(Giveaway) A War Within: The Gladiator by Nathan D. Maki 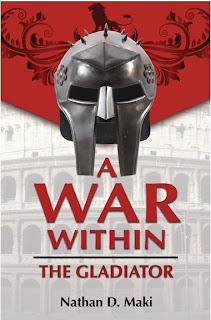 “All the saints salute you, including those of Caesar’s household.”

Those words of the Apostle Paul, written to the Philippians, made me think. What an amazing dynamic, that while the Caesars were trying to stomp out the Christians there were Christians right in the palace! That led me to ask myself, What would Christians in Caesar’s palace be doing during the vicious persecutions that punctuated the Empire’s relations with this new-fledged sect?

The protagonist of A War Within: The Gladiator is 17-year-old Antonius, whose father Titus is Emperor Commodus’ steward but also secretly leads a small church group. When the Emperor sends Antonius to carry a message to the Praetorians Titus learns that it is an arrest warrant for his church, including his wife and daughter. Antonius races to warn them, but arrives too late, and the resulting tragedy leaves him bitter and angry toward God and vowing vengeance on the Emperor. The brutal gladiator master Scipio plans to mold this angry young man into a gladiator, leaving Antonius warring within. Will he forsake his faith and fight or will he refuse? If God is truly faithful how could this happen? And how could God demand that he forgive?

One of the greatest joys of writing historical fiction is those moments during the research process when you stumble upon some detail, some event, some facet of the historical truth which is, in fact, stranger than fiction. These discoveries often fit perfectly, or with small changes allowed by artistic license, with the flow of your novel. Other times these nuggets will be so dramatic and gripping that they will demand a change in the flow of the book.

In A War Within: The Gladiator, Antonius Maximus and his friend, Theudas ben Yair, both have reason to hate Emperor Commodus. The Emperor made Antonius unwittingly carry his own mother’s death warrant to the Praetorian Guard, and he killed Theudas’ father in a gladiator bout. The two young gladiators escape from the Ludus Magnus – the gladiator school in Rome – and swear vengeance on the Emperor. As I was researching Commodus and the Coliseum I discovered an intriguing fact. There was a secret passage that led into the Coliseum for the Emperor to use to come and go. More than that, there was actually a failed assassination attempt that took place in that passage! 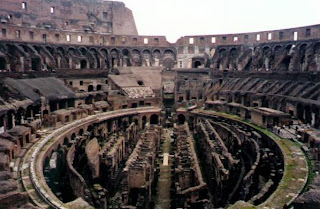 Edward Gibbon, in writing The Decline and Fall of the Roman Empire, records “One evening, as the emperor was returning to the palace, through a dark and narrow portico in the amphitheatre, an assassin, who waited his passage, rushed upon him with a drawn sword, loudly exclaiming, "The senate sends you this."

The assassin’s shout warns Commodus just in time and the Emperor escapes death. What potential for a gripping scene! I set Chapter 17, “To Kill an Emperor” here in this passage.

Fifteen feet below the very feet of the marching patrol Antonius and Theudas crept quietly around the bend to the right that would take them directly under the soaring walls of the Coliseum. Antonius held his torch high, surprise registering on his features. Here the plain rough-hewn tunnel turned into lavish luxury. Dark stone walls gave way to the translucent glow of white marble and alabaster. The vaulted ceiling was covered in lavishly-patterned stucco, the floors paved with intricate mosaics. The Emperor’s secret entrance!

Plug my characters into this historical event, change the assassin’s shout to Antonius’ cry “For my mother!” that foolishly warns Commodus of their ambush and allows him to escape, and you have the ingredients for a powerful chapter. Discovering hidden gems of history and rolling them together with fiction into one entertaining and informative whole that brings the past alive: what could be more fun than that?

A War Within: The Gladiator is available in paperback at http://pentecostalpublishing.com/product/war-within or as an e-book on Amazon.com.
Readers can connect with me on Twitter @NathanDMaki, on Facebook under A War Within,
or on my website at www.NathanDMaki.com

The author is offering a giveaway of one paperback copy to anyone in the US or Canada. Simply ask him a question regarding his work and leave your email address so that you may be contacted! Extra entries for those that follow him on Twitter or Facebook, linked above.
Posted by BurtonReview at Tuesday, March 26, 2013