Please welcome another review from Jennygirl of Jenny Loves to Read. She writes that this book was a biography of Madame de Stael who was an important figure in society during the French Revolution. 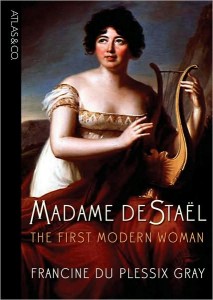 
"A writer of scintillating style and resonant substance," (Publishers Weekly), bestselling author Francine du Plessix Gray chronicles the incandescent life of the most celebrated woman of letters of the Revolutionary and Napoleonic era.


The daughter of the second most important man in France, Louis XVI's Minister of Finances, Jacques Necker, Madame de Staël was born into a world of political and intellectual prominence. Later, she married Sweden's ambassador to the French court, and for a span of twenty years, she held the limelight as a political figure and prolific writer. Despite a plain appearance, she was notoriously seductive and enjoyed whirlwind affairs with some of the most influential men of her time. She always attracted controversy, and was demonized by Napoleon for her forthrightness, the sheer power of her intellect, and the progressiveness of her salon, which was a hotbed for the expression of liberal ideals. The emperor exiled her, on and off, for the last fifteen years of her life.


Madame de Staël—force of nature, exuberant idealist, and ultimate
enthusiast—waged a lifelong struggle against all that was tyrannical, cynical,or passionless in her time, and left a legacy of enlightened liberalism that radiated throughout Europe during the nineteenth century.

Truth be told I picked this book up based on it's cover. Yes, I do judge books by their covers...sometimes. It is a biography, and I have never had any luck with these. This one however, was well written and to the point.

The author doesn't relate the entire early childhood. Just the parts necessary to the story, and her development as one of the greatest conversationalists of France. Madame de Stael had the most prominent salon in France. She entertained many prominent and important persons involved with the future of France, such as Tallyrand. de Stael was friends with those persons one needed to be friends with in the days of the revolution and the Terror. She also counted many royals and aristocrats among her friends. I guess you can say she straddled the political fence. de Stael was very involved in the politics of France, throughout her entire life actually, which includes the French Revolution to Napoleon's empire.

Madame de Stael's musings regarding the reasons behind the Terror, why and how it became so out of control, are very insightful. In my opinion, her arguments are logical and on point. Later, she goes toe to toe with Napoleon in her writings, and it's quite comical to read what he has to say about her.

I guess I was really taken with this book, because I had never heard of Madame de Stael, and apparently her writings were very influential during her tumultuous times. Is it because history is written by men, thus this great woman was left out? I haven't extensively studied the French Revolution or French history for that matter, however from what I read in this book, I can not believe I have never heard of de Stael before. Regardless of whether you agree with her tactics or views, it seems to me that de Stael truly loved her adopted France, and just wanted the best for her country and its people.

It should be noted, that her personal life was a quite a mess. The time and effort she put into French politics, could have been better spent on her family. However, due to her upbringing and other factors, this probably never occurred to her.

Overall, this book was a quick and easy read; it didn't read like a biography to me. I found the book and it's subject matter very fascinating. I would highly recommend this book. Madame de Stael was a fascinating women before her time, and she deserves her place in history.

I think I see some historical research in my future, with respect to women in history and the French Revolution.

Reprinted with permission from Jennygirl of Jenny Loves to Read. If you would like to submit a review, please click this link for further information.
Posted by BurtonReview at Friday, July 23, 2010