Please welcome author Gillian Bagwell with the following article which is amongst a series of articles commemorating the 350th Anniversary of the Restoration of Charles II,  at which time coincided with the reopening of the playhouses and also brought the first actress to the stage. This article relays the regicide trials of those who sat in judgement against Charles I and signed his death warrant in 1649. The list of articles can be found at the author's website. Her newest historical fiction release, The Darling Strumpet, will be available January 2011. 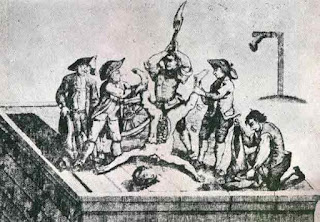 By early October 1660, rumors were beginning to leak about the scandal roiling around the Duke of York and the pregnant Anne Hyde that had consumed the court for so much of September. On October 7, diarist Samuel Pepys wrote that he had dined with his patron the Earl of Sandwich, “he all dinner time talking French to me and telling me how the Duke of Yorke hath got my Lord Chancellors daughter with child, and that she doth lay it do him. Discoursing concerning what if the Duke should marry her, my Lord told me that among his father’s many old sayings that he had writ in a book of his, this is one: that he that doth get a wench with child and marries her afterward it is as if a man should shit in his hat and then clap it upon his head.”

The Duke himself was starting to act as if he thought the same. He stopped the secret visits he had been making to Anne and began to think of renouncing the marriage. This bad behavior was probably due to the Iago-like whispers of his friend Sir Charles Berkeley, who argued that the marriage wasn’t valid because the King Charles hadn’t approved it beforehand, and also claimed, without a hint of truth, that he and others had slept with Anne.


The King continued to be occupied by the business of disbanding the army and arriving at some kind of settlement of religious matters and the issue of tolerance for various faiths. He wanted to extend tolerance to Catholics, but couldn’t quite say so directly, and encountered stiff opposition. After much wrangling the promise he had made in the Declaration of Breda the previous spring was repeated, that no man “shall be disquieted or called in question for Differences in Opinion on Matters of Religion which do not disturb the Peace of the Kingdom,” but nothing more specific was promised than tolerance for Anglicans and Presbyterians.
Charles was still rising early to play tennis, and distracting himself from the cares of state by his ongoing work on St. James’s Park. On October 11, Pepys walked in the park with a friend “where we observed the several engines at work to draw up water, with which sight I was very much pleased.” Charles expressed a desire for two gondolas to the Venetian Resident, and gondoliers to go with them, and by the end of the month the Venetian Senate had ordered the boats built expressly for the new King. Pepys also recorded that he had gone to the Cockpit theatre in Drury Lane to see “The Moore of Venice, which was well done. Burt acted the Moore; by the same token a very pretty lady that sot by me cried to see Desdemona smothered.”
﻿
﻿

This performance was part of an intriguing but temporary development in the reestablishment of professional theatre. Tom Killigrew and William D’Avenant, having secured an official monopoly on the right to present plays, brought their united companies together for daily performances at the Cockpit from about October 8 to October 16, performing Wit Without Money, an old favorite by Beaumont and Fletcher; The Tamer Tamed, otherwise known as The Woman’s Prize by John Fletcher, and undoubtedly other plays besides the Othello that Pepys saw. The roster of His Majesty’s Comedians dated October 6 lists Nicholas Burt, Charles Hart, Michael Mohun, Robert Shatterell, John Lacy, William Wintershall, Walter Clun, William Cartwright, Edward Shatterell, Richard Baxter, Thomas Loveday, Edward Kynaston, and Thomas Betterton. Many of these men (no women acting yet!) had been members of the old King’s Company at the Blackfriars Theatre, when the King was Charles I. Baxter and Cartwright, as well as Theophilus Bird, who was working with the company soon, were second generation professional actors, and Bird’s son, also Theophilus, followed in his father’s footsteps, now that acting was once more a possible career choice.
﻿
﻿

The actors’ residence at the Cockpit coincided with a much less pleasant series of ongoing entertainments – the trial and punishment of the men responsible for the execution of Charles I. On October 10, Pepys heard that the 29 regicides “were this day arraigned at the bar at the Sessions House, there being upon the bench the Lord Mayor, Gen. Monke, my Lord of Sandwich, &c; such a bench of noblemen as hath not been ever seen in England. They all seem to be dismayed and will all be condemned without question.” On October 11, diarist John Evelyn wrote, “this day were those barbarous Regicides, who sat on the life of our late King, brought to their trial in the old baily.” 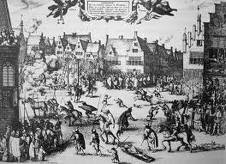 Over the next two days, all but one pleaded not guilty, but Pepys was right. The first conviction was of Thomas Harrison, and the Lord Chief Baron pronounced the punishment for treason, “…that you be led to the place from whence you came, and from thence to be drawn upon an hurdle to the place of execution; and there you shall be hanged by the neck, and being alive shall be cut down, and your privy members to be cut off, your entrails to be taken out of your body, and you living, the same to be burnt before your eyes, and your head to be cut off, your body to be divided into four quarters, and head and quarters to be disposed of at the pleasure of the king’s majesty, and the lord have mercy upon your soul.” Five more of the accused were condemned the next day.


Harrison was the first to die. Pepys noted “I went out to Charing cross to see Maj.-Gen. Harrison hanged, drawn, and quartered – which was done there – he looking as cheerfully as any man could do in that condition.” Not so very cheerfully, one would imagine. “He was presently cut down,” Pepys continued, “and his head and his heart shown to the people, at which there were great shouts of joy.”

Over the next few days the trials and executions continued. By October 16 all the regicides had been condemned, and the rest of those who had already been condemned were executed. Evelyn wrote,“This day were executed those murderous Traytors at Charing Cross, in sight of the place where they put to death their natural Prince… I saw not their execution, but met their quarters mangld & cutt & reaking as they were brought from the Gallows on baskets on the hurdle, O miraculous providence of God.” 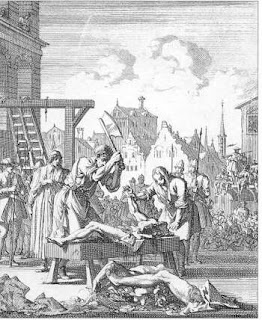 This must have been an incredibly strange time. Londoners were thronging to the Cockpit to see the King’s Comedians, and no doubt some of these same people were crowding around the scaffold to see the executions. The mood in the playhouse must have been peculiar, and it must have been hard work for the actors.

On October 11, after describing the butchering of Harrison, Pepys wrote “From thence to my Lord’s and took Capt. Cuttance and Mr. Sheply to the Sun tavern and did give them some oysters. After that I went by water home, where I was angry with my wife for her things lying about… Within all the afternoon, setting up shelfes in my study.” On October 19 he recorded, “This morning my Dining-room was finished with green Serge hanging and gilt leather, which is very handsome. This morning Hacker and Axtell were hanged and Quartered, as the rest are. This night I sat up late to make up my accounts ready against tomorrow.”

It was getting pretty bad in the neighborhood of Charing Cross. The residents complained that the air smelled of burnt bowels, and petitioned the King not to carry out further executions there. So the next two traitors were hanged at Tyburn instead.

On October 20, Pepys “dined with my Lord and Lady, where he was very merry and did talk very high how he would have a French Cooke and a Master of the Horse,” and later, “calling at Crowes the upholsterer in Saint Bartholomew – I saw the limbs of some of our new Traytors set upon Aldersgate, which was a sad sight to see; and a bloody week this and the last have been, there being ten hanged, drawn, and Quarterd.”


The King decided enough was enough, and the rest of the sentences were suspended for the time being. Charles now turned his attention back to the matter of Anne Hyde. During a bedside interrogation by a delegation of ladies and gentlemen, Anne affirmed that the child she was carrying was the Duke of York’s, that she had never been with another man, that she and the Duke were married, and that there were witnesses to prove it. Slipping in under the wire of respectability, she then gave birth to a son, the King declared her to be the Duchess of York, and James, the repentant Duke, came creeping back to her side and agreed that she was his wife after all.

On October 28 Charles consecrated five bishops. On October 29 the new Lord Mayor was installed, and the Right Worshipful Company of Merchant Taylors produced a lavish Lord Mayor’s show, with two pageants. Both Pepys and Evelyn saw the pageant at Cheapside, “with the royal Oake, & historie of his Majesties miraculous escape at Bosco-Bell &c.”

﻿
﻿ The drama for the month was not quite over. The Duke of York set out to meet his mother Queen Henrietta Maria and his youngest sister Minette, who were arriving from Paris, and with the entire fleet, conducted them into Dover harbor. Charles followed a few days later, accompanied by his sister Mary of Orange and cousin Prince Rupert, and rendezvoused with the rest of the royal family on October 30. The Queen had arrived.

Gillian Bagwell is the author of the upcoming novel The Darling Strumpet, based on the life of Nell Gwynn, who rose from the streets to become one of London’s most beloved actresses and the life-long mistress of King Charles II.

This is the sixth in a series of articles chronicling the events from May 1660 through January 1661, in commemoration of the 350th anniversary of the Restoration of the English monarchy, the reopening of the playhouses, which had been closed for eighteen years under Cromwell, and the first appearance of an actress on the English stage, in contrast to the old practice of boys playing women’s roles.

The Darling Strumpet
The tumultuous life of Nell Gwynn, beloved 17th century actress and royal mistress.
and
The September Queen
The unbelievable true escapade of the ordinary English girl who saved the King and the monarchy.
Both coming from Berkley Publishing Group in 2011.

For links to the other articles and information about Gillian’s books, please visit her website, http://www.gillianbagwell.com/
Posted by BurtonReview at Monday, December 06, 2010