The RAVEN and the WOLF: Chronicle II - Land of Ire By Christopher Spellman

There is currently a giveaway contest for June. Two winners will receive a free copy of Land of Ire. Details on my blog: http://christopher-spellman.tumblr.com/ 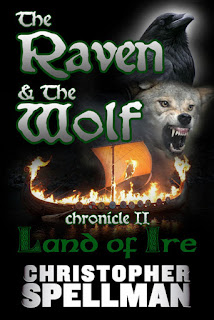 The sequel to The Raven  the Wolf trilogy's 2010 debut novel Blood Oath, Land of Ire continues the dramatic saga of two Anglo-Danish brothers on the isle of Britain embroiled in a bitter, dark age blood feud.


Synopsis:
940 AD. Having departed alive and triumphant from the blood-washed fields of England's greatest battle, Wulfric, the ill-starred brother and rival of a Viking Jarl, makes way homeward in hopes of finding the peace of a simple life. But his fate-threads are intricately and sinisterly woven toward a less forgiving destiny.

The Norse King of Ireland, though vanquished, has yet to abandon his aspirations to the throne of Jórvík, the seat of power in Northumbria. The walls of the old city surrounded and the shadow of misfortune falling, Wulfric must rally his brotherhood of warriors in hopes of safeguarding their homes and families.

In this second and equally foreboding tale of The Raven & the Wolf, the sworn brethren forged by Wulfric must follow a noble calling, journeying toward an unfriendly land across a sea that is both lonely and rife with menace. But what lies in between is a path sown with peril, injustice and a menagerie of wayward foes and unlikely allies.

The gods are restless and the seas reddening with the blood of the damned. Just who will survive the upheaval the Norns are left to decide.

Email ThisBlogThis!Share to TwitterShare to FacebookShare to Pinterest
Labels: 2011 Releases