Giveaway! A Rather Remarkable Homecoming by C.A. Belmond 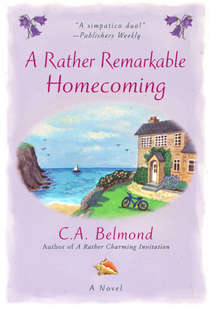 Written with her trademark wit, wisdom and verve, C.A. Belmond’s A RATHER REMARKABLE HOMECOMING (NAL Trade; September 6, 2011) is the fourth novel in a RATHER delightful series, featuring her beloved and thoroughly likeable characters, Penny and Jeremy, who often find themselves in hot water as they investigate historical mysteries that take them globe-trotting to Europe’s most glamorous locales.


In A RATHER REMARKABLE HOMECOMING, Penny and Jeremy return from their honeymoon to their London townhouse, only to be greeted by emissaries of Prince Charles, who has a special assignment for them. His Royal Highness would like them to solve an historical mystery in Cornwall, England, in the hopes of rescuing the charming village where Penny and Jeremy first met as kids. A property developer is bulldozing his way across the seacoast’s countryside. Now the only hope for rescuing the beautiful area is if Penny and Jeremy can solve an Elizabethan riddle, leading to a far greater quest than they bargained for.

Amid Celtic lore and tales of Shakespeare, smugglers and shipwrecks, Penny and Jeremy contend with an eccentric cast of Cornish locals: a posh restaurateur, a bird-watching earl, a vain actor, a New Age farmer, a rebel rock-and-roller and a band of determined “eco-warriors”. Their mission takes the intrepid pair to the lush island of Madeira and the legends of Tintagel, in a race against time to stop the wrecking ball from striking.

Are you interested in joining Penny and Jeremy for a voyage of travel, food, wine, love and life’s little pleasures? The publisher is offering one lucky follower of HF-Connection a copy of A RATHER REMARKABLE HOMECOMING.

To enter for the book giveaway, please leave a comment with your email address, and be sure to remember to follow HF-Connection! Open to followers in US/Canada. Ends September 2nd, 2011.

Email ThisBlogThis!Share to TwitterShare to FacebookShare to Pinterest
Labels: 2011 Releases