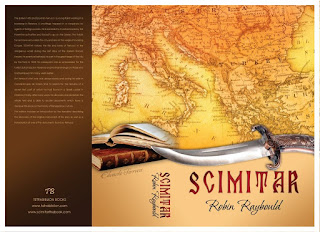 THE STORY
The date is 1439 and Eduardo Ferrucci, a young Italian working in a bookshop in Florence, is unwittingly trapped in a conspiracy by agents of foreign powers. He is banished to Constantinople by the Florentine authorities and forced to spy on the Greeks. The Turkish forces have surrounded the city and are on the verge of invading Europe. SCIMITAR follows the life and loves of Ferrucci in the dangerous world during the last days of the Eastern Roman Empire, his eventual betrayal, his part in the great siege of the city by the Turks in 1453, his subsequent role as ambassador for the Turkish Sultan back in Florence and his final revenge on those who had betrayed him many years earlier. But Ferrucci’s first love was always books and during his exile in Constantinople he makes time to search for the remains of a secret text, part of which he had found in a Greek codex in Florence. Finally, after many years, he discovers and deciphers the whole text and is able to locate documents which have a decisive influence on the history of Renaissance culture. This edition includes an introduction by the translator describing the discovery of the original manuscript of this story as well as a transcription of one of the documents found by Ferrucci.

"Robin Raybould has a certain unmatched dedication to historical accuracy."Scimitar" is a fine addition to general fiction and is very highly recommended." (Midwest Book Reviews)

"Compelling...fascinating and awe-inspiring...I suspect this was Raybould's ultimate aim-to inspire his readers into reveling in antique literature and philosophy, and expanding their minds exponentially.  If so, he has achieved his aim." (The Compulsive Reader)


For further information contact Robin Raybould at rraybould@camrax.com or at Camrax Inc: 212 410 6154.  Visit www.scimitarthebook.com and jump on the carousel!

Robin was kind enough to offer one copy of his book for giveaway!


To enter for the book giveaway, please leave a comment with your email address, and be sure to remember to follow HF-Connection! Open to followers in US/Canada. Ends September 20, 2011.