Giveaway details can be found at the end of the post and author info.  Giveaway extended until January 15, 2012!!!


Publishers Weekly: White Seed… hews closely to the record of Sir Walter Raleigh's second doomed attempt to plant the British flag in Virginia… The depiction of the colony's physical and moral disintegration between 1587 and 1590… evokes a harrowing sense of human fallibility. Readers… will find this saga, which… soon achieves page-turner velocity, to be both a dandy diversion and an entertaining education.

The historical record by itself is a riveting read: 1587. The colonists’ ships were crewed by riff raff more intent on seizing Spanish ships then getting their charges to the New World. When they spotted a ‘prize’ moving up the coast, the colonists were put ashore in a ‘bad neighborhood’ (Roanoke, where the local natives had been brutalized by the last group of English to live there; the actual destination of the colonists was Chesapeake.) Then, Governor White was sent back to England (I get into the why in White Seed). When he arrived, the Armada was threatening and no ships could be spared. He wouldn’t return until three years later.

In July of 1590, three ships anchored off Hatarask, one of the barrier islands. Governor White tells us in his writings, “… we let fall our grapnell neere the shore and sounded with a trumpet a call, and afterwards many familiar English tunes of songs, and called them friendly; but we had no answer…”

In White Seed I dramatized the event thus:

Captain Cocke and the others were silent as they sat in the boats and listened. “I think we had better spend the night in the boats,” said Cocke. We will go ashore at daybreak when it is safer.”

“Aye,” said White, relieved that the captain had not ordered the boats back to Hatarask.

Cocke called his orders over to the other boat and White heard their anchor splash into the sound. The men behind him dropped anchor. The rope thrummed as it ran out. As the anchor took hold, the boat swung about and came to rest in the currents, its stern to the island. The men shifted about as they lay claim to their spaces to lie down for the night.

White listened to the quiet of the island. The familiar smells of chamomile and dandelion reached his nose. He stood and hailed again. “Ananias Dare! Parson Lambert! Captain Stafford!”

Silence hung heavy in the air as everyone waited for a response. None came.

The men again began talking quietly among themselves.

“Governor White,” said Captain Cocke, “perhaps a round of song will do the trick.”

“Men,” said Cocke, “let us sing a few verses. That is how we shall rouse them.”

“You mean that is how we shall roust them,” said Chandler.

The men laughed. Cocke started the song in the dark, “’Twas a lover and his lass...”

Cocke's voice rang out, “That o'er the green cornfield did pass...”

White listened wordlessly, hoping those on shore would hear. He pictured again his tiny little granddaughter, Virginia. She would be three years of age now. Why had they not come out, he wondered. What in God's name had happened? 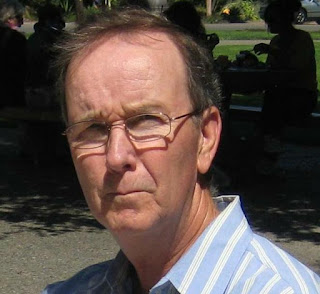 Paul Clayton is the author of a three-book historical series on the Spanish Conquest of the Floridas ― Calling Crow, Flight of the Crow, and Calling Crow Nation (Putnam/Berkley).

One of his books, Carl Melcher Goes to Vietnam (St. Martin’s Press, 2004), was a finalist at the 2001 Frankfurt eBook Awards, along with works by David McCullough and Joyce Carol Oates.

Paul’s latest historical is White Seed: The Untold Story of the Lost Colony of Roanoke.

White Seed is available for purchase at Amazon


THIRTY WINNERS TOTAL!
Entrants will receive one extra entry for each Facebook and tweeted link to this giveaway (come back and share the link in the comments each time you share).  Also, please leave a way to contact you in the comments.  Since this is such a huge giveaway, it will end on December 31, 2011 January 15, 2012 at 11:59pm CST.  Good luck!

Addendum:  If you are in the U.S., please indicate if you prefer the paperback or eBook version.  That way I'll know who to award the paperbacks too.  Thank you! And thanks to cyn209 for helping me to realize the necessity for this stipulation.