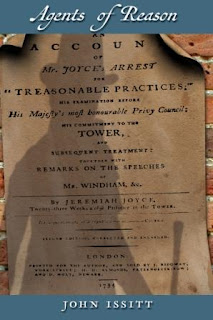 Agents of Reason by John Issitt

In July 1789 the working class Jeremiah was training to be a dissenting minister. He was a political radical who thought the French Revolution would spread and introduce a fairer society.  His highly respectable tutors wanted reform but were unwilling to put themselves in danger. They recruited him to promote their interests and arranged his employment with the Aristocrat Charles Earl of Stanhope ostensibly as tutor to his children but in reality to coordinate the actions of reformers. He organized radical groups, helped print Tom Paine’s Rights of Man and attempted to expose the injustices of William Pitt’s aristocratic government. In his lifetime he was a dangerous man to know. Association with him could result in charges of sedition or treason and a trip to Botany Bay. Little was therefore written down and if it was, quickly destroyed.  Furthermore, Jeremiah was used when it suited his upper class associates and ignored when he became an embarrassment. Records of his doings are therefore very few – a silence which motivates the writing of this novel.

Agents of Reason emerges from 20 years of research, a doctorate and 4 summers snatching every possible second to write. Built from real events and real characters it opens with news of the Fall of the Bastille and closes with the Treason trials of 1794.

Jeremiah and his associates don’t figure very highly in the standard histories.  Their lives and contribution have been subject to an historical eraser through the combination of minimal archival record, later embarrassments about former enthusiasms and a historical focus on the more profile historical actors Jeremiah worked quietly behind the scenes – he never took centre stage.

Agents of Reason was written in the interests of recovering a man whose actions have been critical in securing the freedoms we enjoy today.

John Issitt works part time for the Department of Education, is Provost of Langwith College and a National Teaching Fellow; visit the author's site at http://johnissitt.blogspot.co.uk and look for his book on Amazon Marketplace and in eBook format.

Giveaway ends December 14, 2012
Winner has 24 hours to respond with their mailing address.
Posted by BurtonReview at Wednesday, December 05, 2012