(Giveaway) Vedette: or Conversations with the Flamenco Shadows by Stephen Siciliano

Introducing Stephen Siciliano, author of Vedette: or Conversations with the Flamenco Shadows:
(Giveaway instructions at the end of the post!)

Born to a Gothic social order, branded a haunter of men's dreams, Vedette is traumatized when her small town in the magical wetlands of southern Spain's Guadalquivir River is overrun by hashish-smoking anarchists promising free love and a life without sadness to those who would follow them.
Entranced by their flamenco music, their philosophy of revenge, and the concrete ability to deliver political results, the young woman joins a movement destined to annihilation and becomes its sole survivor, burdened with the task of keeping its memory and project for a better world alive through conversations with their flamenco shadows.

Transcending political viewpoints, Mr. Siciliano opens a new chapter in the understanding of the Spanish Civil War, opting for a literary interpretation that looks beyond right and wrong to more universal lessons only the passage of decades and the healing effects of time can reveal. 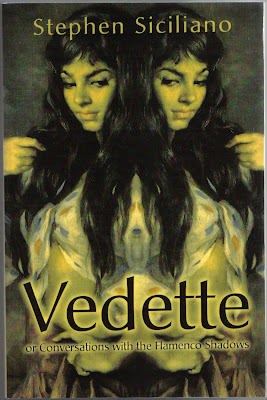 Please welcome the author Stephen Siciliano with the following piece:


The Persistence of Memory
Today, Spain is a vanguard country in matters of Western culture.
Catalonia's famed chefs are trailblazers in the culinary arts. Iberian architects have shaped a next generation of infrastructure the world over. The national soccer team has reinvented the sport internationally with an artistic rethinking of tired and defensive stratagems.

But it was not always thus.

Beneath the ideological banners brandished during the Spanish Civil War was a cultural conflict between a kind of gothic Catholicism and a hyper-modernism represented by the likes of painter Salvador Dalí , filmmaker Luis Buñ uel, and poet Federico Garcia Lorca.

"Everything conspired against the old culture. Picasso broke the intangible lines of painting with an anarchy of volumes and colors. Negroes in smoking jackets crowded theater stages as intellectuals went for Josephine Baker's skirt of bananas and her war upon the sweetness of the Viennese waltz. All exotic art, be it Negro, Indian or Malaysian gained admittance with a promise to break the clean and Catholic lines of the old museum."

Clearly, beyond the battle lines, other "lines" were being contested in 1930s Spain.

As history would have it, de Foxha's side, the Fascist side, triumphed along with the "clean and Catholic lines of the old museum."

Picasso stayed away, Garcia Lorca was murdered, Buñ uel fled to avoid a similar fate and modern culture was swept under the rug for 37 years with Spain pinned beneath the thumb of dictator Francisco Franco.

When the Generalissimo finally died in 1975, Spain was a land locked in time, a fly in amber, and those who rushed to breathe the post-dictatorial atmosphere found a country of pious and agrarian ways peppered with subversive workers groups, a 19th Century backwater.

Many of the issues sorted through in the West during and following World War II, remained unresolved in Spain so that its intellectual landscape resembled that of its countryside, characterized by the burro, the woman veiled in black, the broken-backed farm laborer.
To visit Spain for many years after was to witness walls exploding with the blood paint of revolutionary communists, the foreboding red and black flag of the anarchists, the predatory eagle of the Fascist Falange.
The writing of "Vedette or Conversations with the Flamenco Shadows," a novel of the Spanish Civil War, benefited from this overlapping of the past upon the present.
Historical works are often beholden to book research coupled, perhaps, with a visit or stay in the location where the story unfolds.

The writer hopes to be moved by the atmosphere, to internalize the lighting and shadows,
the scent of the air, read the ancient visage of the populace for clues and thereby infuse an academic exercise with human breath.

The development of "Vedette" entailed an almost organic connection to the time and happenings it recalls. Current-day events and personal experiences in that whirlwind, post-dictatorial environment inform the work so much more than the books contained in its bibliography.

Add to this the fact "Vedette" unfolds in Seville, a city that revels in its past and repels the future, and what you have are events recounted as they went down in much later days, fitting naturally into a world sixty years removed, yet hardly disappeared.
The novel began to take shape when the world of old Andalusia was opened up to this author by a scion of the Counts of Peñ aflor. They were ancient landlords in the region and to experience southern Spain through their customs was necessarily an exercise in Old World culture.

The family matriarch, a lovely and beautiful woman formed in the chrysalis of Spanish aristocracy was always a personality that impressed.

Tall, lithe, blonde-haired and blue-eyed, soft-spoken, yet iron-willed, she became template for the novel's Countess of the Rivers, a major character representing all that was traditional in Spain.
The behavior of a barbarian bohemian from Southern California was often the subject of her gentle remonstrance and disapproval, if not bemusement. It depended.

For example, after having patiently engaged in a drunken phone conversation over ten thousand miles of telephone wire she politely commented, "Well, yes Stephen, that's fine, but it's three o'clock in the morning."

In "Vedette," the blasphemous anarchist Santi Ordoñ ez explains the Countess's summary detention with a long rant about the injustices visited by aristocrats on the laborers. Her tempered response is, "Well, yes Santi Santi Ordoñ ez , that's fine, but it's three o'clock in the morning."

It's an exchange that resolves a moment of high tension, of class-based confrontation, in a way that would be unique to Seville, an authentic expression of Andalusian temperament and irony.

Once, sitting around a fountain in Plaza Doñ a Elvira during siesta hour, a young anarchist questioned a man in uniform passing through the square. "You, in the uniform! What are you from?" The man in uniform announced that he was a sailor.

"Well then, I curse the Navy and say the Navy is ---." And so forth, joined by his fellows in verbally haranguing the sailor from the plaza. Moments later, the police stormed into the square, giving chase to the fleeing black clad rebels.

Escaping with a failed bullfighter named "Vinagre" (Vinegar), yielded a tour a Seville's lush park gardens as the impromptu guide pointed out all that was free in the regal city, all that was "his," yet everyone else's.

Reaching for an orange from a tree, he noted that they were bitter to some, but not to the blessed, before taking a satisfying bite.

It's hard to make such stuff up, it's the poetry of the people, and healthy amounts ended up in the novel, experienced not by the author, but by his anti-heroine, the flamenco singer and radical, Vedette.

At the time of its writing, Seville was cultivating a long-running crush on an aging bullfighter named Curro Romero who was known for being rarely, yet unforgettably brilliant, but more often terrible, even cowardly.

"Vedette" appropriates his legend for the character Espla de Paula, the protagonist's ill-fated lover. Press notices of Curro Romero's triumphs and tragedies are translated and lifted whole from the day's newspapers, dropped into the 1930s ferment, yet ringing with authentic Spanish bullfight prosody, conveying the popular passion for "los toros."

Political demonstrations, strikes, squatter actions, soccer matches, flamenco vigils were all woven into the fabric of a country passing through a unique stage of development, sorting out issues of the past in preparation for a giant leap forward, fueled by years of repressed sensuality, political thought, and cultural innovation.

Entire swathes of that fabric were sewn into "Vedette."

And clearly, there are advantages to writing recent history. The accent of the events over the years can still be strong, especially when some from the epoch are still alive giving voice to its politics, music, and attitudes.

By the end, the mission had shaped the book itself and "Vedette" became a novel that meditated much upon the purpose and point of memory.

In the annals of revolutionary Andalusia, the peasant commune at Lora del Rio stands as a moment fleeting triumph followed by benighted martyrdom. The rebels of the Andalusian village were eventually defeated by the superior Fascist force of a butcher by the name of General Queipo de Llano.

Along with many of their families and elected representatives of the duly elected Republican government, the insurrectionists were summarily executed and dumped into a mass grave.

Some sixty years later at party in Carmona, about 30 minutes away from Lora del Rio, I ran into a fellow who hailed from there. I was incandescent and proudly dove into my trove of knowledge about the saints of the commune.

He seemed nonplussed, but was polite enough, in the Sevillan fashion, to let me finish.
Than he said, "Your heroes killed my grandparents."

Though painfully obvious after the awkward exchange, it had never occurred to me the revolutionary workers would have had to wreak a little havoc in gaining control of Lora del Rio. Only the flavor of their martyrdom interested me for the story.

But this proximity to the pain and real facts of the Spanish Civil War led to a balanced and ironic view that rubbed partisans of both sides the wrong way after publication. Someone, it seems, must be wholly right.

Researching novelists often learn a more complex story and that is theirs to relay. Experiences like these turned the intended novel from a kind of retro-workerist tract of that time, to something more nuanced and, hopefully, insightful.
In giving the novel a Hoffer Award, the committee noted, "Vedette is part Lolita and mostly survivor, and much to the author's credit her story is told in shaded points of view that only increase the mystery."

It's easy to think of the Spain from which "Vedette" drew so much vitality as mostly gone. It modernized, the anarchists and communists were slowly cooled out, the political class moderated itself, and corporate influence was imposed over large parcels of Spanish life.

It's a matter of how strong history really is, for the events a historical novelist focuses on are not static. They are the source of repercussions and these we live. Deciphering their roots is useful work.

Do progress, freeways, and universal pop culture finally and irrevocably erase the old ways of being and thinking, or does their "persistence in memory" remain a novelist's treasure to be discovered by taking the leap, living the life, and scraping away at the surface of modernity?
Each book and each writer may come up with a unique response to this question.

Vedette is available on Amazon, click here to purchase.

If you would like to read Vedette, enter to win your own paperback copy of Vedette by commenting below. Please leave your email address so that I may contact you.

Posted by BurtonReview at Thursday, January 17, 2013