Chronicle of the Mound Builders by Elle Marie 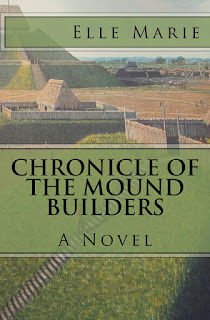 Please welcome Elle Marie as part of her virtual tour while promoting her novel, Chronicle of the Mound Builders.

I had a lot of fun creating symbols to use in Chronicle of the Mound Builders. As Angela Hunter deciphers the title page of each section of the mysterious chronicle, she reveals another clue to the mystery. Each chapter title contains Aztec pictographs, spelling out the title.

In Aztec writing, symbols can be used for an actual word (such as drawing an eagle to mean literally ‘eagle’) or they can represent sounds instead that can be combined to form other words and phrases.

Putting together real Aztec symbols to form meaningful snippets was sometimes a challenge. First, I had to decide what message should be told to foreshadow the next chapter of the modern-day timeline. It had to provide just enough information to give the reader a hint of what was to come, without giving away too much. And once I had formulated a message, I needed to find symbols to approximate that message.

The next challenge was having Angela figure out the puzzle. Actually, this was the easy part. I just reversed the process I had used to develop the message in the first place.

In this chapter, I wanted to hint at the curse that was going to be placed on my Aztec characters. I found the Aztec word teochihua, meaning ‘he blesses it’, and amocualli, meaning ‘evil’. I figured that together, the phrase could be taken to mean a person bestowing a curse, or ‘evil blessing’.

Combining the words for stone (tetl) and dog (chichi) produced tetl-chichi, which has a very similar pronunciation as teochihua. So I found the pictographs for stone and dog and placed them together.

To form a word that sounded like amocualli, I put together the sounds for book (amox) and house (calli). The simple square symbol represents a sheet of paper or book, so I put that above the Aztec pictograph for house. And there you have it - he curses them!

I've been asked if the symbols in Chronicle were real Aztec symbols. The answer is yes - well, mostly. In a few cases I had to get creative to come up with a pictograph to meet my need. I challenge you to try to tell the difference!

Archaeologist Dr. Angela Hunter discovers an ancient codex at a Mississippian Indian dig site in the St. Louis area. Knowing the Mississippians, or Mound Builders, had no written language, she is determined to solve the mystery of the 700-year-old, perfectly preserved codex.

In the early 1300’s, an Aztec family is torn apart. A judge rebelling against the Aztec tradition of human sacrifice is cursed and escapes his enemies with his 12-year-old son. They travel from the Gulf of Mexico up the Mississippi River to settle in the thriving community of Migaduha, modern-day Cahokia Mounds, Illinois.

Angela recognizes the symbols as Aztec pictograms and begins to translate the story. However, other forces also want the codex and will do anything to get it. Can she learn the secrets of the chronicle before the tragic events of the past are repeated today?

Praise for Chronicle of the Mound Builders

Good Blend of Fact and Fiction
"I really enjoyed reading the Chronicle of the Mound Builders. The author artfully wove the timelines, dropping hints as the story unfolded. I also enjoyed trying to figure out the geographic locations since I live in the St. Louis area. The author's descriptions were so accurate that I was able to pinpoint exactly where the action was occurring.

I was so engrossed in the storyline that I read the book in two sittings during one weekend. My husband said that he had never seen me read a book that quickly. I was sorry when I had finished but realized that the author left the story open for a sequel. I look forward to reading that book, too." - Archeology Enthusiast, Amazon Reviewer

Exciting and Informative
"This is an exciting read, a real page-turner. The story travels between the past and present such that the events of the past parallel the discoveries in the present in a timely manner. The story is filled with adventure and mystery. It was written with some intelligence as the author displays in-depth knowledge of ancient Aztec cultures, the Mississippians, and modern day archeological techniques. These are combined into a thrilling adventure. I look forward to the author's next book." - JayCee, Amazon Reviewer 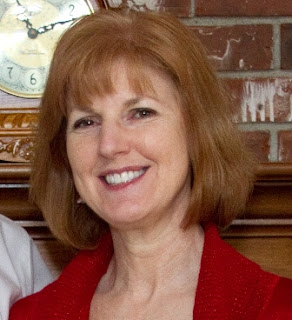 About the author:
Coming from a large family of readers, Elle Marie grew up with a love of reading. Her passion for reading led to a desire to write. After first publishing a nonfiction book, Living the Thin Life, she turned to fiction.

A visit to Cahokia Mounds sparked a fascination with the mysterious Mound Builders, about whom so little is known. What was their culture like? How did ordinary people live in the 14th century? What caused the civilization to vanish, seemingly overnight? She put her imagination to work and came up with a story line that put it all together. Extensive research enabled her to create a believable, engrossing world.

By day, she works in the information technology field at a large financial services firm. She is a graduate of the Missouri University of Science & Technology and lives in the St. Louis area with her husband. Chronicle of the Mound Builders is her first novel.

Visit other blogs on the tour:  TOUR SCHEDULE
Twitter Hashtag: #MoundBuildersTour
Posted by Michelle Stockard Miller at Monday, May 13, 2013