Carol Strickland's The Eagle and the Swan - Guest Post and {Giveaway} 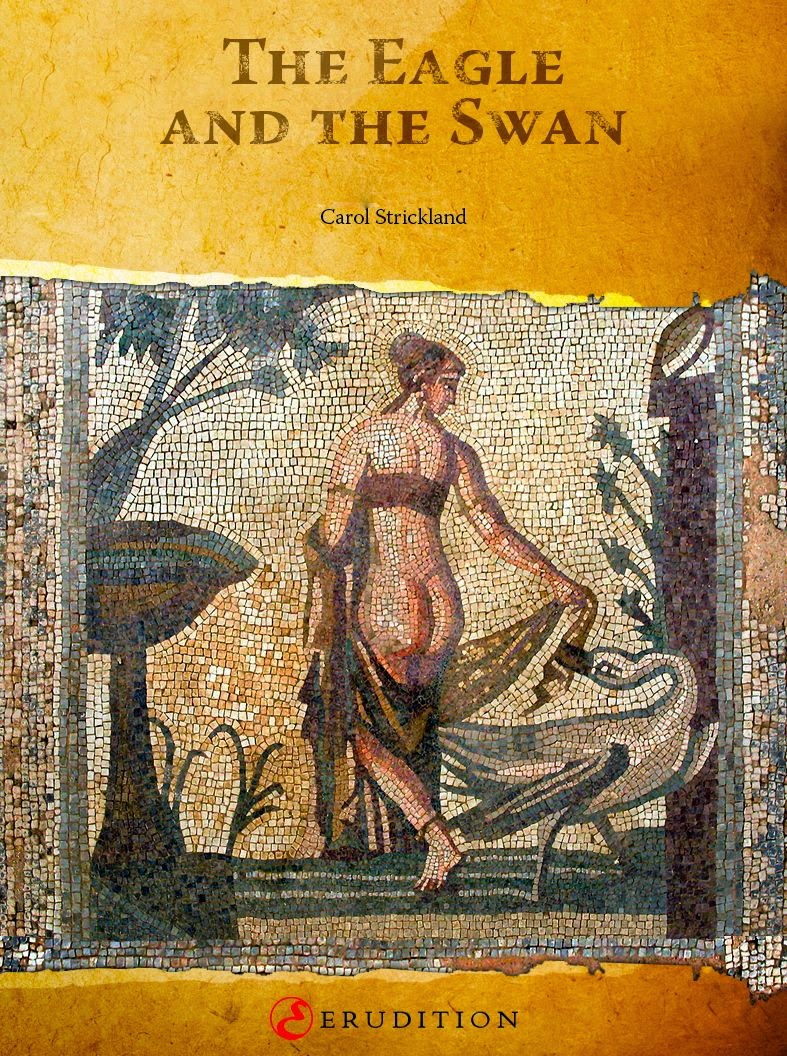 Remember the old saw: “We study history so we’re not doomed to repeat it”? As a reader and writer of historical novels, I’ve been studying Greek history—especially the period of Greece’s golden Age (480-430 BCE). It’s a society worth studying, not to avoid their mistakes so much as to ponder their triumphs.

Life was short, hard, and brutish throughout Greece. But within the space of a few decades in one city-state, Athens, an extraordinary flowering of creativity occurred. Some would argue this outburst of originality in art, architecture, literature, law, government, philosophy, science, and mathematics is unequalled in human history—although Renaissance Italy and Elizabethan England are strong runners-up.

This ancient society, with a population of 400,000, not only invented geometry, logic, and democracy but produced these immortals: the philosophers Socrates, Democritus, Plato, and Heraclitus, the historians Thucydides and Herodotus, the physician Hippocrates, sculptors Phidias and Polykleitos, and architects whose crowning work, the Parthenon, incarnates a pinnacle of imperishable art.

How did they do it? What did this technologically primitive society have that we—with our computers, smart bombs, and satellites—don’t? How might we learn from them and point our civilization towards a cultural peak?

They had a leader well endowed with vision. The statesman Pericles, an idealistic reformer with boundless faith in humanity, set the tone. Under his authority, from 461-429 BCE, Athens achieved a balance between duty to state and freedom of the individual. The humanism of the age encouraged innovation, risk-taking, and free inquiry. There was no fear of change, only of stagnation.

Because of this confidence in the power of the individual, optimism became achievement rather than self-delusion. It led to a roster of accomplishments that still dazzle. Of course, Golden Age Greeks also emphasized rationality and moderation to check disorderly passions, but they insisted that compassion, tolerance, and humor infuse reason with feeling. (Always excepting slaves and suppressed women—they weren’t that far removed from the Neolithic Age.)

A Periclean leader—someone to harness an empire’s energy not for destruction
but construction of a dynamic society—is rare. The sixth-century Constantinople of my novel, steeped in Greek culture mingled with Roman practicality and Christian aspirations, desperately needed such a leader. Empress Theodora tried to persuade her husband, Emperor Justinian, that tolerance and faith in each individual’s potential would create a humane society. Although those two leaders left a legacy of increased rights for women and children, law reform, and glorious church architecture, Justinian never agreed with Theodora that diversity outweighed uniformity.

In a funeral oration Pericles delivered, he cited the main ingredients of a just society. Athenian government “favors the many instead of the few,” he said. “We throw open our city to the world,” he added, welcoming foreigners and never excluding them from opportunity. Advancement was earned by merit, not inherited based on social class. Equal justice was meted out to all. Happiness, Pericles declared, is “the fruit of freedom.”

Coincidentally, Pericles had his equivalent of Theodora. His mistress was the renowned courtesan Aspasia, an intellectual and a philosopher who influenced Socrates as well as Pericles.

I wonder if the Byzantine Empire would have risen to the heights of Periclean Athens if Justinian had heeded his consort’s counsel as Pericles did nearly a millennium before.

History provides no answers, but it does hold out hope.

For 1,500 years she has been cruelly maligned by history. Labelled as corrupt, immoral and sexually depraved by the sixth-century historian Procopius in his notorious Secret History, the Byzantine Empress Theodora was condemned to be judged a degenerate harlot by posterity. Until now. Due to a conviction that its contents would only be understood by generations of the distant future, a manuscript that has remained unopened for a millennium and a half is about to set the record straight. It will unravel the deepest secrets of a captivating and charismatic courtesan, her unlikely romance with an Emperor, and her rise to power and influence that would outshine even Cleopatra. This historical novel traces the love affairs, travails, machinations, scandals and triumphs of a cast of real characters who inhabit an Empire at its glorious and fragile peak. It’s the tale of a dazzling civilization in its Golden Age; one which, despite plague, earthquakes and marauding Huns, would lay the foundation for modern Europe as we know it.

Listen to an interview with Carol Strickland

Praise for The Eagle and the Swan

“It’s a book rife with detail and passion. If you like historical fiction this book hits on all cylinders. The level of detail in terms of prose and historical relevance is engaging. And THEN the plot is what’s moving. The love and lust combined with a compelling story, taking on universal themes from a cross section of history, makes for a gripping work.”

“Carol Strickland has written a masterful epic. It is beautifully crafted and impossible to put down.”

“Beautiful storytelling. Fascinating and well-developed characters. What an interesting time in history! This book was thoroughly enjoyable from start to finish. The Eagle and the Swan is a must-read!”

About the Author
Carol Strickland is an art and architecture critic, prize-winning screenwriter, and journalist who’s contributed to The New York Times, Wall Street Journal, Washington Post, Christian Science Monitor, and Art in America magazine. A Ph.D. in literature and former writing professor, she’s author of The Annotated Mona Lisa: A Crash Course in the History of Art from Prehistoric to Post-Modern (which has sold more than 400,000 copies in multiple editions and translations), The Annotated Arch: A Crash Course in the History of Architecture, The Illustrated Timeline of Art History, The Illustrated Timeline of Western Literature, and monographs on individual artists.

While writing on masterpieces of Byzantine art (glorious mosaics in Ravenna, Italy featuring Theodora and Justinian and the monumental Hagia Sophia basilica in Istanbul built by Justinian), Strickland became fascinated by the woman who began life as a swan dancer and her husband, an ex-swineherd.

Knowing how maligned they were by the official historian of their era Procopius, who wrote a slanderous “Secret History” vilifying them, Strickland decided to let the audacious Theodora tell her story. She emerges not just as the bear-keeper’s daughter and a former prostitute who ensnared the man who became emperor, but as a courageous crusader against the abuse of women, children, and free-thinkers.
Author Links

Visit the other tours for more guest posts, reviews and giveaways - HFVBT TOUR SCHEDULE
Follow the tour on Twitter - #EagleandtheSwanTour

You have the chance to win one of two eBooks of The Eagle and the Swan! Follow the instructions on the Rafflecopter form below to entere...open internationally!