The Burton Review has reviewed Philippa Gregory's new release which has been duplicated here. There are two separate giveaways going on here and at The Burton Review. See the end of this post for more details. 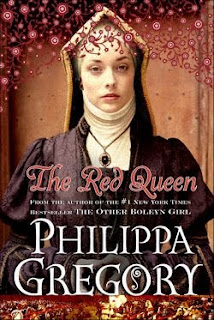 Heiress to the red rose of Lancaster, Margaret Beaufort never surrenders her belief that her house is the true ruler of England and that she has a great destiny before her. Her ambitions are disappointed when her sainted cousin Henry VI fails to recognize her as a kindred spirit, and she is even more dismayed when he sinks into madness. Her mother mocks her plans, revealing that Margaret will always be burdened with the reputation of her father, one of the most famously incompetent English commanders in France. But worst of all for Margaret is when she discovers that her mother is sending her to a loveless marriage in remote Wales.

Married to a man twice her age, quickly widowed, and a mother at only fourteen, Margaret is determined to turn her lonely life into a triumph. She sets her heart on putting her son on the throne of England regardless of the cost to herself, to England, and even to the little boy. Disregarding rival heirs and the overwhelming power of the York dynasty, she names him Henry, like the king; sends him into exile; and pledges him in marriage to her enemy Elizabeth of York’s daughter. As the political tides constantly move and shift, Margaret charts her own way through another loveless marriage, treacherous alliances, and secret plots. She feigns loyalty to the usurper Richard III and even carries his wife’s train at her coronation.

Widowed a second time, Margaret marries the ruthless, deceitful Thomas, Lord Stanley, and her fate stands on the knife edge of his will. Gambling her life that he will support her, she then masterminds one of the greatest rebellions of the time—all the while knowing that her son has grown to manhood, recruited an army, and now waits for his opportunity to win the greatest prize.


In a novel of conspiracy, passion, and coldhearted ambition, number one bestselling author Philippa Gregory has brought to life the story of a proud and determined woman who believes that she alone is destined, by her piety and lineage, to shape the course of history.

The Red Queen The Red Queen is the story of Margaret Beaufort who is the mother to Henry Tudor, who later becomes Henry VII, who begins the popular Tudor rule. The novel opens to a very pious and somewhat haughty nine year old Margaret who learns that even though she feels destined to be an abbess she is instead to be used as the Lancastrian pawn. She was cousin to the Lancastrian King Henry VI who offered her his half-brother Edmund Tudor to wed. It was at this point that I thought that I disliked Margaret. And unfortunately, when I dislike a main character, I tend to dislike the book, such as part of my issue with The Other Queen. Warning bells went off. Thankfully, I read further.

What I wanted from this book is entertainment value. Although I have read a few Wars of the Roses books, both fiction and non-fiction, I have not read anything focused on Margaret and I wanted to learn more about her. What made her promise her only son, the precious Lancastrian heir, to the enemy Yorkist Elizabeth Woodville's eldest daughter? What propelled Margaret to continually strive to get her son on the throne? In my Tudor novels, she is often portrayed as the elderly mother to Henry VII, and as being overbearing and obnoxious to Elizabeth of York. So, who really was Margaret of Beaufort? Gregory gives her a voice with this novel, and I was not disappointed.

Gregory portrays her as an annoying child who feels superior to everyone and wants to be noticed as such. Since this is stressed over much with the Joan of Arc theme, it gets a little tiresome. But, after awhile, Margaret grew up into her twenties and thirties and she in turn grew on me. Even though she continued to feel destined for greatness and never doubted herself or Joan of Arc, the story evolved in such a way that Margaret's destiny was something that I could not wait to see how she fulfilled it. If anything, Gregory makes the reader admire Margaret's tenacity. I hated her, liked her, hated her..Perhaps the most intriguing thing for me was that she was devious, yet still pious. Odd combo, eh? Twenty-eight years of waiting for her son to take their family's rightful crown, and the story followed Margaret as she helped to make it happen. And as I have been a Yorkist-in-training with my previous reads, I had always had the lingering impression that the Tudors were a grasping bunch, and that the Beaufort boy was pretty darn lucky to have wound up on the throne like he did all because of a single battle. What a different view this paints! I almost believe that the Yorkists never had a right to be up there at all! (ducks head swiftly..)

And oh, the dear prodigal son Henry.. I have always had him pictured as miserly and almost frail in comparison to his boisterous son, Henry VIII. Gregory shows his character as being a darling brown-headed child that Margaret misses very much during his childhood that he spent with Jasper. The fact that he understood his calling, and that the Lancastrians were so patient before they finally pounced on the Yorks... I was awed. Of course, in order for Lancaster to have a leg to stand on, they needed French backing, and Henry was always looking around for his protector Jasper during the fight.. but still.. very intriguing. I have read books that focused on the York view, from Richard of Gloucester to Elizabeth Woodville, that this Lancastrian view from Margaret Beaufort was really intriguing for me. And Lord Stanley, Margaret's third husband, I do believe he is the epitome of the term "turncoat". Another one of those characters you love to hate. Always an enticing topic, the mystery of the ill-fated princes in the tower was also well played in this telling. Even though it still saddens me when I think of it. How would history be different in they had lived?

I really enjoyed how Gregory wrote this story, and the fact that I am being pleasantly entertained is all that I need when I am settling in to read a novel such as this. Being a casual Wars of the Roses reader, historical inaccuracy was not something that leaped out at me with this read, although again there will be many things that are debatable for all time. I love this era, I love this point of view, and I am so glad that I had a chance to read this novel and get another facet to an important historical event. (ducks again..)

As mentioned in other reviews, the letters that were exchanged between Margaret and her husband or Jasper were so far fetched that their appearances brought the plausibility of the novel to a lower level. Another annoying nagging thought I had while reading this was regarding the title. Who exactly was the Red Queen? Margaret was not it, although perhaps she wanted to be, and supposedly the publishers wanted her to be. The book ends in 1485 with Henry's success and with Margaret once again saying she should be treated as royalty as the king's mother. I can only applaud Margaret's success as well (leaving the horrifying fact aside that she may have had something to do with the murder of innocent children...but we'll never know..). She was only a ruler during her brief regency after her son died in 1509 and a young Henry VIII came to the throne. I wish the publishers had attempted to market this series with titles that would intellectually work for each book. Just because The White Queen title was accurate with the last one doesn't mean the same is true for The Red Queen. The ending sequence with the shift away from Margaret and then a quick obligatory zoom in on her to finish it off was too much of a difference from the rest of the novel, making a good book end in a somewhat corny way which unfortunately takes away from the overall feel of the novel.

With that being said, I believe that anyone with the casual interest in the Wars of the Roses and how they had affected the chain of events that ultimately lead to a successful Tudor rule will find the newest Gregory novel to be an insightful read. And most of the current Philippa Gregory fans know ahead of time what they are getting with her novels, so I doubt they would be too disappointed with this one.

This review has been cross-posted at The Burton Review, where there is a giveaway for both of the current books in The Cousins' War series The Red Queen and the newly released paperback of The White Queen.
Other reviews of The Red Queen:
Historical-fiction.com
Medieval Woman
My Fluttering Heart
Historically Obsessed

Followers of HF Connection are welcome to enter for the two-book-giveaway at The Burton Review, as well as the giveaway for a brand new Hardcover of Philippa Gregory's The Red Queen offered here at HF Connection.

To enter:
Become a follower of HF Connection. Please comment on this post with your email address.