The RAVEN and the WOLF: Chronicle I - Blood Oath By Christopher Spellman 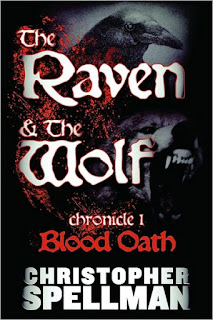 The Raven & the Wolf is an epic saga-like tale of dark-age conflict, oaths, brotherhood and betrayal, set in the throes of a divided and tumultuous 10th century Britain.


Bitter was that smoke across the span of night, the screams
competent to curdle blood, the blade-song pealing and unmelodious.

Thatch burned and crackled in flicking tongues of flame, sweeping  over narrowed lanes, one rooftop to the next and sending hot ash glowing and swirling into the night. Dogs barked, yowled and bayed. Women wailed and wept, cradling infants to their breasts surely as mothers must. The old cowered and shrunk back, dismayed. Men slow to their weapons died.

Peace had ended in that town.
Synopsis:
It is early in the 10th century. England has crowned a new king - Æthelstan the Faithful of Wessex - who has endeavored to unify all the realms of the isle under one rule.

But unity is not always won through bloodless means.

For Wulfric and Hereric, brothers of dubious descent who have fled their native kingdom of Northumbria under circumstances they shall not fully grasp for many years, the prospect of unity is as strained as that of England itself. Forced to endure a bloody, timeless pact, they are sworn as protectors of one another. But the gods and Norn-maidens of their pagan faith have another fate in store for the two kinsmen.
Their oath in jeopardy, the brothers embark upon diverging paths that by fate will force them to decide where their loyalties are strongest. As a coalition of discontented Scots, Britons and an opportunistic Viking kingdom in Ireland gather to challenge the authority of Wessex's overlordship, the paths they have chosen are destined to draw them into the upheaval that shall become England's greatest struggle.

The Norns are weaving the black threads of doom, ravens are circling low above fallowed fields and the gods are set to unchain the wolves from their dens.

The Raven & the Wolf is a tale of Dark Age betrayal, of kingdoms in conflict and the destiny that shall turn the fields of Britain into a sea of blood. This is the first book in a series of novels detailing the tumultuous relationship between kinsmen in Dark Age England.

Available now for Purchase At Amazon or B & N
Posted by BurtonReview at Wednesday, August 25, 2010

Email ThisBlogThis!Share to TwitterShare to FacebookShare to Pinterest
Labels: 2010 Releases