Guest Post--Robert Parry, Author of Virgin and the Crab (and review)

This is a cross post from The True Book Addict blog

AN ABSENCE OF EVIDENCE

With history there is something always to be kept in mind: that an absence of evidence does not necessarily always indicate evidence of absence. There is, for example, no evidence that in the middle of the 16th century a secret group of influential men and women, mostly Cambridge university scholars, would have helped the then princess Elizabeth withstand numerous attempts upon her life and to steer her safely through the most dangerous of her formative years to ultimately become Queen of England. But that does not mean that it could not have happened. And this is where the writer of fiction can step up and fill in the details. The writer of fiction, in other words can, provide some of that ‘absence of evidence’ in the form of a good yarn or two and get us all thinking of what might have been going on in-between all those dry facts and figures, all those dates and names of battles and so on that we learn in our history books. That is why we love it, of course.

My novel, ‘Virgin and the Crab,’ which Michelle has very kindly reviewed here, is just that kind of thing, an exercise in speculation. It’s not one of those ‘what-if’ stories, but rather one that fills in the gaps between real events. That’s how I like my historical fiction. And this is where we meet the hero of the story, a gentleman by the name of John Dee.

Recently, in 2009 there was a conference at Cambridge in England in which a number of eminent scholars and historians met over a period of two days to try to restore the somewhat tarnished reputation of one of England’s greatest minds, the 16th century astronomer, mathematician, geographer and antiquarian John Dee. Dee was born in 1527. He was at a very early age regarded as one of the leading intellectuals in Europe and even in his 20’s when lecturing at the Sorbonne, for example, it was said that people would clamber upon window sills outside the crowded lecture halls, to press their ears against the windows to hear what he had to say. He helped introduce Euclidean geometry to Europe; his library at his home in Mortlake became the most extensive in Europe, far greater than that of Oxford university, becoming a hub of excellence in all matters of learning, visited by everyone of note in England at the time; and he may even have had a hand in the invention of the telescope long before it first appeared in Holland and Italy and was subsequently adopted for use by Galileo in 1607. Dee advised on all of the great voyages of exploration undertaken by the Elizabethan seamen such as Drake, Raleigh, Gilbert and Frobisher. He advised on super novae, on comets, and he was an early advocate of the sun-centred view of the solar system as outlined by Copernicus.

More excitingly, however, Dee was also a secret agent - the original 007, in fact (he actually signed some of his more personal documents with a 007 symbol). During the turbulent decade following the death of Henry VIII – one of the most cruel and unsettling periods of English history when the nation managed to get through no less than five different monarchs (Henry VIII, Edward VI, Jane Grey, Mary I and finally Elizabeth), he was employed at Court and became tutor to the young King and also to Elizabeth’s life-long friend Robert Dudley. Dee was a close friend not only of Robert Dudley, but also a colleague of William Cecil, Elizabeth’s chief minister and closest of confidants. Those, at least, are the facts.

Now what about ‘Virgin and the Crab?’ Well, there is no hard evidence that John Dee knew Elizabeth during her childhood, or that he was her tutor. There is no evidence that he guided and protected her and kept her from harm’s way during her younger years - as my story suggests. There is no evidence that he was not devoted to the cause of the Reformation or to the English Renaissance with all the passion, romanticism and selfless dedication of a medieval knight - or that he put his own life on the line again and again to make it all happen. There is not a shred of evidence, in fact, that he ever believed for one minute that the brilliant young Elizabeth was destined in some magical sense to succeed to the throne or that she would ultimately take England forward into its most golden of all ages. But none of this is evidence of absence. It’s just where this article leaves off, and the story begins … 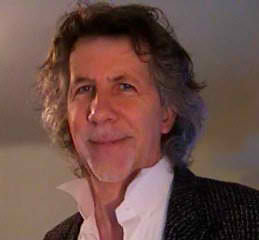 Author of the novel 'VIRGIN AND THE CRAB' Robert Parry is a UK-based writer with special interests in Tudor and Elizabethan history, Victorian Gothic and Pre-Raphaelite art. Also keen on astrology, cooking, good wine and gardening (though not always undertaken in that order).

He is the author of several successful works of non-fiction - some of which have been translated into foreign language editions. 'VIRGIN AND THE CRAB' is his debut novel.

Robert is hosting a "guess the title of his next novel" competition. Go to his blog (listed above) for details.

Virgin and the Crab: Sketches, Fables & Mysteries from the early life of John Dee and Elizabeth Tudor--Robert Parry

When I finished reading 'Virgin', I told Robert that it should be recognized by a major publisher. He responded by saying that most publishers will not touch a debut novel of over 100,000 words. 'Virgin' is close to 200,000. It's a shame because this book is one of the best historical novels I have ever read. There's no fluff in the pages of this book. Just straight historical fiction that read almost like non-fiction, but nowhere near as boring. Not that I generally think that non-fiction is boring, but some can be real yawners, if you know what I mean. What I enjoyed most about the book was that I was able to follow what was transpiring with Elizabeth directly parallel to what occurred from before Mary's (Elizabeth's sister) reign and then from the beginning until the end of Mary's reign. I enjoyed the intrigue that was involved in this plot to protect Elizabeth and to ensure that she would someday take the throne. There was a lot of breath holding on my part, even though I already knew the outcome. I liked the way Lady Jane Grey was portrayed here...more as a pawn then a willing participant in seizing the crown. Which made her end all the more tragic. Mary was not portrayed in a favorable light. She comes across as pias, petty and prudish and so full of hatred and the need for revenge for what happened to her mother that she takes religious fanaticism to a new extreme and many people die as a consequence. I'm on the fence about Mary. The character of John Dee was very interesting. I do not know much about him outside of this book, but after reading 'Virgin', I'm compelled to find out more. Perhaps the best thing about this book is that it portrays my favorite historical figure in the best possible light. Elizabeth was an enigma...a skillful and powerful ruler who chose to be married to her country instead of a man. How much of what we know is true? And what do we not know? Here in this favorite quote of mine from the book, Elizabeth speaks about the mystique that surrounds her (and John Dee):

Men say he has his darker side. And many, I know, go in fear of him. Like Us, a mystique has surrounded our friend, John Dee. It is good that this has occurred, and We shall keep it so. But really, in truth, he is a darling of a man - and no more a Crab than I might be a Virgin - though we'll say no more of that!

I highly recommend 'Virgin and the Crab' to all historical fiction lovers and especially to all who adore Elizabeth Tudor. It's an exciting twist on Elizabeth's path to the throne. Historically compelling and deliciously suspenseful! I'm looking forward to Robert's next novel.

The brilliant young mathematician and astronomer John Dee has one overwhelming obsession: liberty. Abandoned and humiliated, Elizabeth Tudor has one simple aim: survival. This is their story. Against the background of the English Reformation, and threatened by a vengeful and unforgiving Queen, the mysterious brotherhood of the Rose Lodge attempts to guide the nation towards enlightenment and stability. Here, the special alchemy of the Virgin and the Crab works its magic: growing from childhood friendship, through adolescent flirtation, to mutual respect and admiration as together they prepare to sacrifice everything for the world they wish to inherit.
Posted by Michelle Stockard Miller at Monday, September 20, 2010