Book Review: Elizabeth I: A Novel by Margaret George

Previously posted on The Burton Review: 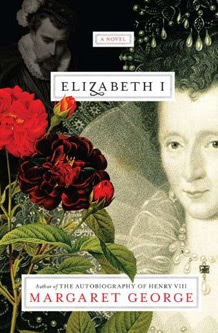 Margaret George is one of those iconic historical fiction authors that even if you have not read her books, you have heard of her. I have been collecting her books but have not been able to read them as they look so daunting in size. This year, fans are treated to another tome by Margaret George as she brings us a novel on Elizabeth I. This is not your ordinary Elizabeth I novel for two reasons: 1. It is written by Margaret George. 2. It begins in 1588, when Elizabeth is fifty-five and about to face the Spanish Armada.

I was ecstatic when I realized this was not another rehash of Elizabeth's life from Thomas Seymour's pats on her butt to her struggles during her sister's Mary's reign, though it does cover the rise and fall of the Earl of Essex in detail. I was then overly ecstatic when I realized that this novel also features Lettice Knollys, whom Elizabeth liked to call the she-wolf. My Enemy The Queen by Victoria Holt was one of my favorite Tudor reads and I loved Lettice as she tried to out-maneuver Elizabeth every chance she got. The rivalry was heightened when Lettice married Elizabeth's favorite, Robert Dudley the Earl of Leicester.

Elizabeth I: A Novel read very much like the Dickens' favorite A Christmas Carol. We see through the aged Elizabeth's eyes the ghosts of the past from her parents to her favorites who flit in and out of her consciousness; the present with the younger courtiers who no longer have anything of value to Elizabeth except their looks; the future of England because of course this Virgin Queen left no heir for England. The decisions of the past and the present and how they affect the future of England are also an underlying theme for Elizabeth as she struggles to maintain her hold on the country that she married for richer or for poorer. The Spanish Armada was always a threat, and even though she was able to defeat it in 1589, by the time Spain had rebuilt its forces to strike again, Elizabeth's most trusted advisors and the strongest fighters and nobles had withered away.

Elizabeth hated most of all Lettice Knollys, who had secretly married Elizabeth's perhaps one true love Robert Dudley. Lettice was like Elizabeth in many ways as far as stubbornness and force of will, but promiscuous Lettice lacked the self-control of the Virgin Queen. Lettice was also the mother of Elizabeth's next favorite after Robert Dudley, the Earl of Essex Robert Devereux. In and out of this story of Elizabeth we are treated to chapters devoted to Lettice, as she struggles in vain to regain all that she has lost since Robert Dudley's death. Her one shining hope remains with her son the Earl of Essex, as he hopes for favors from Elizabeth I to help sustain his family. Robert Devereux is headstrong and unruly, and both Lettice and Elizabeth had difficulty with restraining Robert's self-destruction, and this spiral of love and hate between the Queen and Essex became interwoven into the novel as a major theme.

There were many names and titles, and a few Roberts as Robert Cecil is also featured here. There were even surprising occurrences behind closed doors, including the famous Will Shakespeare. The cousins descended from the Boleyn family are a strong part as the old loyal favorites of Elizabeth who always stayed loyal. And yet there were always some who were tired of Elizabeth's Protestant ways as more religious strife occurred with both Catholics and Puritans. The crisis in Ireland and the years of crop failure are another focus as Elizabethans struggled to maintain the Golden Age. The wax and wane of Elizabeth's reign is well known to Tudor fans, but I have not read any novels that actually spotlight their entire work on the wane of Elizabeth's life such as Margaret George's does here. Names of courtiers are weaved in and out of the story like our own old friends, so that those readers familiar with the Tudor era will feel right at home without getting another monologue of the backstory of each person. It is only for that reason that newbies to the Elizabethan era may find themselves lost in the vague comings and goings of the important people of Elizabeth's time, but as a lover of Tudor fiction I appreciated it as the minute details are lightly touched upon as a refresher.

The first person point of view of Elizabeth (and intermittently Lettice) seemed spot on.. the face on the outside to her subjects being different than the thoughts swirling in her head; slightly sarcastic and witty in her aging years even though she seemed a bit shocked that she was as old as she was. The magnificence of this tome is the way that George encompasses the era, without leaving out the other minor and major players of the court. This novel is by far the most human look at Elizabeth that I've ever read as the author brings Elizabeth to grips with her legacy that includes her executed mother and her tyrant father. I especially loved the secret garden scene at Hever Castle.

This is a very detailed book and even though it is fiction I felt like I was being educated during the read. I loved this look at the last decade of Elizabeth's reign, and admired the amount of facts and the imagery that were blended throughout the story. This is the epitome of a well-researched book, and since it was enjoyed on so many levels it would be remiss if you did not include this latest Elizabeth I novel on your Tudor bookshelf. Elizabeth I: A Novel is an absolute must read for Elizabeth I fans, as this novel is a fitting tribute to the woman and Virgin Queen that seemed to outwit many of her enemies and always made sure she was above reproach. This one is certainly going on my Favorites of 2011 post.

Other pieces that I recommend that deal with the fall of Essex and his relationship with Elizabeth are Elizabeth & Essex: A Tragic History by Lytton Strachey and  The Private Lives of Elizabeth and Essex, a 1939 movie featuring Bette Davis. Also, I have yet to read The Walsingham Woman, by Jan Westcott, about Frances Walsingham married to Phillip Sidney first then the Earl of Essex. Frances is mentioned a lot in George's novel which is why I include Westcott's here. And as mentioned before, there is Victoria Holt's My Enemy the Queen which I loved.

I am also beyond excited to be able to see Margaret George speak for the Arts & Letters Lectures held at the Dallas Museum as part of her book tour for Elizabeth I. You can buy tickets via the museum if you want to hear her speak and get your book signed. I hope to see you there, or you can visit this link to see if she will be coming to a town near you!
Posted by BurtonReview at Wednesday, March 30, 2011