This review is a cross post from The True Book Addict blog.

The Raven Queen by Jules Watson
finished reading on March 11, 2011

Epic...this is the word I choose to describe Jules Watson's new novel.  Jules takes the legendary Irish queen, Maeve, and weaves a tale around her reminiscent of other legends like Beowulf or Queen Boudicca.  I was drawn to Maeve like no other.  I love strong female characters and stories built around them and this is definitely Maeve's story.  Maeve, and really all the characters, are so richly drawn, I almost felt part of the story.  And the magical side of Erin, the four kingdoms--the Sidhe (Shee), the fairy folk or Otherworld beings--is so intricate and mystical.  Not since The Mists of Avalon by Marion Zimmer Bradley have I been so entranced by this side of a story.  Set in 100 BC, the story tells us that strong female leaders have been around for a long time, perhaps since the dawn of time.  Maeve fights against insurmountable odds to take over a kingdom and rule as queen in what is most definitely a man's world.  And I cheered for her the entire time.  This is my first reading of a Jules Watson novel and I'm telling you, it will not be my last.  So please excuse me...I must go add all her books to my wish list.  You should do the same.
Book description (from goodreads):
She was born to be a pawn, used to secure her father’s royal hold on his land. She was forced to advance his will through marriage—her own desires always thwarted. But free-spirited Maeve will no longer endure the schemes of her latest husband, Conor, the cunning ruler of Ulster. And when her father’s death puts her homeland at the mercy of its greedy lords and Conor’s forces, Maeve knows she must at last come into her own power to save it.

With secret skill and daring, Maeve proves herself the equal of any warrior on the battlefield. With intelligence and stealth, she learns the strategies—and sacrifices—of ruling a kingdom through treacherous alliances. And to draw on the dangerous magic of her country’s oldest gods, Maeve seeks out the wandering druid Ruan, whose unexpected passion and strange connection to the worlds of spirit imperil everything Maeve thought true about herself—and put her at war with both her duty and her fate. 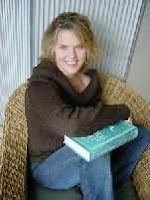 About the author (from goodreads):
Jules Watson was born in Australia to English parents. She came to fiction via archaeology and public relations, working most recently as a freelance writer in England. She and her Scottish husband divide their time between the United Kingdom and Australia.

To read more about Jules and her works, visit her website HERE

This book was sent to me for participation in a virtual book tour.  This review is my honest opinion and I was not monetarily compensated for providing it.
Posted by Michelle Stockard Miller at Tuesday, March 22, 2011