Have you heard of the scandalous Madame Bovary by Gustave Flaubert? His first published novel in 1850, and it was a pioneering one at that. And the scandal! The criticism of social classes, the affairs..Flaubert himself was hit with an immorality charge when Madame Bovary was serialized in a literary magazine.

I asked the author of the upcoming Madame Bovary's Daughter (just released!) to elaborate on a few key topics for her potential readers. Please welcome author Linda Urbach with her introduction to her newest novel, and a book giveaway, too!


Why I wrote Madame Bovary’s Daughter.
When I encountered the novel Madame Bovary for the first time in my early twenties I thought: how sad, how tragic. Poor, poor Emma Bovary. Her husband was a bore, she was desperately in love with another man (make that two men), and she craved another life; one that she could never afford (I perhaps saw a parallel to my own life here). Finally, tragically, she committed suicide. It took her almost a week of agony to die from the arsenic she’d ingested.

But twenty- five years later and as the mother of a very cherished daughter, I reread Madame Bovary. And now I had a different take altogether: What was this woman thinking? What kind of wife would repeatedly cheat on her hardworking husband and spend all her family’s money on a lavish wardrobe for herself and gifts for her man of the moment; most important of all, what kind of mother was she?

It was almost as if she (Berthe Bovary) came to me in the middle of the night and said, “please tell my story.” Having adopted my beautiful daughter at age 2/12 days I had a big soft spot in my heart for the orphan Berthe Bovary. I totally sympathized with her lack of mother love. Also, I remembered how much I loved Paris when I lived there. I had a strong desire to return-- which I was able to do in my head as I wrote the novel.

The research and writing process of Madame Bovary’s Daughter.

This is the first historical fiction I’ve ever written, so research played a big part. My first two novels were all about me but my life had gotten very boring which is why I turned to historical fiction. I used the Internet almost extensively. I found sites where I could walk through Parisian mansions of the times. Sites that not only showed what women wore but also gave instructions on how to create the gowns that were popular. I bought this great book, Mrs. Beeton’s Household Management which gives you details of absolutely everything you need to know about the running of a house in the 1850’s. You want to serve a 12-course dinner, she’ll tell you how. She’ll also tell you how many servants you need and how many pounds of paté you need to order.

The thing about research is you have to be careful not to let research get in the way of the writing. I tended to get so interested and involved in reading about the Victorian times and France in the 1850’s I would find the whole day had gone by and I hadn’t written a word. So the important thing for me is making sure I’ve got the story going forward. That’s the work part. The fun part is then filling in the historic details. It’s like I have to finish my dinner before I’ve earned my dessert. The other thing about research is that I learned to keep room open for a character I hadn’t thought about before. For example, I suddenly came across the famous couturier Charles Frederick Worth, an Englishman who went to Paris and revolutionized the fashion business. He jumped off the page at me and insisted on being part of my novel. So my advice to writers is always keep a place at the table of your book for an unexpected guest. 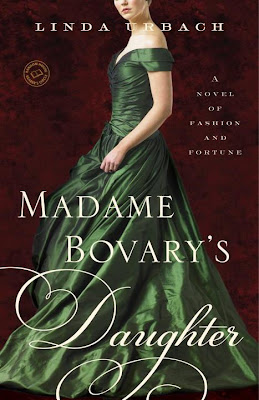 Summary of Madame Bovary’s Daughter
What you may remember about Madame Bovary is that she was disappointed in her marriage, shopped a great deal, drove her family into bankruptcy, was abandoned by two lovers, and finally took her own life. With all that drama, who even remembers she had a daughter?

And what ever happened to the only, lonely daughter of the scandalous Madame Bovary? Poor Berthe Bovary. She was neglected, unloved, orphaned and sold into servitude before the age of 13. It seems even Flaubert didn’t have much time for her. She was the most insignificant and ignored character in that great classic novel.

But in Madame Bovary’s Daughter we see how Berthe used the lessons she learned from her faithless, feckless, materialistic mother to overcome extreme adversity and yes, triumph in the end. As a young girl, Berthe becomes a model for famed artist Jean Francois Millet, later a friend to a young German named Levi Strauss and finally a business associate of Charles Frederick Worth, the world’s first courtier.

This is a Sex and the Cité tale of a beautiful woman who goes from rags to riches, from sackcloth to satin, from bed to business. Busy as she is, she still has time to wreak revenge on the one man who broke her mother’s heart. And, of course to have her own heart broken as well.

From her grandmother’s farm, to the cotton mills to the rich society of Paris, it is a constant struggle to not repeat her mother’s mistakes. She is determined not to end up “like mother, like daughter”. And yet she is in a lifelong search for the “mother love” she never had.

Berthe Bovary is a Victorian forerunner of the modern self-made woman.

Thanks so much to Linda Urbach for introducing us to her new novel! If this novel intrigues you as much as it does me, then sign up for the giveaway! The author is offering one lucky follower their own copy of Madame Bovary's Daughter, open to the USA. Please leave your email address in the comments as well. Ends August 6th.

(This post was reprinted with permission via Burton Book Review)
Posted by BurtonReview at Tuesday, July 26, 2011