{GIVEAWAY!!}} MURDERESS! A Guest Post from Rebecca Johns, author of THE COUNTESS

Please see the end of this post for details on the book giveaway of THE COUNTESS!

Courtesy of Crown Publishing Group: In January 1611, one of the highest-born members of the Hungarian nobility, Countess Erzsébet Báthory, was walled inside her castle tower and imprisoned for the rest of her life. Her crime—the brutal torture and murder of at least thirty-five women and girls, mostly servants in the countess’s employ. Nicknamed the “Blood Countess,” Báthory is the first and one of the most prolific female serial killers in history. While her story is horrific, her legend has nevertheless persisted in the popular imagination—inspiring a well-established cult following intrigued by her strange gothic legacy. The real-life countess was one of Bram Stoker’s two inspirations for Dracula, and her character has appeared in film, video games, and classic and contemporary literature. She was even referenced on a recent episode of True Blood.


The Countess: A Novel (Broadway Paperbacks, September 27, 2011) by Rebecca Johns: 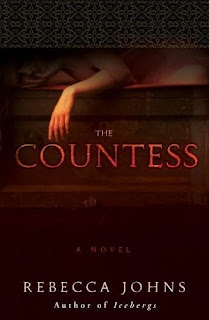 Please welcome the author, Rebecca Johns, as she tells us her following story:

In the dim, distant past, all the way back in the winter of 2008 when I first heard of the mass murderer named Elizabeth Báthory and decided to write her story in a new (dare I say “feminist”) perspective, I knew I was taking on perhaps the biggest challenge of my writing life. Even Edgar Allan Poe knew you couldn’t keep a reader in the mind of a psychopathic killer for 300 pages, which is why “The Tell-Tale Heart” is so short. And yet I couldn’t resist. Báthory’s story had everything I was hoping for in a first-person narrator: a cool, calculating mind; a sense of righteous indignation; a massive ego; an ability to lie, even to herself. The more research I did, the more I discovered that the elements of her story that are the most well-known to the public (the 600+ virgins she supposedly sacrificed to bathe in their blood to preserve her beauty) were myths perpetrated by Victorian-era men as a warning against female vanity. The story got better and better. Where was the real Báthory, I wondered, and could I breathe some life back into her story? Find the “psych” in “psychopath”?

Even when my editor urged me to turn the novel into a third-person book (which certainly would have been a lot easier on everyone, me especially) I just knew I had to let Báthory speak for herself. For the past hundred years men have been telling Báthory’s story from the outside looking in. How much more terrifying, for me and for the reader, perhaps, to be her for the duration of the book, to look into ourselves and ask what kind of a monster lives there, in each of us?

If you’re going to revisit a subject so familiar to the public, so reviled and yet so fascinating, you’d better have something new to say, or at least a new way of saying it. John Gardner knew it when he wrote Grendel. Jean Rhys knew it when she wrote Wide Sargasso Sea. Letting Báthory tell her own story, tell us what the world looks like from her tower, seemed to me (and still seems to me) the most dangerous way of approaching a familiar tale. What could be more interesting than that?


Thank you to Rebecca for visiting us! And now dear readers, do you think you could sympathize with the Countess? Do you want to read her story first?

Would you like to win a copy of THE COUNTESS? Please leave a comment with your email address, and you are entered!

THREE WINNERS!!
Plus one entry for each facebook and tweeted link to this post! Good Luck! Giveaway ends 10/22/11, open to USA only.
Posted by BurtonReview at Friday, October 07, 2011