Two Destinies...One Journey of Love
In a humble fishing village on the shores of the Nile lives Asenath, a
fisherman's daughter who has everything she could want. Until her
perfect world is shattered.
When a warring jungle tribe ransacks the village and kidnaps her,
separating her from her parents, she is forced to live as a slave. And
she begins a journey that will culminate in the meeting of a handsome
and kind steward named Joseph.
Like her, Joseph was taken away from his home, and it is in him that
Asenath comes to find solace…and love. But just as they are beginning
to form a bond, Joseph is betrayed by his master’s wife and thrown
into prison.
Is Asenath doomed to a lifetime of losing everything and everyone she loves? 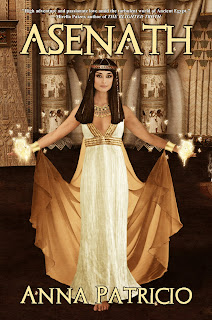 Please welcome the author of Asenath, Anna Patricio (See below for the International Book Giveaway details!):
On Asenath
by Anna Patricio

I have always been fascinated with the Biblical account of Joseph of the coat of many colours. It is an intriguing tale of strength and perseverance. Sometime ago, I realised that while much is known about him, hardly anything is known about the woman he married - Asenath. All we are told about her is that she was the daughter of a priest of On (also known as Heliopolis).  Curiosity drove me to research. The results were scant.
Possibly the most known story about her is the first century Greek text JOSEPH AND ASENATH, which is also in the Apocrypha (books that were left out of the Bible). Basically, this story centers on Asenath's conversion to Judaism. Asenath is a proud and beautiful woman who shuns all ideas of marriage and lives alone in a tower. One day though, she sees Joseph outside riding in his chariot, and immediately changes her mind about marriage. She asks her father to introduce them. Alas, Joseph refuses because she worships idols. She then locks herself in her room and weeps. An angel who looks like Joseph then appears to her and feeds her sacred honey. Asenath is then converted. When she meets Joseph again, he accepts her hand in marriage. Sometime after Joseph's brothers arrive in Egypt, Pharaoh's son notices Asenath and hatches a plan to get rid of Joseph. Benjamin, Joseph's youngest brother, comes to the defence of his noble relatives. The tale ends with the wayward royal son defeated and, if I am not mistaken, with Joseph as Pharaoh after the current king's death.

I might add, by the way, that my novel sort of pays homage to the Greek JOSEPH AND ASENATH. There is a scene with bees, inspired by the ancient tale.
Some tales have Asenath as Dinah's long-lost daughter. Dinah, as you may know, was Joseph's half-sister who was violated by the prince Shechem. Asenath was apparently born as a result of this, and the brothers got rid of her to hide Dinah's shame. In one Jewish folktale, the brothers abandon the baby in the desert.
An eagle gets the baby and deposits her at an altar in Heliopolis. There, the priest finds Asenath and adopts her as his own. Asenath, however, has evidence of her true lineage: a medallion bearing Hebrew inscriptions. Years later, after Joseph becomes vizier, he immediately recognises his niece because of the medallion. (I find it rather peculiar how Asenath becomes Joseph's niece, but this was still an interesting story.)

Yet other accounts have Asenath as the daughter of Potiphar, Joseph's master. The reasoning behind this is the striking similarity between  the names "Potiphar" and "Potiphera," the name given to Asenath's father in Genesis. There is one story in which the infant Asenath cries out Joseph's innocence after the latter is falsely accused by his master's wife. Asenath's reward later in life was marrying Joseph. Some contemporary fiction, by the way, makes use of this legend - Asenath being Potiphar's daughter. This didn't make it to my novel,
but I find it an interesting idea; it has a potential for a really riveting plotline.

Other than the abovementioned, I didn't find much on Asenath. Hence, I imagined what she might have been like: how she lived before she met Joseph, how she felt upon her marriage to him. I like to think that
just as Joseph was a strong person, so was Asenath. Hence, my novel ASENATH. 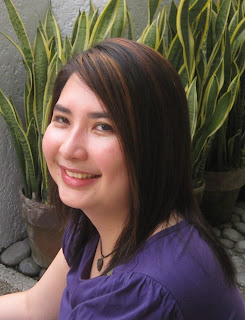 Anna Patricio is a lover of ancient history, with a particular interest in Egypt, Israel, Greece, and Rome. She is also intrigued by the Ancient Near East, though she has not delved too much into it but hopes to one day.


She undertook formal studies in Ancient History at Macquarie University. She focused mostly on Egyptology and Jewish-Christian Studies, alongside a couple of Greco-Roman units, and one on Archaeology. Though she knew there were very limited job openings for ancient history graduates, she pursued her degree anyway as it was something she had always been passionate about.
Then, about a year after her graduation, the idea to tackle historical fiction appeared in her head, and she began happily pounding away on her laptop. ASENATH is her first novel.
Recently, she traveled to Lower Egypt (specifically Cairo and the Sinai), Israel, and Jordan. She plans to return to Egypt soon, and see more of it. In the past, she has also been to Athens and Rome.


Anna is currently working on a second novel, which still takes place in Ancient Egypt, but hundreds of years after ASENATH.

GIVEAWAY!
If you would like to enter for your chance to win your own copy of Asenath, leave a comment on this post.
Open to all International followers of HF-Connection. Please leave your email address so we can contact the winner!