WINNERS of River in the Sea:

CONGRATS! I have sent you emails.  Please respond within 48 hours.  Thanks! 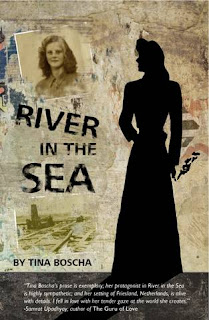 RIVER IN THE SEA
AVAILABLE ON AMAZON

Please welcome the author of River in the Sea, Tina Boscha:

I have bad news for my mom: readers want a sequel.

Of course, this isn’t bad news at all, for either her or me. But when your daughter writes a novel based on your life, as I did for my mother, it may be a bit surprising, even shocking, to think that readers want to know more. It took my mom a few months to crack the book open and read it. My dad had to read it first and let her know it was okay, and in the meantime I tried not to pressure her. Still, it was difficult for me until I put myself in her shoes. If my early life was shaped into fiction and displayed for all to read and see and perhaps judge, I’d be nervous too.

I originally set out to write River in the Sea as a stand-alone book, and my motivations to write it were many. There is the most selfish one, and that is because I have always, always wanted to write and publish. It was never enough for me to say, when asked what I wanted to be when I grew up, that I wanted to be a writer. I always said author. To me, even as young as six or seven, that was a crucial difference.

I also wanted to write my parents’ story, most notably my mother’s, as they grew up during the Nazi occupation of the Netherlands during WWII.  During my childhood, I silently collected the stories my mom and dad told my siblings and me about what they experienced as kids during the war. They talked of hiding out in hollowed out potato heaps, surprise raids where soldiers took everything from jewelry to milk, throwing their bikes into the canal to avoid giving them to German soldiers, downed pilots ferried out to England by the Frisian and Dutch resistance.

It was mind-boggling that these events were something my parents lived through, and in particular, my mother's father and brothers experienced events that most modern kids and adults just can't fathom. Openly defying the orders of the German army and going into hiding? It's amazing, dramatic, thrilling, and sobering. Studying World War II is one thing, knowing those who lived through it is another. (The actual research for the book was easy; I interviewed my parents and took notes of our conversations. If I ever had a question, another phone call or an email was all it took.)

Furthermore, I often think the domestic side of war gets overlooked, and I wanted to show it from the viewpoint of a 15-year-old girl. And not just any 15-year-old. My mom openly defied orders of her own, unspoken but ironclad rules about what girls must be like. She was not demure, quiet, and resigned to become what everyone else expected of her – which back then was a homemaker and mother. She did eventually become those things, but at 15, she smoked (publicly!), drove her father’s truck and tractors (illegally, I might add, beginning when she was just 12), and worked outside in the fields alongside her brothers. All the while wearing very bold red lipstick. Later, at age 19, she decided to forge a new path and immigrated by herself to America.

It took me a long time to understand the significance of that sentence I just wrote; River in the Sea focuses mostly on the events that transpired the last six months of the war. I wanted to end the book with a satisfying resolution to those events, but to leave what happens to Leen afterwards open, because after all, there is much more life after 19! (Hint: the book does not end with a “Reader, I married him” moment.) Today’s readers are too smart to accept pat endings, where everything ties neatly in a bow.

But what surprised me was that readers wanted to continue following Leen’s adventures. One of my early reviews said, “I was actually thinking I would love for the author to continue her mother’s story of her life in Amerika. Did I really just ask for a sequel. Yep! I guess I did.” I recently spoke at a book club and the wonderful women there said the same thing, even starting to chant, “Sequel! Sequel!”

My mom – who was actually born Leen De Graaf, as in the book – considers herself just a regular person. Normal. Nothing out of the ordinary. But anyone who has ever known her, or knows her history, speaks differently. While the Leen in the book is my version of her, and therefore fictionalized, I tried to capture my mom’s essential characteristics – of trepidation falling before courage, of willingness to flout convention, of taking on big responsibilities because that’s what you do. Of her humor and warmth and sometimes need to be impetuous.

I’ll be honest – the idea of writing a sequel is a bit mystifying. And scary. From a pure plot point of view, how do you top WWII? But yet I feel more and more compelled to consider it. Maybe not a full-length novel, maybe a novella…. Who knows? I don’t have to figure it out right now. I’m still trying to get this book off the ground and my mom is still getting used to the idea that a book with her face on the cover is out in the world!

Ultimately, though, no matter what happens next in my own saga of writing and publishing a book about my very much alive mom, I have come to understand that this reader reaction is perhaps the highest compliment I can receive as a writer. Readers love Leen and want to follow her journey. She is a character that sticks with you. And in turn, this becomes the compliment I wish to pay to my mother:

Leen De Graaf, it really isn’t bad news, not bad news at all, to learn that you are anything but ordinary.

About the book:
"At fifteen, Leen De Graaf likes everything she shouldn't: smoking cigarettes, wearing red lipstick, driving illegally, and working in the fields. It seems the only thing she shares with her fellow Dutchmen is a fear of the German soldiers stationed nearby and a frantic wish for the war to end. When a soldier's dog runs in front of Leen's truck, her split-second reaction sets off a storm of events that pitches her family against the German forces when they are most desperate - and fierce. Leen tries to hold her family together, but despite her efforts, bit by bit everything falls apart, and just when Leen experiences a horrific loss, she must make a decision that could forever brand her a traitor, yet finally allow her to live as her heart desires. Inspired by the life of the author's mother, River in the Sea is a powerful and moving account of one girl reaching adulthood when everything she believes about family, friendship, and loyalty is questioned by war."


We would like to thank the author for offering a two copy giveaway of River in the Sea.  Up for grabs for two lucky followers of HF-Connection are a print copy (US/Canada) and an eBook copy (International)!