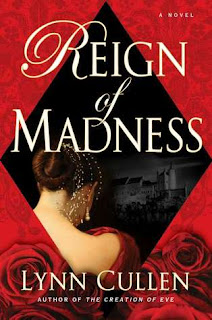 Burton Book Review posted the review of Lynn Cullen's novel last year, and now it is time to celebrate the paperback release! (Review)

Please welcome Lynn Cullen, as she answers few key questions we asked after reading the novel:

Thank you for inviting me to write a guest post for your blog. I’m thrilled to celebrate the paperback publication of REIGN OF MADNESS with you! I loved your questions, so I will just answer them directly.


What are the challenges of writing about a time period in which you has never lived?

In truth, I am so geared toward weaving my fiction around history that I would find it a challenge to write a novel set in contemporary times. To me, it’s a fantastically fun game to dive into the past to examine the life and world of a famous person maligned by history, like Juana the Mad in REIGN OF MADNESS. My sport is to tease out from legend what is truth and what is “bunk,” to use my dad’s term. (A nod here to my father, who took his seven children on a historical tour of the United States every summer while I was growing up, cultivating my taste for history from a very young age.) In the course of writing two novels and now working on the third, I have been amazed by how far our perceptions of famous people can stray from the truth.

My challenge, then, is to build a case for how I think the famous people in my books should be perceived. To that end, I have to know all I possibly can, not only about my characters, but about their culture and customs as well. For a history nut, this part of writing is pure joy. I love to travel to the places where my books are set. In the case of Reign of Madness, I’ve been to every scene in the book.

﻿
What did you discover regarding the legend of Juana's Madness and how it may have evolved over the centuries?

The legend of Juana the Mad in a nutshell, as it’s told in Spain now: The Spanish queen Juana, daughter of Isabella and Fernando, the monarchs who sent Columbus on his voyages of discovery, fell so in love with her husband that she went mad. Her husband, a man so beautiful that he was called Philip the Handsome, had proved to be unfaithful, driving Juana insane with jealousy. She could only posses him in death, when she traveled the countryside at night, opening this coffin to make sure that he was still hers. She was finally captured and locked in a palace for 46 years, and her father and then her son, ruled in her place.

I’m in the camp of historian Bethany Aram, whose biography of Juana, JUANA THE MAD, suggests that this legend was actually begun by Philip himself. For the first few years of his marriage to Juana—before she had children—all was mostly well. He found her so attractive that he insisted on marrying her the moment he saw her so he could take her to bed! But once she made the “mistake” of bearing a daughter instead of a son, his eye strayed, never to completely return.

When, by a fluke of history, Juana stood a chance of inheriting the Spanish crowns, and Philip wasn’t eligible to rule as king unless Juana was proven incapable of ruling, his wheels started turning. How could he prove that she was unable to rule? He remembered how she objected to his philandering—bingo! He started to portray her as going raving mad out of jealousy.

It was her word against his word, and he had the advantage. Juana was living in his country, the Habsburg Netherlands, modern-day Belgium. He had removed all her Spanish supporters from court—not a hard task since most of them had fled in the first years there, appalled by his court’s hedonistic ways. All he had to do was circulate stories that made her look unstable, and his sympathizers, who stood to gain if he ruled, backed him up.

His machinations worked. But he hardly got to enjoy the fruits of his diabolical labor. Legend has it that he was poisoned. I incorporated that particular bit of lore into my book. I found no proof that he wasn’t poisoned, so bring on the tainted cup!
Has Juana always been vilified in her home country or does she have still have supporters who do not believe she was ever mad?

For centuries, the story stood that Juana was mad. While the descendents who stole her crowns were ruling, it was critical that the story should stick. It became an accepted part of history in most parts of Spain.

But Juana has always had supporters. A group of them from the Segovia area tried to free her from the palace in which she was imprisoned. Her son Charles rounded them up and had them hung as a warning as to what would befall those who didn’t support the legend of Juana la Loca.

Today, in a busy plaza in Segovia, stands a statue dedicated to the men who tried to free their rightful queen. You will find her supporters there still.

She is beloved and respected, as well, in the town in which she was imprisoned, Tordesillas. Three years ago I attended an exhibition there celebrating her life. It was well understood at the exhibit that Juana was maligned so that her husband, then father, then son, could rule in her stead.
But the best way of summing up the love the people of Tordesillas have for Juana was by Carlos Adeva, an artist whose work centers around the 16th century queen. As I visited with him in his shop on the plaza mayor, I asked him how he would describe her. He grinned then cocked his arm to show his muscles. Fuerte, he said. Strong.

*** Enter to win a copy of Lynn Cullen's Reign of Madness***
Leave a comment with your email address
Extra entries to those who share via facebook and twitter
Open to followers of HF-Connection, USA only.
GIVEAWAY CLOSED, CONGRATS TO HEATHER! THANKS FOR SHARING THE POST!

Purchase at Amazon or IndieBound
Posted by BurtonReview at Saturday, May 05, 2012