Guest Post: Robert Parry, author of Virgin and the Crab

Welcoming author Robert Parry today in honor of the 3rd Birthday of his debut novel, Virgin and the Crab! 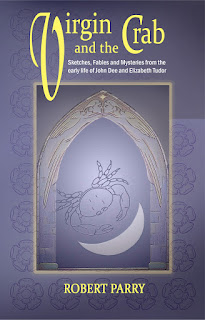 Once upon a time, in the days before the interenet and the advent of so much of the passionate discussion that we now encounter online, the work of the writer of historical fiction was relatively easy. One simply got hold of a biography or two, looked up a few facts and figures, dates and places, and hey-presto! The author could then just let his or her imagination run riot and delight everyone with yet another story about their chosen heroes, all those kings and queens of bygone days and all their legendary exploits!

Now, however, it is all so different. Now every possible item of information about every prominent historical figure is scrutinised and picked to pieces by whole armies of avid enthusiasts. Do you think you know where Queen Elizabeth was located on such and such a date, who she was with, or even what she might have been eating for dinner? It’s all out there … somewhere. And it changes quite often, too. So if you are not content with one version of events, you can always find an alternative point of view, supported by this or that document or state paper or erudite thesis from prominent scholars or TV personalities who all insist they have the right answer. There also seems to be a clear trend - away from information written down by people who actually lived at the time (unreliable – what did they know, anyway!) towards the discovery of more and more unromantic counter-assertions that seek to ‘put the record straight’ or ‘explode the myths.’ There are even a number of historians who have become novelists themselves! The whole genre has moved up a notch. Or has it?

The question is, should writers of historical fiction now be quaking in their boots at the prospect of any new venture they plan? Should they pepper their pages with footnotes and provide appendices explaining why they chose to write what they did, and the sources they used – a little apologetic perhaps just in case they might have drifted too far into the realms of speculation or untruth? Should they? No, of course not. That’s why, whenever I sit at my desk and reach for the keyboard, I console myself with the recollection that literature, be it good bad or indifferent, is a branch of the arts. And whenever the day comes when artists begin to worry about what they write or whether it conforms to some external standard of conduct, or version of ‘truth’ as perceived at the time, then it probably ceases to be art at all - and then we are all in big trouble.

Well, all this might sound terribly irresponsible, and anarchic, and there are certainly many people who would disagree. But my assertion is this: it is every bit as interesting for writers and readers of historical fiction to speculate on what their characters might have been thinking about, dreaming about and imagining for themselves, as it is to describe what they actually did. This approach provides us with a number of possible insights into the past, insights that can reveal how the world we live in today might have been formed and, ultimately, why we are who we are, and why we think the way we do. And that, I believe, is important. Thanks to Michelle for her continued support of this novel and for hosting this article here today. ‘Virgin and the Crab’ is named after the astrological signs of the two main characters: Virgo (the Virgin) for Elizabeth Tudor, and Cancer (the Crab) for her illustrious mentor John Dee. It is set in a period of twelve short years (1547 to 1559) in which England saw no less than two kings and three queens upon the throne in rapid succession. As you can imagine, there certainly was a lot of research needed in the making of it. But it’s not a history book, and the sub-title should serve as a suitable health warning: ‘Sketches Fables and Mysteries from the Early Life of John Dee and Elizabeth Tudor.’ In other words it is all rather theatrical; dramatic and full of fantasy, dreams and speculation.

To celebrate it’s 3rd Birthday there is a giveaway contest taking place over at The True Book Addict. Good luck, if you enter.

My website is on: http://robertparry.wordpress.com
And looking forward, perhaps, to meeting you on my Facebook page, too, sometime: https://www.facebook.com/RobertParry.author
Posted by Michelle Stockard Miller at Wednesday, April 25, 2012