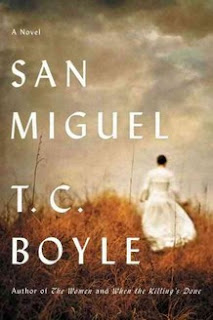 From the New York Times bestselling author of The Women, a historical novel about three women’s lives on a California island.


On a tiny, desolate, windswept island off the coast of Southern California, two families, one in the 1880s and one in the 1930s, come to start new lives and pursue dreams of self-reliance and freedom. Their extraordinary stories, full of struggle and hope, are the subject of T. C. Boyle’s haunting new novel.

Thirty-eight-year-old Marantha Waters arrives on San Miguel on New Year’s Day 1888 to restore her failing health. Joined by her husband, a stubborn, driven Civil War veteran who will take over the operation of the sheep ranch on the island, Marantha strives to persevere in the face of the hardships, some anticipated and some not, of living in such brutal isolation. Two years later their adopted teenage daughter, Edith, an aspiring actress, will exploit every opportunity to escape the captivity her father has imposed on her. Time closes in on them all and as the new century approaches, the ranch stands untenanted. And then in March 1930, Elise Lester, a librarian from New York City, settles on San Miguel with her husband, Herbie, a World War I veteran full of manic energy. As the years go on they find a measure of fulfillment and serenity; Elise gives birth to two daughters, and the family even achieves a celebrity of sorts. But will the peace and beauty of the island see them through the impending war as it had seen them through the Depression?

Rendered in Boyle’s accomplished, assured voice, with great period detail and utterly memorable characters, this is a moving and dramatic work from one of America’s most talented and inventive storytellers.


San Miguel, a windswept, miserable, lonely island in the middle of nowhere, shapes the lives of three very different women in this beautiful example of Historical Literary fiction. This is not a romance and not a particularly plot-driven story, and while some traditional fiction readers may find this more of a meandering read, the bleak canvas of San Miguel is painted with a vivid depth of colour.

We know from the first chapter that our first storyteller, Marantha, isn’t going to make it. She is dying of consumption, living a painful, guilt-ridden existence which her husband believes will be improved by moving their family to the fresh air of San Miguel. She’s become a bitter, pinched creature, but TC Boyle dives into her twisted heart and finds the yearning she tries so hard to kill.

On the island, Marantha’s life worsens tenfold, and yet she finds in herself a resolve she’s never known before. Her daughter, Edith, will do anything to escape San Miguel. She watches her mother die, watches their lives fall apart, and refuses to allow her life to be squeezed into the same constraints. Her romantic ature takes her into the arms of an awkward boy who will never know more than San Miguel’s harsh shore, and her impulsive nature leaves him behind to dream about her.

Fifty years later, Elise (unrelated to the other two women) moves to San Miguel with her husband, Lester, who loses his mind during their time spent on the island. She does all she can to maintain a normal, roductive life, even bringing their family somewhat of a celebrity status when she shares their unconventional education of the couple’s two daughters. Lester’s insanity is fed by a burning need to feel useful, which he is not. When WWII approaches, his desperation drives him to a terrible end.

TC Boyle’s prose is simply beautiful. His characters are powerfully honest and the settings are drawn with such impeccable detail it is impossible not to get sucked into all three stories. The reader is placed, whether they want it or not, on the lonely island of San Miguel. I, for one, both loved and hated the island, both pitied and raged at the characters. Boyle’s gift is reaching so deep into the reader’s mind and heart that it’s impossible not to be affected.

Reviewer Genevieve Graham started writing when she was in her forties, inspired by the work of the legendary Diana Gabaldon. Her first two novels, “Under the Same Sky” and  “Sound of the Heart” were published by Berkley Sensation/Penguin US in 2012 and have met with enthusiastic reviews. The third in the series, “Out of the Shadows” will be released Aug/Sept 2013. Genevieve writes what she calls “Historical Fiction” rather than “Historical Romance,” meaning she concentrates on the stories and adventures, and she doesn’t turn away from the ugly truths of the times. Romance binds her stories together, but it is not the primary focus. Genevieve also runs her own Editing business and has helped dozens of authors with their novels.

Posted by BurtonReview at Tuesday, September 25, 2012