Richard III: Portrait of a king, by Anne Easter Smith 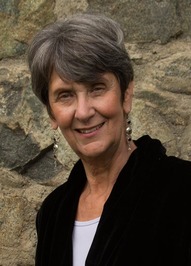 
From the author of A Rose for the Crown and Daughter of York comes another engrossing historical novel of the York family in the Wars of the Roses, telling the fascinating story of the rise and fall of the final and favorite mistress of Edward IV.


Jane Lambert, the quick-witted and alluring daughter of a silk merchant, is twenty-two and still unmarried. When Jane’s father finally finds her a match, she’s married off to the dull, older silk merchant William Shore—but her heart belongs to another. Marriage doesn’t stop Jane Shore from flirtation, however, and when the king’s chamberlain and friend, Will Hastings, comes to her husband’s shop, Will knows his King will find her irresistible.


Edward IV has everything: power, majestic bearing, superior military leadership, a sensual nature, and charisma. And with Jane as his mistress, he also finds true happiness. But when his hedonistic tendencies get in the way of being the strong leader England needs, his life, as well as that of Jane Shore and Will Hastings, hang in the balance. This dramatic tale has been an inspiration to poets and playwrights for 500 years, and told through the unique perspective of a woman plucked from obscurity and thrust into a life of notoriety, Royal Mistress is sure to enthrall today’s historical fiction lovers as well.

About the Author
Anne Easter Smith is an award-winning historical novelist whose research and writing concentrates on England in the 15th century. Meticulous historical research, rich period detail, and compelling female protagonists combine to provide the reader with a sweeping portrait of England in the time of the Wars of the Roses. Her critically acclaimed first book, A Rose for the Crown, debuted in 2006, and her third, The King’s Grace, was the recipient of a Romantic Times Review Best Biography award in 2009. A Queen by Right has been nominated by Romantic TImes Review for the Best Historical Fiction award, 2011. 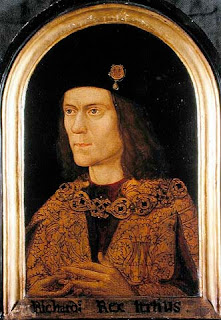 Portrait of a king by Anne Easter Smith

Thanks for hosting me today!

So now we know! It was Richard III under the car park in Leicester, and the exciting announcement on February 4th made me cry. Now all of us who are Richard fans will have somewhere to go and pay our respects. It appears Leicester has won out in the re-interment battle between there and York Minster. A ceremony is being planned for early 2014, I understand.

Many of you may have seen pictures or videos already of the amazing and wonderful reconstruction of Richard’s face from his skull found in Leicester. I can’t tell you how powerful that was for me to see! You must agree with me, this is not the face of a murderous, evil tyrant. Sure, we have several portraits of him, but none of them is actually from his time. They are copies--estimated to have been done anytime during the 50 years following his death in 1485.

So if we have reproductions of actual paintings to look at, why was the facial reconstruction such a delightful surprise? Because we know the portraits were altered to fit the descriptions the Tudor historians had written about King Richard. 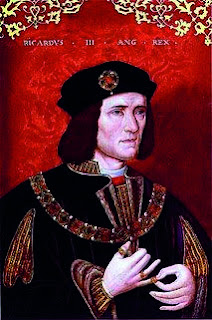 John Rous, who was writing during Richard’s time but quickly latched on to Henry VII’s coattails wrote that Richard had been in his mother’s womb for two years and emerged with a mouth full of teeth and a headful of long hair. Really! And they bought it? Well, if they bought that, then of course they would buy all the other nasty slanders slung at Richard. That he had a withered arm, that he murdered people and that he poisoned his wife in order to marry his niece. Jezum! What a load of codswallop (as we say in England).

There are several portraits of Richard that would have been done during his two-year reign when he was 30-32. If you go to this link you can hear an expert talk about how x-rays revealed the portrait in the Royal Collection was tampered with to create a haggard, older and bad-tempered face, added inches to the right shoulder, and turned the fingers into claws. Now the 16th century public had a portrait they could believe depicted the tyrant usurper Richard III!

However, if you look at the one belonging to the Societies of Antiquities in London, you will notice there is no discrepancy in the shoulder heights, his hands are elegant, and he looks more like a man of 30.

Of them all, I’ll take the reconstruction! Nicolas von Poppelau, a German visitor at Richard’s court in 1484, wrote in his journal that Richard was: “...three fingers taller than myself...also much more lean; he had delicate arms and legs, also a great heart...” No mention of a hunchback!

And Archibald Whitelaw, a Scottish Archdeacon, wrote: “Now I look for the first time upon your face, it is the contenance worthy of the highest power and kingliness, illuminated by moral and heroic virtue...never before has nature dared to encase in a smaller body such spirit and strength.”

The experts decided that even though Richard’s skeleton straightened measured 5 ft. 8 in., his scoliosis would have caused him to appear smaller. Scoliosis is quite common--in fact Usain Bolt has it--and Richard must have made up for his lack of inches with muscle and strength to have been able to wield those huge battle-axes and handle a destrier at the same time. 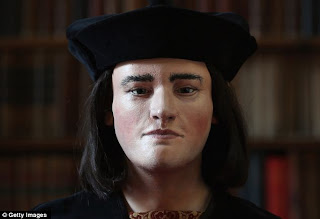 If a picture tells a thousand words--even if it’s computer-generated--then I’d say Richard was not evil-looking, but pretty handsome!

Check out the video of the facial reconstruction HERE.