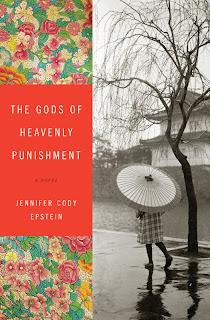 Please welcome Jennifer Cody Epstein as part of her virtual tour while promoting her novel, The Gods of Heavenly Punishment.


On Fiction and Fashion

As a writer, I seem to be drawn to very dark themes. My first novel, The Painter from Shanghai, was about Chinese artist Pan Yuliang's journey from prostitution to Post Impressionism, and it included several very tough phases/scenes. My second novel, The Gods of Heavenly Punishment, is even darker--it studies the 1945 firebombing of Tokyo (100,000 Japanese civilians incinerated by American napalm-packed bombs in under four hours) from both sides of the conflict. It covers cruelty by Japanese soldiers to both their occupied peoples and their own kind, as well as infidelity and moral betrayal. Obviously, there are happy moments in both novels. They both feature redemption of the human spirit and the power of the human soul as key themes. And they both center around heroines who fight for the right to define—and ultimately succeed in defining--their own destinies.

The less-happy stuff that those heroines had to go through, though, was still pretty heavy; both to research, and to try to process onto paper. In fact, one question I often get from readers and interviewers is how I got myself through those few grim and dark scenes. It’s a fair question, I think. There were certainly moments (after, say, describing Tokyo’s eerie, smoking silence the morning after the attack) where I asked myself the same thing: How on earth am I going to get through this? Up until now, at least, I’ve given a fairly standard response: I grounded myself in the happy, healthy moments of my life. I went running with my dog, and watched old movies with my daughters, and drank good wine and ate good food with my husband and friends. I did a lot of yoga. I meditated. I got massages and acupuncture: all true.

There is one thing I also did, though, about which I haven’t always been as forthcoming. And here it is:

It’s embarrassing, and yet I can’t in good conscience deny it: my writing fueled a surprising consumer habit. Every chapter or so---or after a particularly tough scene, or (sometimes) before a scene I knew would be difficult—I would allow myself to go on line and cruise around for up to an hour, filling e-carts to my heart’s delight. And it wasn’t with useful things like household linens or duct tape or toilet paper. I shopped for fashion—for really interesting, unique, of-the-moment clothes, shoes and accessories. I was never quite sure why I was doing it. But for some reason, foraging through cybermalls in search of the perfect cuff bracelet or pair of platforms got me through some of the bleakest writing stints of my life. What’s more, after a while I started to realize that simply learning about the newest jeans or the best dress deals or the most environmentally-friendly handbags wasn’t enough: as was the case with the “real” research I was doing about the Pacific War, I felt compelled to write about what I was discovering. And so, about three years ago—and about a hundred pages into my second novel—I launched a fashion blog. I did it anonymously, and kept it tongue-in-cheek and witty, with each post ending with a literary reference or featuring an interview with a fellow writer or designer. But the fact that I did it at all caused some people to shake their heads: why? Why would a supposedly smart, literary woman express an interest in—much less write about—something as frivolous as fashion?

It’s a question I asked myself repeatedly as I wrote my columns (on asymmetrical hemlines and heelless high-heels and one-shouldered tops) between and around scenes about fire and death: Why am I interested in this stuff? Granted, I’d always liked clothes. One of my earliest memories is of getting a new pair of Mary Janes as a toddler and loving them so much that I wore them to bed. Growing up, though, I’d essentially embraced the shapeless, neutral-hued, flat-soled and largely-linen styles of New England, and wore them well into my early thirties. But when I came to New York, something in my fashion outlook changed. I think it related to the innovation I saw in the outfits I saw being strutted down city streets; the way so many people here put together their daily ensembles with such obvious thought and care. They looked—good. And it looked like fun. At some point, it even occurred to me that the putting-together of such statements was not unlike the putting-together of—well, statements. Or sentences. Like the ones I put together every day on my computer screen. In other words, it occurred to me that fashion was perhaps just another form of expression—one with its own lyricism and logic and balance. And what better place to study it than here in NYC—the second fashion capital of the world?

And so I did: as I studied James Doolittle’s breathtakingly heroic mission to avenge Pearl Harbor, and pondered Curtis LeMay’s plans to level scores of Japanese cities, and the painstaking process of rebuilding a decimated Tokyo out of its own ashes, I also studied ….shoes. What was it about heels (which I hadn’t worn since high school) that made them worth the pain? And jewelry: how much jewelry was too much? Is Coco Chanel’s famous dictum (accessorize, then take one accessory off before you leave the house) really valid? And tonality: do shoes and bag always have to match? What about toenails and fingernails? Are black and navy ever acceptable together? The weird thing is that this bizarre balance somehow worked: I got through the toughest sections in my novel without feeling overwhelmingly crushed by the injustice of the world. My novel was published in mid-March. And—while I certainly didn’t buy everything I put in those cyber-carts, I still ended up with a decent closetfull of clothes I’m still enjoying. And I even learned to walk in 4” platforms.

The other weird thing, though, is that once my sporadically-dark novel was done I seemed to lose the urge to write about the light stuff. I retired my blog last Spring, around the time I was finishing up the final drafts of The Gods of Heavenly Punishment. It seemed I’d simply run out of haute steam. In the months since, while I’ve still indulged in the occasional cybershop, I don’t find myself quite as mesmerized as I always did when I had more pressing things to research. Which, I suppose, is just further proof to me that the two elements—the dark stuff of my novels, the light stuff of my closet--were somehow part of the same mysterious process for me.

That’s not to say the fashion-blog bug won’t bite again. I’ve just started researching my third novel, which will also be set against a war, and hence is also likely to have some dark moments. And around the same time, I suddenly found myself obsessed with easy, breezy summer dresses. Nothing too flashy—just well-cut, light and made from something other than polyester. And maybe with a subtle high-low hem job to boot. In fact, over the course of writing this post I took a break to peruse Piperlime’s bi-yearly tag sale, and found a few interesting candidates.

A lush, exquisitely rendered meditation on war, The Gods of Heavenly Punishment tells the story of several families, American and Japanese, their loves and infidelities, their dreams and losses, and how they are all connected by one of the most devastating acts of war in human history.

Fifteen-year-old Yoshi Kobayashi, child of Japan’s New Empire, daughter of an ardent expansionist and a mother with a haunting past, is on her way home on a March night when American bombers shower her city with napalm—an attack that leaves one hundred thousand dead within hours and half the city in ashen ruins. In the days that follow, Yoshi’s old life will blur beyond recognition, leading her to a new world marked by destruction and shaped by those considered the enemy: Cam, a downed bomber pilot taken prisoner by the Imperial Japanese Army; Anton, a gifted architect who helped modernize Tokyo’s prewar skyline but is now charged with destroying it; and Billy, an Occupation soldier who arrives in the blackened city with a dark secret of his own. Directly or indirectly, each will shape Yoshi’s journey as she seeks safety, love, and redemption.

Praise for The Gods of Heavenly Punishment
“…The book reveals itself to be as miraculously constructed as Frank Lloyd Wright's Imperial Hotel in Tokyo (which itself is a character). The Gods of Heavenly Punishment is a page-turner thanks to its high-stakes adventure, torrid love affairs and characters so real they seem to follow you around. And in the end, this gripping novel asks us not just to consider a lost chapter of a famous war but also to explore what it means to be lucky—and what it means to be loved. (Amy Shearn, O magazine)

"With stunning clarity, Epstein has re-created Tokyo both before and after the bombing in a novel that raises still-unanswered questions about the horrors of war, the cruelty associated with it and the lasting impression it can make on a person, a people or a place." (Shelf-Awareness.com)

“An epic novel about a young Japanese girl during World War II underscores the far-reaching impact that the decisions of others can have.” (Kirkus Reviews)

"Epstein’s second novel (after The Painter from Shanghai) is bursting with characters and locales. Yet painful, authentic (Epstein has lived and worked in Asia), and exquisite portraits emerge of the personal impact of national conflicts—and how sometimes those conflicts can be bridged by human connections." (Publishers Weekly)

“Sweeping….[A] harrowing novel of destruction and creation that will appeal to fans of historical fiction” (Library Journal—starred review)

About the Author
Jennifer Cody Epstein is the author of The Gods of Heavenly Punishment and the international bestseller The Painter from Shanghai. She has written for The Wall Street Journal, The Asian Wall Street Journal, Self, Mademoiselle and NBC, and has worked in Hong Kong, Japan and Bangkok, Thailand. She lives in Brooklyn, NY with her husband, two daughters and especially needy Springer Spaniel.

Visit the other tours for more reviews and giveaways-- HFVBT TOUR SCHEDULE
Posted by Michelle Stockard Miller at Thursday, June 27, 2013