Author Gillian Bagwell: Guest Post/Giveaway | A Willow, Not an Oak: Bess of Hardwick and Religion

In honor of Gillian Bagwell's newest release, she has written this article in response to my review of A Venus in Winter on Burton Book Review. See the end of the post for a giveaway courtesy of her publisher!

A Willow, Not an Oak: Bess of Hardwick and Religion
Bess of Hardwick, the subject of my novel Venus in Winter, lived through the most tumultuous religious period in England’s history.

England was unquestioningly Catholic through the first quarter of the 1500s. In 1521, the pope bestowed on King Henry VIII the title of Defender of the Faith, for defending the Catholic church from Martin Luther’s accusations of heresy. But in 1529, the pope refused to annul Henry’s marriage to Katherine of Aragon. Henry, desperate to marry Anne Boleyn, who he thought would give him the son he needed to succeed him, began to move away from the pope’s authority. In November, 1534, he instituted the First Act of Supremacy, making him head of the church in England. It became treason to refuse to recognize his supremacy, and many people, including his friend Sir Thomas More, were executed for refusing to acknowledge that the king was above the pope. Henry abolished the many religious orders, taking over the properties of abbeys and priories, looting their vast riches, and casting out thousands of nuns, monks, and friars to beg or starve.

In 1547, Henry died and was succeeded by his nine-year old son Edward, who with his regents went much further than Henry in reforming the church, abolishing clerical celibacy, the mass, and other Catholic forms of worship that had remained. Only a few years after William Tyndale was burned at the stake for translating the Bible into English, it was decreed that every church in England must have a copy of an English Bible. In 1549, Edward VI introduced the Book of Common Prayer, with prayers and forms of service in English that are still used today.

But when Edward died in 1553 at the age of fifteen, he was succeeded by his sister Mary, the daughter of Katherine of Aragon. Mary was unbendingly Catholic. She had seen her mother cast off so that Henry could marry Anne Boleyn, and had been declared a bastard and removed from the succession. She immediately reinstituted Catholicism as the religion of England, and what had been the law of the land under Henry and Edward was now heresy. She launched a brutal campaign of persecution of Protestants, sending almost three hundred people to burn at the stake in Smithfield between 1555 and her death in 1558, earning the nickname Bloody Mary.

After Mary, Elizabeth, the daughter of Anne Boleyn, became queen. She once more returned England to Protestantism, and now it was the Catholics who were in danger of losing their lives. The hatred and fear of Catholicism remained so strong that a hundred and thirty years later, James II was removed from the throne for being Catholic, and replaced with his daughter Mary and her husband William of Orange.

How did people live through these terrifying years of the sixteenth century? Some didn’t; they held to their beliefs though it cost them their lives. But most people must have preferred to accommodate themselves to the official religion, at least outwardly. Bess of Hardwick certainly seems to have done so. She found favor under Protestant Edward VI, Catholic Mary I, and Protestant Elizabeth I. Elizabeth was godmother to Bess’s first son, Henry, and Mary was godmother to Bess’s son Charles. Amazingly, Charles’s godfather was Henry Grey, father of Jane Grey, who was in prison and who Mary would shortly have executed.
Bess was not alone in surviving the many reversals in policy. Her friend William Paulet, Earl of Winchester, was treasurer under Henry VIII and all three of his children, and professed five changes in religion. When asked how he had survived, he replied that he was made of willow rather than oak, and bent with the wind.

Gillian Bagwell’s third historical novel, Venus in Winter, based on the first forty years of the life of Bess of Hardwick, will be released on July 2. RT’s four-star review called the novel “An engrossing look at a powerful woman in English history” and raved, “with the book’s rich descriptions, readers will feel as if they are right there among the pomp and circumstance of 1500s England, as Bess finds herself thrust into the glamorous, yet treacherous, court life of King Henry VII. As Bess navigates her rise through society and secures her place in history, Venus in Winter becomes a worthy epic novel.” For more about Gillian’s books, please visit her website, http://www.gillianbagwell.com. 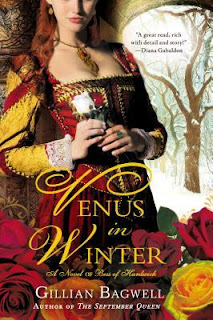 The author of The September Queen explores Tudor England with the tale of Bess of Hardwick—the formidable four-time widowed Tudor dynast who became one of the most powerful women in the history of England.

On her twelfth birthday, Bess of Hardwick receives the news that she is to be a waiting gentlewoman in the household of Lady Zouche. Armed with nothing but her razor-sharp wit and fetching looks, Bess is terrified of leaving home. But as her family has neither the money nor the connections to find her a good husband, she must go to facilitate her rise in society.

When Bess arrives at the glamorous court of King Henry VIII, she is thrust into a treacherous world of politics and intrigue, a world she must quickly learn to navigate. The gruesome fates of Henry’s wives convince Bess that marrying is a dangerous business. Even so, she finds the courage to wed not once, but four times. Bess outlives one husband, then another, securing her status as a woman of property. But it is when she is widowed a third time that she is left with a large fortune and even larger decisions—discovering that, for a woman of substance, the power and the possibilities are endless.

One paperback available to followers of HF-Connection in USA, please follow the instructions in the Rafflecopter form embedded in this Website:


a Rafflecopter giveaway
Posted by BurtonReview at Tuesday, July 02, 2013