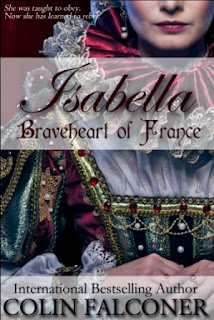 Please welcome Colin Falconer in celebration of the release of his new novel, Isabella: Braveheart of France.

There’s a song originally recorded by The Persuaders in 1971 and covered many times since, most famously by Annie Lennox. It’s called ‘There’s a thin line between love and hate.’

It kept going round in my head when I first read the story of Edward and Isabella.

Isabella was the queen of Edward II of England. Their marriage had been arranged when she was just three years old to try and cement the truce between France and England over disputed territories in Gascony.

Edward was a fine strapping fellow, by all accounts. She was only twelve years old when she married him but was destined to grow into a beautiful young woman. They were the glamour couple of the early fourteenth century, a Brangelina in the making.

But two things stood in the way of their happiness and future success; Edward didn’t particularly want to be king of England and wasn’t really suited to the job; and he had fallen in love at first sight.

But not with her. 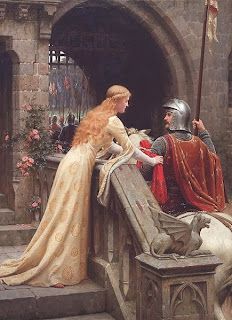 The love of Edward’s life was a former squire named Piers Gaveston. Gaveston was murdered by some of Edward’s disaffected barons when she was seventeen and just growing into woman hood, so it may be that she thought that afterwards their marriage had a chance.

And it seemed that way for a short while. Edward performed his conjugal duties by England if not by her; they had four children over the course of the next decade.

But it seems she never really won his love. She was replaced in his trust, if not his bed, by another of his court favourites, Hugh Despenser, and after the birth of her last child she became an increasingly lonely figure. He sent away her French retainers, separated her from her children and spent little time with her. 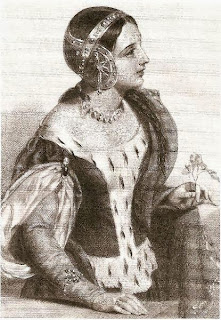 But finally, with the aid of her lover, Mortimer, she deposed him and he died at the hands of his captors in Berkeley Castle. Did she know about the planned murder beforehand? That we cannot know.

Did she come to hate him that much? It is an intriguing question.

More intriguingly - did she love him in the first place?

Isabella was an enigma. After Edward’s funeral at Gloucester Cathedral, she was given his heart in a silver casket. She had never had it in life; she owned it in death. When she herself died in 1358 she was buried, at her own insistence, in her wedding dress, holding the casket to her breast.

How do we interpret such gestures?

Did she wish him dead for spurning her, and when it was done did it trouble her conscience for the rest of her life?

Or was she, as history has painted her, a she-wolf, cold as the alabaster of her tomb, and everything done all for show. 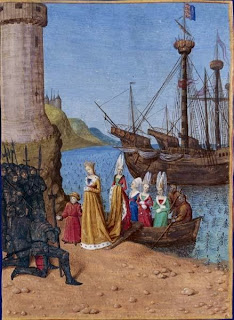 It’s a thin line between love and hate. The heart in the casket. The wedding dress.

What did it mean?

If it was all done for love, it would make their story one of the most poignant in English history.

If it was hate, it was the perfect revenge.

But we can never know, we can only guess. And historical novelists love to guess ...

About the book
ISABELLA, Braveheart of France, available now from Amazon US
And also available as POD from Cool Gus publishing.

"She was taught to obey. But will she learn to rebel?

Princess Isabella of France arrives at the English court to find her husband the king.
She is just 12 years old.
He is one of Europe's most handsome princes, tall young, athletic.
And deeply in love with another.
... another man.
She fights to win her husband's love as his reign descends into crisis after crisis.
To finally create her own destiny she must defy all England.
She must even defy God.
Will she do it?
And what will be the cost?"

About the author
Colin Falconer was born in North London, and spent most of his formative years at school playing football or looking out of the window wishing he was somewhere else.

After failing to make the grade as a professional football player, he spent much of his early years traveling, hitch-hiking around Europe and North Africa and then heading to Asia.

His experiences in Bangkok and India later inspired his thriller VENOM, and his adventures in the jungles of the Golden Triangle of Burma and Laos were also filed away for later, the basis of his OPIUM series about the underworld drug trade.

He later moved to Australia and worked in advertising, before moving to Sydney where he freelanced for most of Australia’s leading newspapers and magazines, as well as working in radio and television.

He started publishing in 1984, mostly humor and young adult fiction, but with the publication of VENOM in 1990, he became a full time novelist.

He has published over 40 books in print. HAREM was an enormous bestseller in Germany and THE NAKED HUSBAND was ranked #9 in Australia on its release.AZTEC stayed on the bestseller lists in Mexico for four months. He is a bestseller in Europe and his work has sold into translation in 23 countries: Brazil, Belgium, Bulgaria, the Czech republic, Croatia, France, Germany, Greece, Hungary, Italy, Indonesia, Korea, Macedonia, Montenegro, Mexico, Poland, Portugal, Romania, Serbia, Slovakia, Slovenia, Spain and Turkey.

He lived for many years in the beautiful Margaret River region in WA, and helped raise two beautiful daughters with his late wife, Helen. While writing, he also worked in the volunteer ambulance service for over 13 years His marriage ended in tragic circumstances, a story he has told in ‘The Naked Husband,’ and its non-fiction sequel, ‘The Year We Seized the Day,’ written with a writing partner, Elizabeth Best.

He travels regularly to research his novels and his quest for authenticity has led him to run with the bulls in Pamplona, pursue tornadoes across Oklahoma and black witches across Mexico, go cage shark diving in South Africa and get tear gassed in a riot in La Paz. He also completed a nine hundred kilometre walk of the camino in Spain.

He did not write for over five years but returned to publishing in 2010 with the release of SILK ROAD, and then STIGMATA the following year. ISABELLA is due to be published in 2013.

His likens his fiction most closely to Ken Follett – books with romance and high adventure, drawn from many periods of history.

Follow the instructions on the Rafflecopter form below to enter for a chance to win one of three eBook copies of Isabella by Colin Falconer!