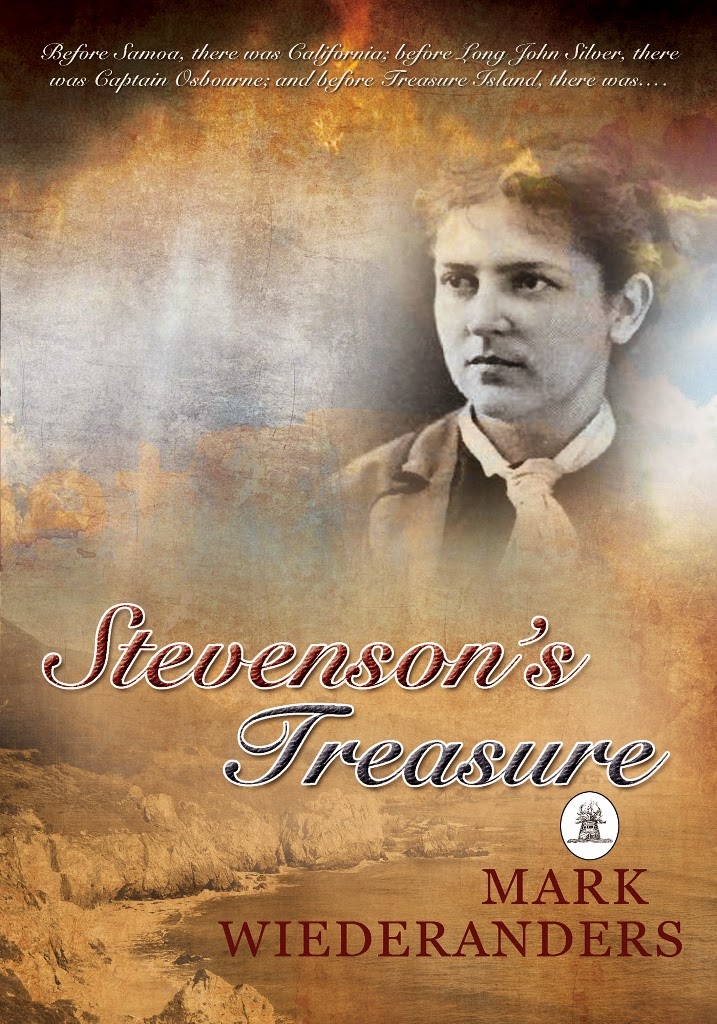 STEVENSON’S TREASURE is a fictional but carefully researched story about the year Robert Louis Stevenson leaves all that is safe in Scotland and journeys to California on what has to be one of the most romantic, ill-advised but successful quests a literary figure has ever made. Unknown and in shaky health, the 29-year-old writer in the summer of 1879 crosses the Atlantic by steamer and the American continent by rail. His objective is scandalous: to make an American art student he met in France, Fanny Osbourne, his wife despite the facts that she is already married (unhappily), has children and is ten years older than him. Showing up on her Monterey doorstep half-dead from several ailments, “Louis” nonetheless proposes marriage. Although her heart longs to say “yes,” she turns him down for a variety of practical reasons. Louis finds cheap lodgings nearby and vows to stay as long as it takes to overcome her objections. In their year-long struggle to somehow have a future together, Louis and Fanny must contend not just with his abysmal health but his inability to sell his writing, her handsome but philandering husband, a contentious teenage daughter and a skeptical ten-year-old son. From this mixture, stirred on a palette of landscapes that include France, Monterey, San Francisco, Calistoga and the Highlands of Scotland comes a more complete triumph than Stevenson had hoped for…

Praise for Stevenson’s Treasure
“With intricately-rendered characters, rich international historical settings, and a warm humor simmering throughout its pages, STEVENSON’S TREASURE reminds us that while pirates, buried treasure, and split personalities can captivate, there is no adventure quite like the deep longing of the human heart.” – Kim Culbertson, Northern California Book Award Winner for Instructions for a Broken Heart.

“In the first lines of Mark Wiederanders’ captivating novel we are introduced to the eccentric, brilliant Robert Louis Stevenson through the eyes of the no less iridescent Fanny Osbourne, and from that meeting, the novel—meticulously researched by an author who has a sense of wicked humor to match Stevenson’s own—plunges forward. Stevenson’s early, absurd efforts to be a published author are almost impossible to juxtapose with his eventual fame, and he and Fanny seem to be in equal measure mismatched and fated. We follow with delight their careening efforts to figure out how to be—if they can be—together, and what that love life will or will not mean for Stevenson’s literary life. A great and unexpected love story, beautifully and compellingly told.” – Sands Hall, author of Catching Heaven and Tools of the Writer’s Craft.

“Drawing on prime sources, Wiederanders’ debut novel captures both the depth and charm of one of the Belle Epoch’s most unique couples; an absolutely sparkling read.” – Persia Woolley, author of The Guinevere Trilogy.

“Stevenson’s Treasure by Mark Wiederanders is an exhilarating ride through the Golden West as we follow Robert Louis Stevenson from France and Scotland to Carmel, California in search of love and inspiration. Wiederanders’ style is richly descriptive, sensual with both a painter’s sensibility (Fanny was an artist) and a writer’s depth of character and detail. This novel brings to light a wonderful love story that is very little known, and entwines it around the larger tale of Stevenson’s ambition to write more than simple short stories or newspaper articles. Fanny and Stevenson come alive in these pages.” – Mary Burns, author of Portraits of an Artist: a novel about John Singer Sargent.

About the Author
Mark Wiederanders lives in Northern California and writes about the private lives of famous authors. His screenplay about William Shakespeare’s family, “Taming Judith” was a finalist in the Academy of Motion Pictures’ annual screenwriting competition and was optioned by a film company. The idea for his current novel, STEVENSON’S TREASURE hatched during a visit to Carmel, when Mark learned that Robert Louis Stevenson suffered a near-fatal collapse in 1879 while hiking nearby. What was the young, as-yet unknown Scottish writer doing so far from home?

To write the novel that resulted from this question, Mark studied hundreds of historical letters and visited sites near him in Monterey, San Francisco, and Calistoga. Then he followed Stevenson’s footsteps to Europe, lodging at the Stevenson home in Edinburgh followed by a week in the Highlands cottage where RLS wrote TREASURE ISLAND. Mark is also a research psychologist (Ph.D, University of Colorado) who has studied treatment programs for delinquents and the criminally insane. His interests include acting in community theater (recently a Neil Simon play), downhill skiing, golf, and spending time with his wife and three grown children.

For more information please visit Mark Wiederander’s website and blog. You can also find him on Facebook.

Follow the instructions on the Rafflecopter form below to enter for a chance to win a Kindle or Nook eBook, or a paperback copy (U.S. only), of Stevenson's Treasure!