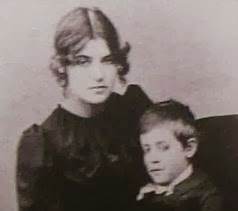 I bet many of you have noticed I haven’t brought up women artists during any of my posts about nineteenth-century Montmartre. There a very good reason. One had to search high and low to find a female painter during those times. Life was hard for these artists, and would have been even more difficult for a female. Plus, even though Paris was more forward thinking than most of the world in regard to females and their roles, they still were primarily thought of as wanting to be wives and mothers. Anything else they did beforehand tended to be seen as something they did to pass the time until Mr. Right came along.

There were a few, though. Berthe Morisot is considered one of the original impressionists. She was very much part of the inner circle of the great artists of the time. I will perhaps do a post on her later, though. Today I want to talk about Suzanne Valadon. You see, although she was far from perfect, I greatly admire this woman. Here was a female who came from nothing. She struggled her whole life, yet she refused to be put in her place sexually, socially, or in regard to her painting career. Color outside the lines? My dears, for Suzanne there simply were no lines to begin with!

She was the bastard child of a French laundress, and her birth name was born Marie Clementine Valadon born 1865. She was working by age eleven in a milliner’s workshop. From then on she worked at various jobs: waitressing, selling vegetables, and even making funeral wreaths. For an unwed mother life wasn’t easy, and her daughter learned early she’d have to make her own way.

When she became a teenager she made friends with some of the artists in the area. They helped her get a job as an acrobat in the circus. Circuses were big around that time, and many circuses performed around the area. Her circus career didn’t last long, as she fell from a trapeze and hurt her back. She healed, but didn’t work as an acrobat anymore.

Her next job was artist’s model. I mentioned in a previous post how being an artist’s model was only one step above being a whore. It was long hours of sitting still, and then many times satisfying the artist’s sexual needs. Everyone assumed Suzanne had sex with the artists she sat for; as it was common knowledge the artist’s considered sex with the model their right. They were correct in regard to Suzanne. She had affairs with many of the artists she posed for, including Chavannes, Renoir, and Toulouse-Lautrec. As you can see from her photo, she was a beauty. It isn’t hard to understand why these men coveted her sexual attention.

She was also known for being unruly and without restraint. Suzanne would often come home in the early hours of the morning, drunk and screaming obscenities into the night. Sometimes she washed clothes outside while topless. She routinely frequented Au Lapin Agile and Chat Noir, and once slid down a staircase banister completely naked except for a mask at another club.

She became pregnant at eighteen and bore a son: Maurice. He would become a famous painter himself, and was actually the only artist from that era who was born and raised in Montmartre.
She was never sure who Maurice’s father was. People guessed, naming Miguel Utrillo, Renoir, Puvis, or another artist name Boissy. Miguel Utrillo later gave Maurice his name, but no one ever knew if he really was Maurice’s father. Suzanne continued her wild lifestyle and counted on her mother to raise her son. When she did take care of Maurice she would give him whiskey in his bottle to get him to go to sleep. She became a better mother later, but motherhood was not her strong suit.

What made her different from most sleep-arounds was this: Suzanne dared to dream. During this whole time she was studying. She studied the techniques of those she posed for and soon began painting. Degas befriended her in 1890 and took note of her talent. He worked with her, teaching her how to further develop her painting skills. He even bought several of her paintings and got her career started. In fact, because of him she became the first woman to ever show in the prestigious Société Nationale des Beaux-Arts.

Before Degas her work was all pastel or pencil. After working with Degas she began using oils. She did a portrait on Eric Satie, a famous composer. After a very intense affair, he asked her to marry him. She turned him down. Next she became involved even more heavily with a stockbroker named Paul Mousis. She did marry him, which gave her the financial freedom to paint and draw full-time. Her style was full of energy, very frank and raw. She was unfettered in regard to style or technique since she’d had no formal training. However, once they left the city she really struggled to find a balance between being a wife and a painter. Then her son, Maurice, developed alcohol problems (before he was a teenager) and also suffered from mental illness.


At age 44 she met one of her son’s friends. His name was Andre Utter. They had a hot and heavy affair, even though he was only 23. He encouraged her to begin painting more. Once she did, her painting career really took off. “Adam and Eve” was a portrait of herself and Utter. It was the first to show a fully nude couple together done by a woman. Since she wasn’t careful about the affair, her husband found out and they divorced in 1910. 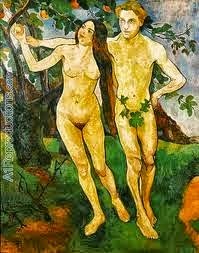 She moved in with Utter, along with her son and continued to paint. She had some shows, but was becoming less noticed than her son and other artists in the area, like Picasso. Utter married her in 1914 before leaving for the war so she could get an allowance from the military. He got injured, and she left to be closer to him. After the war, they came back to Paris. He marketed his, Suzanne’s and Maurice’s work. Maurice sold the most of the three.

Suzanne received positive critical acclaim and had several showings at different galleries, but sales were moderate. She signed a contract with an art gallery in 1914 and had enough money to live comfortably and buy a country estate. She stayed there frequently, painting. Things were blowing up between the three of them, due to jealousy over Maurice’s popularity and Utter’s drinking and womanizing. Suzanne simply continued to paint and had two major retrospectives of her work shown.

In 1935 Maurice married and moved out, and her husband also left, although they never divorced. Her health deteriorated, but she continued to paint and see friends. One day in 1938 she was painting at her easel when she had a stroke. She died only hours later at age 72.

During the later twentieth century there was finally an increased appreciation for women artists, but still—as always—it’s the men that still garner the majority of attention. Those men were great, no doubt about it. They deserve their recognition and I admire them very much.

Still, I can't help but feel as a women myself that part of the reason Suzanne wasn't (and isn't) talked about as much was because she dared to live life as fully as a man during a time when that was deeply frowned upon, even in Montmartre. When she is brought up, her sexual activities are mentioned much more often than her almost 500 paintings (not counting those destroyed or lost). In fact, none of the females that painted during that time are ever discussed as much as their male counterparts and that's unfortunate. Suzanne and others who dared to "paint with the boys" were important contributors to the bohemian art era.

So, today I want to thank Marie Clementine Valadon aka Suzanne. You had balls during a time where having balls made you an outcast, girl. And, by the way, your work ROCKS. Despite your flaws as a mother, I respect you talent and nerve, and hope to do a historical fiction novel featuring you one day. Until then, may you rest in peace, in harmony with “The Color”.