Review: A Poisoned Season by Jennygirl

Another review from Jennygirl, the resident book reviewer here.. 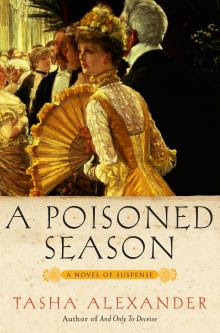 
London's social season is in full swing, and Victorian aristocracy is atwitter over a certain gentleman who claims to be the direct descendant of Louis XVI and Marie Antoinette. Adding to their fascination with all things French, an audacious cat burglar is systematically stealing valuable items that once belonged to the ill–fated queen.


But things take a dark turn. The owner of one of the pilfered treasures is found murdered after the theft is reported in the newspapers, and the mysterious thief develops a twisted obsession with Lady Emily Ashton. It takes all of Lady Emily's wit and perseverance to unmask her stalker and ferret out the murderer, while faced with a brewing scandal that threatens both her reputation and her romance with the dashing Colin Hargreaves.

This book was a fun and fabulous read. Emily is fortunately an "independent" woman who is ahead of her time. She furthers her intellectual pursuits, such as learning Greek, while trying to maintain balance with her position in society and its conventions. Victorian women were not supposed to be strong, intelligent women, who were interested in the goings on in the world. Gossip and fashion were a woman's domain. Emily is an independent thinker, and unfortunately this got her into trouble with society's matrons. Luckily for her, Emily was able to manage her troubles.

Tasha Alexander captures the conventions and formalities of Victorian society very well. Women were usually trapped with no real voice or opinion with respect to their futures, yet Emily is lucky enough to be able to try and control her fate by staving off another marriage, to a man she is in love with no less. The conversations between her and Colin Hargreaves are sweet, romantic and passionate. The conversations reminded me of a duel.

Keep in mind, Emily did all this while trying to solve a few mysteries along the way. The mysterious circumstances in the book were quite suspenseful. They seemed like multiple plot lines and yet connected. One mystery from many different angles.

Emily is a delightful a heroine who is quite capable of not only taking care of herself, but others who may find themselves in need of assistance as well. This book was truly a novel of suspense and kept me guessing until the very end, including the romantic aspects as well. I felt as though I was transported to Victorian times, and I look forward to reading the next in the series as well.

I would like to note, that this is the second book in the series. Events from the first book are described, but I liked this book so much that I will go back and read the first one too. Regardless of knowing the plot.

This was a very satisfying, enjoyable, fun, and easy read. I highly recommend it!

Thanks to Jennygirl for allowing us to republish this review here. Visit Jennygirl and read more of her book reviews at her website Jenny Loves To Read.
Posted by BurtonReview at Thursday, June 24, 2010