Richard III: What's HIS story? by Robin from The Lady Gwyn's Kingdom

And for more on the Wars of the Roses, and the always intriguing topic of Richard the Third, Duke of York... Murderer or Maligned King? Robin explores.. 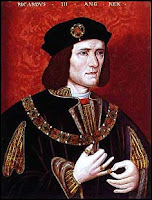 If you ask someone about Richard III and if they actually know who you are talking about, their response is probably going to include: evil, hunchback, killed his nephews in the Tower. We have the wonderful William Shakespeare to thank for this view of Richard. I never bought into the evil, hunchbacked Richard of Shakespeare. I realized he was writing to satisfy the current Tudor monarchy and it certainly wouldn't do to have a nice Richard (or to make Elizabeth I's grandfather look like a usurper, which would make her claim to the throne shaky, etc). Aside from that, I never thought much about him until about the last year, when I started reading a lot on the War of the Roses and have spent lots of time researching on the internet (and listening to the folks in various discussion groups and forums) and came up with my humble opinion on what could have happened.
First, as to if he wanted the crown or not, I think most people at the time probably would not have minded having the crown of England on their head. I doubt Richard was any different. However, I don't think he ever believed the opportunity would come his way, since he was first, the 4rd son of the Duke of York, and second, once Edward had sons they would naturally come after him. He also seemed quite content being Lord of the North and was very well liked in the northern part of England. So to that I don't think he lusted after the crown and power, but once the opportunity presented itself, he took it. 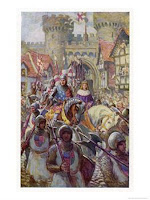 Now, as to how that opportunity came about. From what I've read about Richard, it seems that he was a fairly good and honest person (as much as human beings can be anyway) who wanted to do what was good and right for the people. It certainly doesn't seem like he wanted the crown upon his brother's death. Something had to have happened to make him believe that the Woodvilles were up to something. He might have been concerned with what the Woodvilles would do, not only to him and his family, but also to the country, as they do come across as rather grasping and power hungry (I am not for or against the Woodvilles, just want to make that clear). Making sure that he was there with Edward V before he got to London and in the clutches of his mother's family was, in his mind, probably the only way to make sure that Edward IV's command that R3 be Protector was carried out (it is documented, I believe, that Richard was already weary of the Woodvilles). It does seem that he had every intention of making sure his nephew was crowned King of England (having people swear fealty to Edward, planning for his coronation, etc). If he had started out with the intent on taking the crown, why did he not come down from York with a full complement of soldiers ready for battle? He only sent for them later on and that, to me, seems like the actions of someone worried for his safety. He knew his brother wanted his son to follow him and Richard usually followed Edward's orders. So something must have happened to alter Richard's plans for Edward V. When he was confronted with the evidence (I have to believe that Stillington had SOMETHING that proved a pre-contract since I don't think Richard would just take one person's word on something that important. Then again, he might have been that trusting.) that Edward V was illegitimate, he felt that the only right thing to do was to accept the crown. I don't believe he set out with the intention of cheating his nephews out of what was rightfully theirs (and after they were declared illegitimate, it wouldn't have been their right anyway, correct?). This many years distanced from the events it is hard to know what R3's true feelings and intentions were, of course.

On to probably the biggest mystery of R3's reign: the boys in the Tower. I honestly don't think Richard killed them or ordered their murder. Even if they WERE illegitimate, they were still his nephews and he seemed very loyal to his family. I have two theories on what happened to them.
1. Buckingham, on his own, took matters into his own hands and had the boys murdered, hoping that Richard would thank him for helping him out of a delicate situation. Then, Buckingham heads a rebellion against this same King he had been friends with. If this rebellion happened AFTER the boys disappeared and it was rumored that they were dead, Richard may have discovered that Buckingham had ordered it and become really angry at him, words may have been exchanged, Buckingham may have thought that he would loose the power he DID have and R3 would possibly arrest HIM, thus causing him to think that his best chance of survival (and retaining some power) would be to back Tudor. Now, why, if Buckingham did the boys in, didn't R3 make some public acknowledgment of what happened, thus possibly clearing his name? Leaving it in the dark certainly made him look worse. It could be that, seeing how public opinion was already turning against him, he knew that the public would probably never believe that he hadn't ordered it in the first place.

2. It seems fairly logical that the person with the most to gain or loose from the boys being dead/alive is Henry VII. If they are still alive, whether legitimate or not, they are going to be a rallying point for people still loyal to the Yorks and wanting to get rid of HIM. It seems that having them secretly murdered and letting the blame fall on Richard solves his problems. Smearing the reputation of the monarch you just defeated is always helpful. With them dead he can legitimize Edward IV's children so he can marry Elizabeth without the taint of bastardy and not have to worry about anyone trying to set Edward V or the little Duke of York on the throne. As to the evidence proving Edward IV's pre-contract, I think that if there was hard evidence proving this, Henry would have destroyed it as quickly as possible. He needed Elizabeth of York to be legitimate to help his claim. He did destroy all copies of Titulus Regius, which had declared all of Edward IV's children illegitimate.

His mother, Margaret Beaufort, also could have ordered them murdered, knowing that having them permanently out of the picture would make the way easier for her son (she was rather ambitious for him, wouldn't you say?). If this was the case, and he didn't know, it could explain why Henry VII was so cautious about Perkin Warbeck's claim to be Richard, Duke of York. She certainly was aware that Elizabeth of York was a key to holding the support of Yorkists and a marriage with her would help solidify his claim but she had to be a legitimate heir to the crown. However, once you legitimize her, you do the same for her brothers, so they had to be out of the way.

What about Shakespeare's version of Richard's story? Well, consider a few factors here. The biggest is of course, the fact that Shakespeare's monarch was Elizabeth I. It certainly wouldn't have done Will's career any good to write a play portraying the grandfather of England's favorite monarch as a usurper. Shakespeare also based some of his play from Thomas More's A History of Richard III which was considered "the" authority on Richard's life. Without going into a lot of detail here, More was just a small child when Richard was King and was defeated by Tudor so he would not have a reliable memory of what happened during Richard's life or reign. He seemed to have gotten a lot of HIS information from a man who had hated Richard. Also, as with Shakespeare, you need to look at who was the reigning monarchs when More was writing: Henry VII and Henry VIII. I see More's work as Tudor propaganda to further discredit R3. What better way to turn public feeling against a beaten King than turning that King into an evil, nephew murdering hunchback?

These are just my opinions. Now, Richard could have been lusting after the crown and made up the pre-contract and then had the boys murdered. It also has never been proven that they WERE murdered. It is entirely possible that R3 had them moved somewhere secretly for their own protection. Maybe Henry VII is totally blameless. Who knows for sure unless something concrete is discovered. Anything is possible. That's what makes it so interesting and fascinating.

Reprinted with permission. Thank you to Robin  from The Lady Gwyn's Kingdom for submitting this post and sharing her opinions.
What are your opinions on the famous Richard III?
Posted by BurtonReview at Friday, June 18, 2010

Email ThisBlogThis!Share to TwitterShare to FacebookShare to Pinterest
Labels: Richard Duke of York, Wars of the Roses