Why the Howards? by D.L. Bogdan, author of Secrets of The Tudor Court 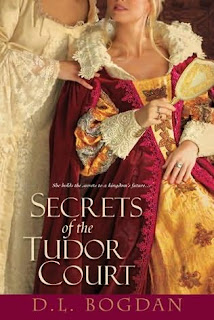 Please welcome D.L. Bogdan, a debut author of Secrets of The Tudor Court which released May 1, 2010 from Kensington Books.

The Tudor era brings many images to mind. Most of the time, we think of the main cast: young Henry VIII, dashing and golden (or old Henry VIII--not so dashing and golden), vivacious Anne Boleyn, devout Catherine of Aragon, and the many figures that make the Tudor saga come to life. But what of the supporting cast? Those that turned the gears in the great medieval machine that has become as compellingly epic as the Arthurian legends? My goal in SECRETS OF THE TUDOR COURT (Kensington Books) was to bring some of these more peripheral personas to life. I chose Mary Howard as my subject; the daughter of the ambitious and cruel 3rd Duke of Norfolk Thomas Howard, and the wife of Henry Fitzroy, Henry VIII's illegitimate son. She proved to be a challenging and unique window into a familiar tale and was tough to research.

Any information I could gather was included in the story to authenticate my work but my job as an entertainer came into play as I creatively filled in some gaps to make for a fast paced, character driven study of a father and daughter's love-hate struggle in a time where living beyond the shadow of the executioner's axe was quite an accomplishment. When writing SECRETS OF THE TUDOR COURT I became fascinated with the antagonist Thomas Howard and delved into researching him in more depth. This led me to writing a companion piece, tentatively titled RIVALS IN THE TUDOR COURT, which will be released in roughly 9 months to a year by Kensington Books.

RIVALS IN THE TUDOR COURT focuses on Thomas, his fiery wife Elizabeth Stafford, and vulnerable mistress Bess Holland. This book was derived from a wealth of research, as there was a great deal more information about the duke available to me than his young daughter Mary. Both books were a joy to write and I am thrilled to share them with The Historical Fiction Connection. SECRETS OF THE TUDOR COURT is available on amazon.com and at your local booksellers. If you'd like to know more about me and my upcoming works, please feel free to follow my new blog at http://www.dlbogdan.blogspot.com/


Thanks so much to D.L for providing us with this post. You can visit reviews of her first novel, Secrets of The Tudor Court here: