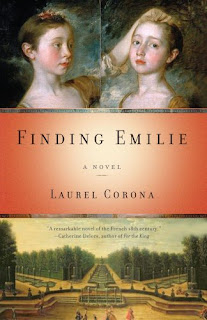 My third novel, FINDING EMILIE, is coming out one week from today, and I am so excited! The people who have seen advance copies have loved it, and the reviews have been great so far.

It’s based on the real-life story of Emilie du Chatelet, a French Enlightenment mathematician and physicist who lived in the decades just before the French Revolution. One of the great contributors to understanding of Newtonian physics, she published little in her lifetime because she was a woman. Today, those who have heard her name usually know only that she was Voltaire’s lover. They lived together for fifteen years at her absent husband’s remote ancestral estate close to the border with the semi-independent Duchy of Lorraine (Emilie’s husband didn’t mind, because Voltaire was renovating the chateau with his own money--such were the times!) Though far from the excitement of Paris, Voltaire could quickly get out of France if his writing got him in trouble with the censors.

Emilie was a bit of a wild one, whose three great loves were “study, gambling, and greed,” but her fourth proclivity, tempestuous love affairs with whomever pleased her, caused her to become pregnant at the unheard of age of forty-three. She paused from her great translation and commentary on Newton’s Principia Mathematica long enough to deliver a daughter, but six days later, within hours of putting the sealing wax on her greatest work and sending it off to the French Academy of Science, she complained of a headache and within hours she was dead.

FINDING EMILIE is the story of that daughter, Lili, whose own independent streak both confuses and exhilarates her. Kept from knowing most of the details of her mother’s scandalous life, as her own future closes in around her--a loveless, aristocratic marriage and the abandonment of her own identity and life goals--Lili sets out to “find” Emilie, discovering a story that is far beyond what she (or the reader) imagines. And it’s all true!

I hope you enjoy “finding” Emilie du Chatelet as much as I did. If you are a library book reader, I hope you will ask your library to put FINDING EMILIE in its collection. If you are an e-book reader, it’s available in all the major formats. And if you like holding your own copy in your hands, right now Amazon is offering it for only $8.56 (close to half off). That price is unlikely to continue after the pub date. I’ve been told it will be on front tables or racks at Barnes and Noble for a couple of weeks, so you can find it easily there, or my favorite option, patronize your local, struggling, independent bookstore.

Thanks again for all your support. I’ll try to keep writing interesting books for you!
~~
Thanks to Laurel for allowing us to post this.. she will also be back later this month with an article.
Her books can be found at online retailers at the following links:
Amazon
Barnes and Noble
Book Depository
Borders
Posted by BurtonReview at Tuesday, April 05, 2011