Please welcome Kate Quinn to Historical Fiction Connection, and see below to enter for your chance to win a copy of her newest release, Daughters of Rome.


Sex and the City (of Rome)
By Kate Quinn, author of Daughters of Rome
I'll admit to a certain guilty pleasure of mine right off the bat: Sex and the City. Oh, I mocked it, but I still swooned over the clothes, the humor, the girltalk. And I've had a chance to catch up on SATC now that my second historical fiction novel Daughters of Rome is released. Which is why I've started to think of Daughters of Rome, set during the Year of Four Emperors, as “Sex and the City of Rome.” I have to admit, it didn't strike me at the time when I was writing it, but there are certain similarities . . .

SATC popularized “Carrie” necklaces, Prada gowns, and Manolo Blahnik stilettos. DoR might end up popularizing ruby necklaces, goddess gowns, and gladiator sandals. (For women who are not a size zero! Roman fashion went for a curvier, softer silhouette, which frankly the skinny gals of SATC could have used. I adore Sarah Jessica Parker, but the woman needs a few cheeseburgers.)

Carrie & Co. collectively faced pregnancy, divorce, abortion, adultery, and cancer. Plus trying to afford Louboutins during a recession. Marcella & Co. face pregnancy, divorce, abortion, adultery, and widowhood. Plus trying to stay alive when your political leaders are massacring each other literally on your doorstep every three months or so. Warring emperors aside, I guess the problems women face haven't changed so much over the millennia.

Perhaps that is the real reason Daughters of Rome is reminiscent of “Sex and the City,” all jokes aside. In the end, women face many of the same problems whether they happen to live in modern day New York or first century Rome. A girl who has gone through a divorce feels just as lousy about it whether the process involved a team of expensive lawyers (modern day), or just moving out of the house (ancient Rome). Both Roman women and modern women faced the agonizing choice of “adoption, abortion, or single motherhood?” when faced with an unwanted pregnancy. A passionate affair with the wrong man is just as confusing and heartbreaking whether the man in question is a married stockbroker with commitment issues, or (gasp) a slave.

What I'd love to see is Carrie and her friends meet up for brunch with Marcella and hers. Let's assume the English-to-Latin translation is seamless, and plenty of drinks are provided. After a certain awkward period where the Roman girls splutter over their very first taste of a Cosmopolitan, and the modern girls are introduced to Roman wine so strong it can be lit on fire with a match, I see this discussion going well. Marcella would be fascinated by Carrie's columnist gig - “Women get paid for writing here? I'm never going back!” Charlotte and her Roman counterpart Cornelia would bond instantly over the years they both spent yearning for babies; Charlotte pats Cornelia's hand a lot and assures her that it will happen someday, just you wait. Miranda and her tomboy equivalent Diana will both be talking at once, Miranda trying to explain baseball and Diana trying to explain chariot racing. And Roman party girl Lollia will be swapping hair-raising sex stories with Samantha: “A pearl thong? That's nothing; I wore sapphire nipple caps once. Never again, you wouldn't believe the chafing. Now tell me more about these things called vibrators . . .”

“Sex and the City of Rome” - now that would be a show worth seeing. HBO, if you're out there, Daughters of Rome has not yet been optioned for film . . .

Thanks for having me to the Historical Fiction Connection! It’s been a pleasure.

﻿﻿
A.D. 69. The Roman Empire is up for the taking. The Year of Four Emperors will change everything-especially the lives of two sisters with a very personal stake in the outcome. Elegant and ambitious, Cornelia embodies the essence of the perfect Roman wife. She lives to one day see her loyal husband as Emperor. Her sister Marcella is more aloof, content to witness history rather than make it. But when a bloody coup turns their world upside-down, both women must maneuver carefully just to stay alive. As Cornelia tries to pick up the pieces of her shattered dreams, Marcella discovers a hidden talent for influencing the most powerful men in Rome. In the end, though, there can only be one Emperor...and one Empress. ﻿﻿ 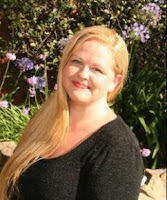 Kate Quinn is a native of southern California. A lifelong history buff, she first got hooked on ancient Rome while watching I, Claudius at the age of seven. Still in elementary school when she saw the movie Spartacus, she resolved to someday write a book about a gladiator. That ambition turned into Mistress of Rome, written when she was a freshman in college.


Would you like to win your own copy of Daughters of Rome? Why?
Enter below by leaving your answer with your email address. Open to HF Connection followers in the USA and Canada, ends 4/26/11!