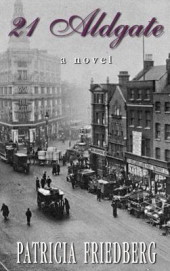 21 ALDGATE set in pre-WWII London’s Jewish East End and fashionable Chelsea, is a story of the relationship between the artist, Paul Maze and its lasting effect upon the life of his young married assistant, Clara, during and after the writing of his memoir of the Great War, Frenchman in Khaki, Heinemann, London 1934.

It is a story of love and war that bears witness to the prejudice, bias, aggression and propaganda that influenced British society during the buildup to WWII; contrasting the political climate of Mosley’s fascists, the brutal attacks and police protected march through the Jewish East End culminating in the infamous Cable Street Riot - to the charade of the Upper class societies denial of the impending Nazi threat.


21 Aldgate is an address in the East End of London. It is home a working class Jewish family, the Levys, and in particular their married daughter Clara and her husband Sidney.

A few miles away in Chelsea is 14 Cheyne Walk, home to the wealthy, successful and charismatic Paul Maze. The distance only a few miles, yet in 1930’s England it was a social divide virtually impossible to imagine, let alone cross. And so begins a journey for Clara, every day a few miles on the bus, every day a little further from Aldgate and her family and the husband she loves.

Clara is introduced to the society Maze moves in, the privilege he enjoys and despite the prejudice she encounters, a passion grows between she and Maze.

We learn of Maze friendship and support of Churchill during the period that has come to be known as the Appeasement. Clara travels with Maze, first to France and later on a dangerous undercover mission to Germany where she witnesses first-hand the Nazis thwart upon the Jews. Even as she ventures further from 21 Aldgate, attacks on her East End community by Mosley’s fascists and her strong family ties cause her equal consternation.

Maze largesse, regardless of his elitist place in society, undertakes dangerous war assignments during WWII, engages Clara in the recording the placement of mines along England’s southeastern coast with the German forces only miles across the channel; and during the war, asks her to assist at his London gallery which fronts for the French Resistance.

Caught between two worlds and the two men she loves, Clara is forced to choose between tradition and class distinction, love and duty and ultimately between passion and responsibility.

21 ALDGATE is about a place in time, a place that no longer exists except in rapidly fading memories. It tells a story of social classes, people and their traditions, a family and its fate, a country and its fight against fascist and a woman with a secret she must take to her grave.

Patricia Friedberg’s screenplay based on her novel 21 ALDGATE, Rainbow Books, Inc., Highland City, Florida, USA. 2010 is in development in the UK to become a major feature film.
Posted by BurtonReview at Monday, May 16, 2011