It was then they made the sun stand still
to the end of nine months—strange the tale—
warming the noble ether
in the roof of the perfect firmament.
From: Metrical Dindshenchas
Thank you to Historical Fiction Connection for the opportunity to comment on what inspired Bending The Boyne, set at 2200 BCE . This new novel reworks a bit of Irish legend, the oldest literature of western Europe.

Myth has endless possibility for interpretation and re-telling. The Isles’ myths were transcribed in a much later millennium from the native tongues (old Irish, and old Welsh) by devout but cold, hungry, physically cloistered monks. How much authentic oral history or fact the written version contains from a time prior to any Celts or to Christianity, is hotly debated.

What inspired Bending The Boyne specifically was a passage of medieval text that describes the huge and intricately engineered Boyne mounds as “elfmounds.” Wow, that’s some piece of propaganda! Newgrange at the river Boyne has over half of Europe’s prehistoric rock art and is a UN World Heritage site. How did these impressive mounds come to be later dismissed as the home of elves and fairies? As it happens, the Boyne mounds and the ancient Kerry copper mine are among the few places in the Isles where early “Beaker” pottery has been found. That Beaker presence implies a new culture, new belief systems. By our era around the year 2000, academics began to see a pattern of the megaliths having been abandoned or even proactively destroyed along the north Atlantic coasts of what is now Spain, Brittany, and the Isles. The common factor appears to be metals and the Beaker influx at around 2500-2200 BCE. The plot for the novel plays with the concept of hidden gold on Eire, that the invaders cannot find the real gold right under their noses any more than they understand the natives’ golden knowledge.

A story of drastic change and cultural conflict developed, from what I saw traveling in Spain, Brittany, and Ireland, and also read in extensive research; a conflict between the native astronomers and the incoming metal-seekers. There is also a Who’s Your Daddy? twist to Boann’s legend and the mysterious birth of her son Aengus that highlights the differences between natives and the newcomers. “...they made the sun stand still to the end of nine months / strange the tale...” : from the Dindshenchas.

Astronomy plays a major part since it is clear that the ancients built the mound landscape to connect with the skies. The magic in this novel relies on the old adage that truth is stranger than fiction! This tale is probably not for readers looking for mysticism or stories of druids, cauldrons, and clashing sword battles—and anyway those are anachronisms to the early Bronze Age. This is fiction in the vein of Jean Auel set in prehistoric Europe, or the Gears’ works set in ancient North America.

Historical fiction can bring science to life in a way that nonfiction or academic works usually cannot. I hope Bending The Boyne accomplished that. It’s one thing to read about the count of various animal bones per square meter in the excavation report from Newgrange mound; it’s another thing to realize that the horse bones are from Ireland’s first horses, visualize how the horses came to the Boyne and the foreigners, warriors with long knives, who brought them and how that impacted the natives; and put all that into a story line in a meaningful way.

For readers who want an adult fairy tale this novel would not be their best choice. For those willing to look deeper for symbolism in a new spin on the myths, it is a great choice. This is the first novel that brings to the public the new approach taken by eminent scholars like Barry Cunliffe at Oxford and linguist John Koch, to what “Celtic” means and where the north Atlantic shared culture probably began: not in central Europe with the Iron Age.

As Ireland’s centennial of the Rising approaches in 2016, it is also hoped this novel contributes toward understanding of the past and the Troubles, and the reunification of all Ireland “for all eternity” as the mythical Aengus had it. 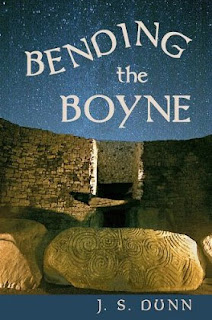 Bending The Boyne (March 2011)
Circa 2200 BCE: Changes rocking the Continent reach Eire with the dawning Bronze Age. Well before any Celts, marauders invade the island seeking copper and gold. The young astronomer Boann and the enigmatic Cian need all their wits and courage to save their people and their great Boyne mounds, when long bronze knives challenge the peaceful native starwatchers. Banished to far coasts, Cian discovers how to outwit the invaders at their own game. Tensions on Eire between new and old cultures and between Boann, Elcmar, and her son Aengus, ultimately explode. What emerges from the rubble of battle are the legends of Ireland's beginnings in a totally new light.
Bending The Boyne draws on 21st century archaeology to show the lasting impact when early metal mining and trade take hold along north Atlantic coasts. Carved megaliths and stunning gold artifacts, from the Pyrenees up to the Boyne, come to life in this researched historical fiction.
The author resided in Ireland during the past decade to research Bending The Boyne. J.S. Dunn can be found on: http://www.jsdunnbooks.com/ or http://www.seriouslygoodbooks.net/.  The author has a second novel underway, set later in the Atlantic Bronze Age during another period of great change.
~~~~~~~~~~~~

How about snagging your own copy of Bending the Boyne?
Leave a comment here with your email address, and you are entered in this book giveaway, courtesy of the publisher.
Get an extra entry for each tweet, facebook that you link this post to!
And get an Extra 3 entries for posting on your blog with the graphic above, linking to this post.


Be sure to leave those links in the comments.