Giveaway! Signed copy of Rivals in the Tudor Court by D.L. Bogdan


About RIVALS IN THE TUDOR COURT
by DL Bogdan
﻿
﻿

My fascination with Thomas Howard, 3rd Duke of Norfolk evolved while writing my debut novel SECRETS OF THE TUDOR COURT. I had been writing about his daughter, the oft’ overlooked Mary Howard, who was the wife of King Henry VIII’s illegitimate son Henry Fitzroy, and trying to fill in the gaps of a tragic life that remained far too sketchy. As I wrote about her, I wondered what factors could have led her father to become the callous abuser he was during his daughter‘s life. Did the answer lie in the old “nature vs. nurture” debate? As most psychological studies indicate, abuse is typically cyclical, passed down from one abuser to another. Who abused Norfolk? Or did he start the cycle? With these questions in mind, I began to delve deeper into his life, along with the lives of his wife Elizabeth Howard and mistress, Bess Holland.
Bred for ambition and fueled by avarice, the duke’s lot wasn’t easy. The Howard family were the “comeback kids” of their time, falling from grace to rise again on numerous occasions. I imagine, as the eldest child and heir to the on-again-off-again dukedom of Norfolk, this had to put a lot of pressure on Thomas Howard, who was a “hostage” in King Henry VII’s court along with his brother since childhood while their father, the attainted Earl of Surrey, was doing time in the Tower of London for his supporting Richard III. Thomas was married to Lady Anne Plantagenet and together they had a family of four children. There is little indication is his early years that he would be the abuser he became as he aged. Besides a by-the-whip childhood typical of a medieval upbringing, I assert that the major turning point in Thomas’ life was the loss of his first wife and all four children in quick succession. I cannot imagine any normal human being surviving such grand-scale loss and coming out unscathed. 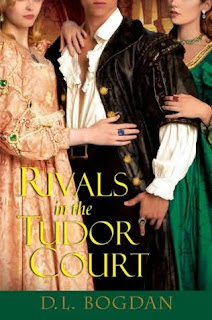 Shortly after Lady Anne’s death, Thomas was encouraged to marry again to ensure the Howard line. He chose the fiery Elizabeth Stafford, daughter of the Duke of Buckingham. Years of struggle and misunderstandings ensued as the couple bore and lost children, entwining their fates with Henry VIII and Catherine of Aragon, alliances that would become a divisive factor in their marriage. As Thomas gained power and lost perspective, he took on a mistress Bess Holland and became progressively more abusive toward his wife and controlling of Bess and his children. Elizabeth was a woman ahead of her time, seeking help from Privy Seal Thomas Cromwell and Henry VIII himself. She was a lone voice in a time when women were silent. Her cries for justice were ignored by the men of her time, but they resonated through the centuries to our time. If the reader only takes away one thing from this book, I would hope it would be this: that women today have a voice. We don’t have to be the prisoners so many of our sisters in the past were: there is help and there is healing for both the abused and the abusers.

While trying not to impose contemporary thought into their unbearable situation, remaining true to the ideals and accepted values of the time period, the novel is a powerful illustration of abuse in a brutal time when getting through each day alive and sane remained an act of heroism, a fact that is rarely appreciated in our desire for larger than life, save-the-day leads. RIVALS IN THE TUDOR COURT explores Thomas’ descent into inhumanity and chronicles the remarkable women who loved him despite himself.
~~
Thanks so much to D.L. Bogdan for stopping by! You can read a review of Secrets here or here, and Rivals here.
Also, D.L. was here before with this article she provided for HF-Connection. You can also visit her blog here.

If you would like to read Rivals in the Tudor Court, comment here for your chance to win your very own autographed copy! The author is generously providing this to one of our lucky followers, so let's show her some well deserved love! 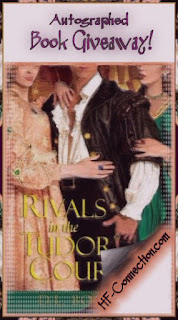 Comment with your email address telling us what intrigues you about the Tudor courts, or Thomas the Creep Howard!
Get an extra entry for each tweet, facebook that you link this post to!
And get an Extra 3 entries for posting on your blog with the graphic above, linking to this post.
Be sure to leave those links in the comments.