Please welcome Fred Stemme, author of a new novel just released on February 12, 2012: The Lieutenant's Whistle in which he writes of "duty, romance, bravery, tragedy and fate all intermingling in the hell of war." 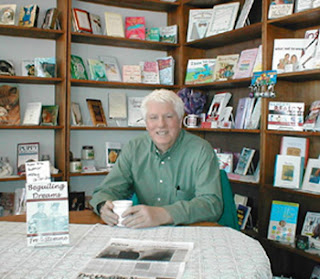 Fred is working on a trilogy that began with Beguiling Dreams, and is eager to share with readers his second installment, The Lieutenant's Whistle. You can read Chapter one of Beguiling Dreams on his site.

Today he has the following to share with you, to whet your own whistle!


In September of 1915, young Hank Braddock laid on his bed in Calvin, Indiana reading an article in The Outlook. Hank read the descriptions written by an American volunteer ambulance driver with rapt attention. It was as if he himself was behind the wheel and could even hear the ping of artillery shrapnel ding his Model T’s hood and chassis while driving to the hospital with a load of wounded soldiers. An introduction written by Teddy Roosevelt prefaced the article, giving it credence.


He gazed across the room at his small bookshelf. King Arthur and the Knights of the Roundtable stared back at him. That’s what the article reminded him of, knights, this time driving ambulances, in pursuit of service to the realm. And would that include fair damsels in the form of nurses?

A few months later Hank stood in the town’s newspaper office, where he worked as a reporter. Suddenly the ticker tape machine began to spit out a long paper thread. Hank routinely picked up the thread. His nonchalance quickly changed. The American Field Service was looking for volunteers to drive ambulances. His gut tightened, remembering the article he had read and knew that this bell rang for him. He had to go.

In February of 1916, Hank rode in a rocking railroad car as cigarette smoke and bits of conversation, some in English, some in French, drifted back to him. He turned and gazed out the window and saw that the morning mist had cleared a bit, revealing a snow covered, rolling terrain that reminded him of Indiana. Yet the steep roofs, beige-and buff-colored stucco houses, as well as the Fiats at the crossroads, told him he was in a foreign land.

A hint of homesickness tugged at him as the train passed a company of French soldiers dressed in their horizon blue greatcoats. The soldiers were gathered around a field kitchen, tin plates in hand. Their foggy breath joined the steam rising from the stoves before the mixture dissipated into the cold air. Most of the men were unshaven or had some form of facial hair. That trait had earned them the nickname poilu, meaning “hairy one.”

Hank retrieved a copy of The London Times, already folded to an article about the Great War. The article included a picture that showed a poised lieutenant holding a whistle in one hand and a stopwatch in the other. Two enlisted men, with their helmets on, stood on either side of the lieutenant. The camera caught one man kissing a picture, perhaps his sweetheart or his mother, and the other one seemed to be finishing a prayer. In the background, a ladder leaned against the parapet. At zero hour, when the whistles sounded up and down the line, each man would dutifully climb the ladder in his sector.

At the top, upon entering No Man’s Land, the men would be met with a hail of bullets – delivering each man into the hands of fate. The dead, as much as possible, would be brought back at night. The wounded, too, would be carried back, if they had not been able to crawl back to the trench on their own. From the first-aid stations, to the clearing stations, to the hospitals, a procession of wounded would flow to the rear involving medics, doctors, nurses, orderlies and ambulance drivers, some of whom, like Hank, were volunteer Americans. So, in a sense, the lieutenant’s whistle blew for all of them.


The adventure had begun. 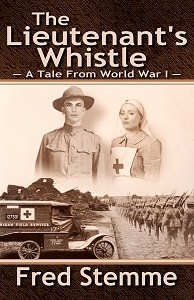 Synopsis of The Lieutenant's Whistle:


The sequel to Beguiling Dreams......Before America's entry into World War I, The American Field Service organized to help bleeding France. In thankfulness for France's aid during the Revolutionary War, young American males volunteered as ambulance drivers to repay their country's debt. Henry 'Hoop' Braddock is one such man. He and the boys of Section Two drive Model T ambulances, and are 'En Repos,' a unit awaiting assignment. One day, in a crowded, smoke-filled canteen in Bar-le-Duc, Hoop meets Kyla Laurens, a Scottish nurse. Her violet-colored eyes burn into his heart, branding him. As fate would have it, Hoop and Kyla end up serving at the same chateau-turned-hospital while the bloody battle to save Verdun ensues. At first, Hoop has precious little time to spend with Kyla due to the German attack. Instead, his time is spent driving his ambulance, all the while hearing the gruesome and touching detailed accounts of the fighting from injured soldiers riding in his cab. But later, once the pressure is off, a romance between Hoop and Kyla begins to flourish. Yet will experiences from Kyla's past prove fatal to their relationship?


The author has generously offered followers of HF-Connection.com a chance to win a copy of his new book!
If you would like to enter to win The Lieutenant's Whistle, please comment here with your email address. You may also enter by commenting on the post on our Facebook page.
Extra entries go out to those who share on their own Facebook pages, twitter, or google plus share.

Offer open in the USA and ends March 17th!
Posted by BurtonReview at Thursday, March 08, 2012