An Honourable Estate by Elizabeth Ashworth

Please welcome the author of An Honourable Estate, Elizabeth Ashworth: 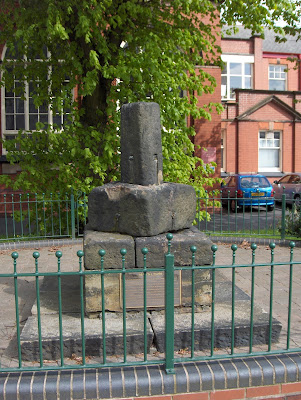 Mab’s Cross is an old wayside cross that is now placed outside a primary school in Wigan, in the north of England. Worn by the weather, it isn’t much to look at and you might pass it by without a second glance if you didn’t know the story that was attached to it. The legend tells that Lady Mabel de Haigh walked barefoot to this cross from her home at Haigh Hall as a penance for her adultery.

The story is well known locally and came to the attention of the novelist Sir Walter Scott. He writes about it in the introduction to his novel The Betrothed.

“The tradition, which the author knew very early in life, was told to him by the late Lady Balcarras. He was so much struck with it, that being at that time profuse of legendary lore, he inserted it in the shape of a note to Waverley, the first of his romantic offences. Had he then known, as he now does, the value of such a story, it is likely that, as directed in the inimitable receipt for making an epic poem, preserved in the Guardian, he would have kept it for some future opportunity.”


There are various versions of the legend and the one which Sir Walter Scott drew on can be found in the Bradshaigh Roll, an ornamental pedigree drawn up by Randle Holme of Chester in 1647. It recounts how Sir William Bradshaw married Mabel Norris, the heiress of Blackrod and Haigh. After the marriage he was absent for ten years in the ‘holy wars’ and when he returned he found that Mabel had married a Welsh knight. On Sir William’s return the intruder fled, but William chased him and killed him at Newton Park where a red coloured stone still supposedly marks the spot of the murder.

In his preface, Scott goes on to discuss the real people and places associated with the legend. He says:

“There were many vestiges around Haigh Hall, both of the Catholic penances of the Lady Mabel, and the history of this unfortunate transaction in particular; the whole history was within the memory of man portrayed upon a glass window in the hall, where unfortunately it has not been preserved. Mab's Cross is still extant. An old ruinous building is said to have been the place where the Lady Mabel was condemned to render penance, by walking hither from Haigh Hall barefooted and barelegged for the performance of her devotions. This relic, to which an anecdote so curious is annexed, is now unfortunately ruinous.”

Although the story of Sir William and Lady Mabel is known as a legend, there is some truth in it. They were real people and are buried in a chantry chapel at Wigan parish church. Their effigies can still be seen there. 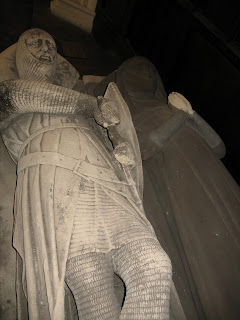 Another 19th century Lancashire novelist and historian, John Roby, who also wrote a version of the legend in his book Traditions of Lancashire remarked in 1829 that, “Time and whitewash have altogether defaced the effigies of the knight and lady on the tomb.” After that, some restoration work was been done. The effigy of Mabel was re-chiselled and a new effigy of Sir William was made.

The original Haigh Hall was demolished in the early 1800s to make way for a new house that can be seen today. Canon Bridgeman in his History of Wigan Church and Manor says that the original hall had a gallery, which was said to be haunted by the ghost of Lady Mabel, as well as a chapel and a confessional.

In the 1930s, Rev. T.C. Porteus, who was a local clergyman and historian, wrote a booklet called New Light on the Mab’s Cross Legend and in it Porteus compares the legendary stories with the historical events of the time.

Sir William was a Member of Parliament for Lancashire in the 6th, 8th and 19th years of the reign of Edward II – before and after his long absence from home. He was, at first, a follower of Thomas, Earl of Lancaster and was named amongst the earl’s adherents in a pardon granted for the death of Piers Gaveston. But in 1315 he joined the Banastre Rebellion. Porteus points out that the seven years when William was absent from home coincide with the years from the failed rebellion of 1315 until the execution of the Earl of Lancaster as a traitor in 1322. An inquiry into the ownership of the lands at Haigh in June 1318, states that William Bradshaw had been outlawed.

In 1319 Lady Mabel stated that her husband was dead. She is said to have married a second husband, but there is no documentary evidence and the suggested identities of the man range from ‘a Welsh knight’, Sir Henry Teuther, Osmond Neville to Sir Peter Lymesey, who is mentioned in the 1318 enquiry when Mabel is described as ‘intruding’ on the lands – in other words refusing to give them up.

After the execution of Thomas of Lancaster, Sir William Bradshaw received a pardon from the king and returned home, taking up his seat in parliament once again in 1328. The matters of Lady Mabel’s bigamous marriage and her subsequent penance remain open to speculation. Whether she did walk barefoot to the stone cross, once, or even weekly, is not known for sure. But as Sir Walter Scott and I agree, it’s a wonderful story for a novelist.

*Elizabeth Ashworth’s novel An Honourable Estate, based on the legend of Mab’s Cross in now available as a paperback and an ebook from Amazon. 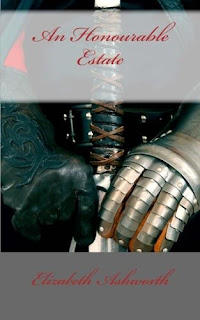