In writing The Prince’s Doom, the highlight was my return to Verona last year. The trip was arranged for the release of the Italian edition of The Master Of Verona, the first book in the series, and marked my fourth time in the city in the last 20 years. The first and third times I was there for pure tourism, staying for less than a day. But the second time was a heavy research trip, as was this latest one.

I could go on and on about having access I’d never been granted before (I got to sit in Cangrande’s chair!). I could talk about the places I’d never heard of, that became huge pieces of the novel (Santa Maria in Stelle!). But there was one event that bookended the two research trips perfectly. So it starts, as all my good stories do, with my wife.

My wife and I eloped in 2002, taking all the money we would have spent on a big wedding and spending it on the honeymoon instead. Which meant we were in Europe for over three months, exploring, making friends, and doing research. Eight days of that time was spent in Verona, as guests of the city. I had made a friend in the Ministry of Culture, and among the many wonderful people she connected me with, one was the descendent of Dante, still living on the vineyard bought in 1353 by Dante’s son Pietro (who just happened to be the lead character of the novel I was writing).

That first visit was memorable, to say the least, and my wife wrote an account of it here. (Do read it, it’s hilarious) (http://themasterofverona.typepad.com/the_master_of_verona/2012/06/guest-post-jan-blixt-and-coffee-with-the-count.html). He showed us the marriage carriage that was used when the family linked itself to the Serego clan, another famous Veronese family. We saw the family crest inlaid in the floor and over the mantle, beside framed photos of the Count's daughters. 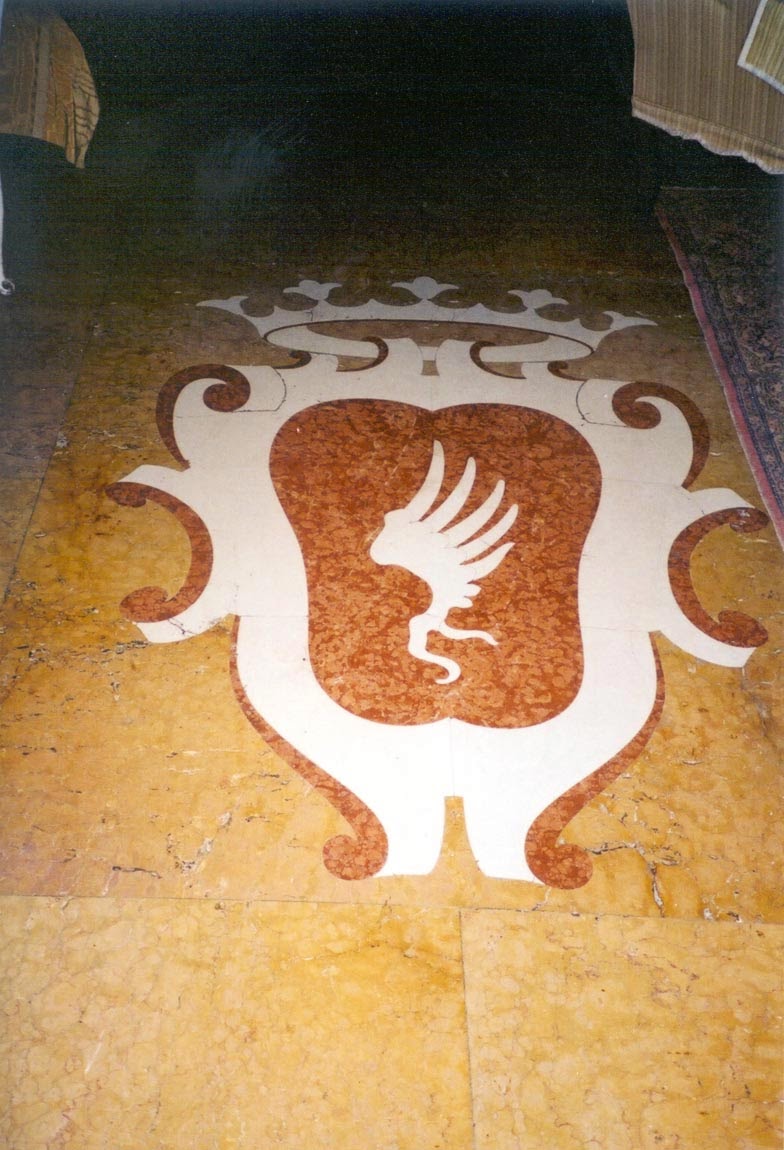 This is one of the things I like best about Verona. Everything is still in use. From the Arena, where they hold operas and concerts, to Cangrande's palace, which is not only the city hall but also houses the apartment of the chief of police, to a lovely condo Jan and I toured, with famous 19th century paintings the size of half a basketball court on the walls. They maintain the old, but with the new. Nothing is kept out of use, but rather worked seamlessly into daily life.

So that was then. This time, 12 years later, it was filmmaker Anna Lerario, a new friend, who put me back in contact with the Count. We called ahead, and then Anna drove us out to the Count's abode in the country. Valpolicella is much more built up than I remember, and indeed when we spoke, the Count lamented the overdevelopment that's been happening. He's very much a Lord Grantham type, but instead of clinging to tradition, his vineyard has partnered with MASI wines, gaining him a huge distribution for his products. He sees the building that's been happening as speculative, and ruining the land upon which they make their living.

Ever an elegant man, we sat down with him in the dining area of La Foresteria. I presented him with copies of all the Verona books - I'd sent one when MoV was first published, but it felt wonderful to hand him a copy in Italian as well. Then he, Jan, Anna, and I sat and talked.

The very best part was just letting the conversation wander. Before, I had only been interested in the 14th century history of the land. This time I looked around at the large courtyard, at the looming shadow of Monte Baldo to the north, and said, "How on earth did the villa survive the Second World War?" 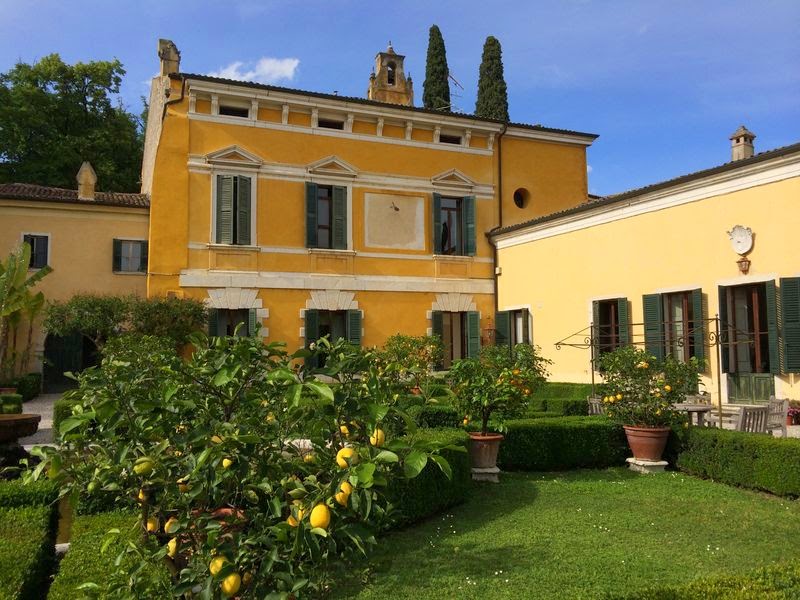 The Count looked at me in surprise. "Did I never tell you this story?" And he proceeded to relate how his father had saved the villa in 1945.

During the war, the Nazis used the villa as an outpost, first for troops, then as a munitions depot. The whole area sits at the foot of the Brenner Pass, the route the retreating Nazis would have to take. On April 22nd 1945 the order came to all Nazis still in Italy - retreat, and leave nothing for the Allies to use. For the Nazis stationed at La Foresteria, this meant blowing up all of the munitions - and the villa and village along with them.

That night, the Count's father invited the Nazi commander to a farewell dinner, and produced his best bottles of the wine grown on the land. He then proceeded to get the man drunk, talking all the time about this history of the villa, of the people in the village. He then offered the commander a way to obey his orders without blowing up anything. What if they transported all the munitions to the river and disposed of them there? The ordinance would be useless, and no one would be hurt.

The Nazi commander agreed in theory, but could not spare the men to do the work, not when they would be pulling back the next day. So late in the night the Count's father roused the whole village. Under the watchful eyes of a few Nazi soldiers, the villagers carried the explosives to the river and threw them in. By dawn of April 23rd, the munitons were all ruined and gone. The villagers were just beginning to relax when they heard a massive explosion from across the valley. Another village had not been so fortunate - the Nazi commander there had obeyed his orders to the letter.
The Nazis pulled out, and April 24th was V-I Day - Victory in Italy.

It did not escape me, of course, that the action of the story took place in the small hours of April 23rd. My wedding anniversary. Also Shakespeare's birthday. Serendipity seems to follow Shakespeare, Verona, and me.

After telling us that story, the Count arranged for Jan and I to have dinner in a nearby restaurant (we later discovered he’d had them open just for us). Before we parted for the evening, I asked a favor. I had a photo of the Count and me standing beside his villa from 2002. Could we repeat the photograph? He agreed, and promised to meet me there in another dozen years. 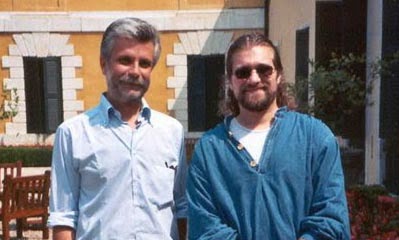 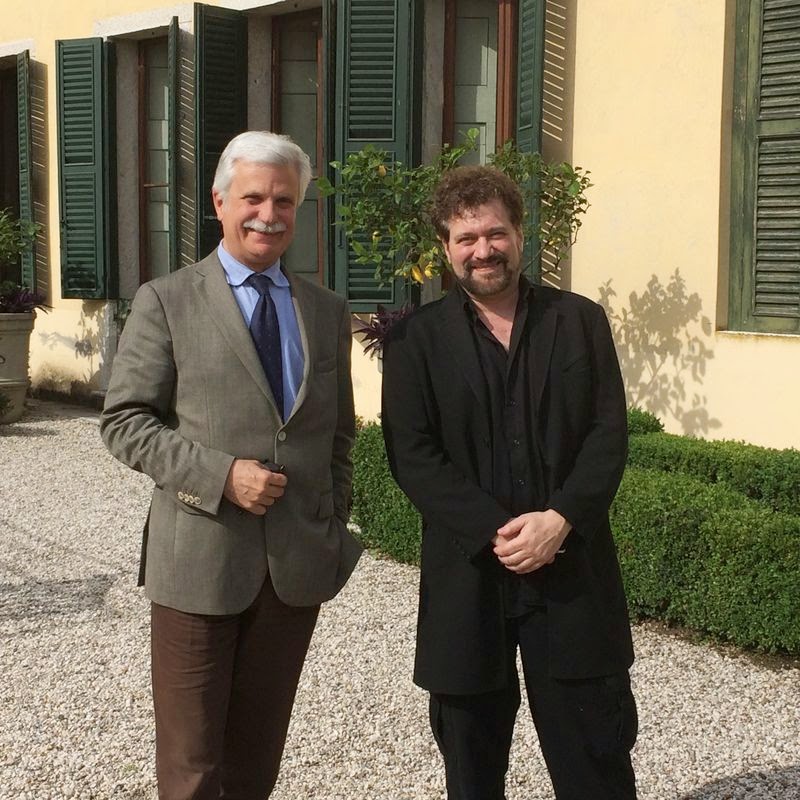 It is wonderful to think that the ancestor of this charming, graceful, and warm man is the same person I’ve been striving to bring to life in the pages of four novels. Of all the characters I’ve ever written, Pietro Alaghieri is the one I admire most. I can’t help but wonder how much of that is due to having spent time in the presence of his heir, on land Pietro himself owned. Even 750 years after his death, Pietro remains vibrant and alive to me. I hope to you as well. The long-awaited explosive fourth novel in the Star-Cross'd series! Verona has won its war with Padua, but lost its war with the stars. The young prodigy Cesco now turns his troubled brilliance to darker purposes, embracing a riotous life and challenging not only the lord of Verona and the Church, but the stars themselves. Trying desperately to salvage what's left of his spirit, for once Pietro Alaghieri welcomes the plots and intrigues of the Veronese court, hoping they will shake the young man out of his torpor. But when the first body falls, it becomes clear that this new game is deadly, one that will doom them all.

'For anyone who has yet to read David's novels, you are about to hit the literary lottery. Yes, he's that good.' --Sharon Kay Penman, The Sunne In Splendour

'David Blixt is a master of historical fiction. Dramatic, vivid, superbly researched, this series captures Renaissance Italy in all its heady glamour and lethal intrigue.' --C.W. Gortner, The Tudor Conspiracy

'This is one of the most exciting, and satisfying, reads that I have immersed myself in for a long time. David Blixt is a gem of a writer.' --Helen Hollick, The Pendragon Chronicles

Based on the plays of William Shakespeare, the poetry of Dante, and the history of Italy, the Star-Cross'd Series is a tale of wars won, friendships lost, and conspiracies both mortal and stellar, an epic journey into the birth of the Renaissance that recalls the best of Bernard Cornwell and Dorothy Dunnett.

Titles in the Star Cross'd Series Author and playwright David Blixt's work is consistently described as "intricate," "taut," and "breathtaking." A writer of Historical Fiction, his novels span the early Roman Empire (the COLOSSUS series, his play EVE OF IDES) to early Renaissance Italy (the STAR-CROSS'D series, including THE MASTER OF VERONA, VOICE OF THE FALCONER, FORTUNE'S FOOL, and THE PRINCE’S DOOM) up through the Elizabethan era (his delightful espionage comedy HER MAJESTY'S WILL, starring Will Shakespeare and Kit Marlowe as inept spies). His novels combine a love of the theatre with a deep respect for the quirks and passions of history. As the Historical Novel Society said, "Be prepared to burn the midnight oil. It's well worth it." Living in Chicago with his wife and two children, David describes himself as "actor, author, father, husband. In reverse order."

Monday, March 16
Review at Book Nerd
Spotlight at What Is That Book About

Wednesday, March 18
Review, Guest Post, & Giveaway at With Her Nose Stuck in a Book
Spotlight at CelticLady's Reviews

Saturday, March 21
Spotlight & Giveaway at So Many Precious Books, So Little Time

Wednesday, April 1
Excerpt & Giveaway at Peeking Between the Pages