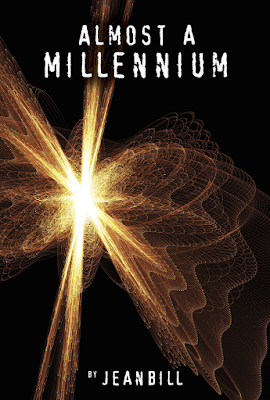 My inspiration for writing Almost a Millennium, why I chose the medieval period, and what is unique about this book:

In the early years of planning this book, the year 2000 would soon be here—the word “millennium” began appearing in the media. That word seemed to have penetrated my subconscious brain, provoking the thought in my consciousness that I could separate the two protagonists by geography and time, another land and one thousand years. How in the world are they going to make contact? I did not have the slightest idea. At that time, I was reading about cryptography and while we were in Switzerland and England, we decided to visit several monasteries. Then, it all seemed to come together. I would have the atheist be an American physician, whom I knew something about, and make the believer in God a monk in England. When? One thousand years ago in England, William, the Duke of Normandy, decided to invade and conquer England. From that data, I began to write all my thoughts about it, realizing I had to hit the books about that period in English history. But, how in the world are the two protagonists going to have contact?

Our monk has to have a personal experience with God, and be aware of the Pope’s decision to foster a crusade to Jerusalem that resulted in the killing of many Jewish people of which the monk highly criticized. Since he was a scribe he decided to write about the two events, but an acting abbot squelched his writing. Later on, he learned about cryptography, giving him the idea to cipher his writing. This is the only way that the monk could have contact with the atheist. Of course, the atheist’s contact was his cryptanalysis of the writings of the monk.

My book is unique in that it is divided into three parts. Every third chapter deals with the American physician, the same for the monk, and the other third deals with the history of the medieval period relating to the two fictional stories. I never thought I would have a chapter referring to Mohammed, but I had to in order to tell about the Arabs contribution to history and education in the 800s. Another unique aspect of the book is the introduction of new characters at the beginning of the chapters, dealing with the fictional stories.

One of the most difficult challenges was to have the monk be at certain locations at a certain time where and when historical events happened: the killing of monks at Glastonbury Abbey, the Jewish killings in Mainz, and the early period of Llanthony Abbey in Wales.


About the book
Almost a Millennium, by Jeanbill, was published in January 2015 and is available for sale on Amazon. Genres: Historical / Fiction / Medieval / Religion / Theism

Almost a Millennium is an eclectic novel about the unlikely connection between an English monk and an American physician that lived nearly 1,000 years apart, one of today and one in the medieval period. It begins at their birth, traveling through time to their adulthood.

Using cryptography, Paul, a monk at Llanthony Abbey in Wales, writes a four-page document about his life and a harsh critique of the crusades. He places his writings in safekeeping in the hope that it will survive the crusades and eventually land in the hands of someone who can decipher his secrets. When Fred unexpectedly comes across Paul’s book and ciphers Paul’s cryptic message, he has no idea that four pages of millennial history will challenge him to rethink Christianity.

“Almost a Millennium by Jeanbill is a deeply compelling historical fiction novel. Although a work of fiction, the story is a depiction of England's history and the power dynamics at the time. It is a richly detailed story and many times I found myself forgetting that I was reading a work of fiction as the historical events described felt very authentic. The setting of the story and the character development were simply amazing as we dived into Paul and Fred's compelling background stories. Paul and Fred were two people so different and yet so alike. The pace of the story was set from the beginning and this held true to the very last page. Jeanbill used a unique and very captivating style in developing this story.” - Reviewed by Faridah Nassozi for Readers’ Favorite


About the Author
Jeanbill has been associated with medicine for more than 50 years, practicing as a general practitioner. He studied many hours in the medieval library of University of Notre Dame, researched and wrote over a period of 20 years in his spare time.


His debut novel Almost a Millennium was published in January 2015 and is available for sale on Amazon. Genres: Historical / Fiction / Medieval / Religion / Theism

Jeanbill resides in Lynden, WA. Married to his other half for 57 years until cancer separated them, he has four children and 14 grandchildren.