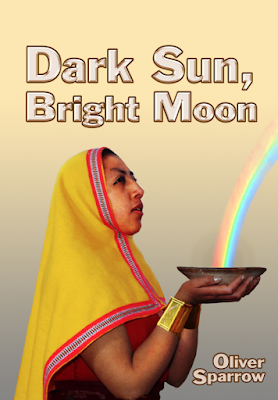 Dark Sun, Bright Moon.
The book is set a thousand years ago in Peru. It reflects the strange views that the isolated Quechua people had formed during their ten thousand years of isolation. I myself first encountered this outlook in 1980, when Peru was a rough country engaged in the early stages of a brutal civil war.

I met my first shaman in Oxapampa, a remote town hanging in mist over the jungle proper. It had been founded by German emigres a hundred years earlier, and red faced blond men held donkeys in the main square, bargaining in accented Spanish.

Even getting there was a major exercise. In 1980, barely any of the principal roads were asphalted, and none of the lesser track. After you have ground your way up from the desert coast to 15,700 feet at the Ticlio pass, therefore, you wander through open, sere landscape that is dotted with llamas and alpacas. A sudden drop takes you to the pretty Tarma valley with its fields of gladioli and arums. On my first visit, this was still a red-tiled village with a single-track road that, a few miles later, fell down the walls of the vast cañon that opened to the tropical Chanchamayo valley. Fragrant with coffee and mangos, enshrouded in red dust, enormous trucks confronted you on this road and necessitated reversing for long distances to let them pass. The river was a little thread below, the road between a rock wall and a sheer fall At night, festooned with Christmas tree lights and covered with tinsel, these sudden apparitions could give way to nobody, even if they were minded to do so.

In twelve hours, therefore, you had gone from frigid desert to alpine extremes and then, in perhaps three of those hours, dropped down into the humid tropics. Clothing changed three times, and both customs and accents more times than that. Seagulls and pelicans are replaced by macaws and parrots. Chanchamayo was then an armed camp, as groups struggled to control the coffee trade, and it was a relief to climb into the Oxapampa valley. This was and remains a place of jungle dwellers and dripping, orchid-filled cloud forest. That ascent took a further six hours on disastrously terrible roads, but today all of this is demystified by tarmac and satnav.

The then-military government had imposed strict controls on vehicle imports, As a result, the company had only a thirty year old Land Rover which, on arriving in a coffee cooperative short of Oxoapampa, shuddered, grunted and passed its mortal bounds. The cooperative was celebrating a Saint’s day and everyone was mostly naked and sweaty drunk, gathering in a ring around the vehicle with their machetes just kissing the ground. The only light came from a bonfire, the houses were palm thatch and wood and any thought of a telephone would have been an anachronism.

Years earlier, I had damaged my back in another set of great mountains, and the gruelling journey had worsened this. I needed a pole just to get out of the car. We all stood and stared at each other until the head of the cooperative came forward, offered us a drink and suggested the services of the curandera, the healer. This was how I first met Esmeralda.

His Spanish was not good and I understood this to mean the village mechanic. I was therefore surprised by an elderly woman with sharp eyes who, without a word, she started pulling at my clothing. I have to say that I thought that this was the local mad woman, and was working out how to solve an awkward situation when the headman stopped me, saying that she, this person, was the curandera. She quickly had me shirtless and with my pants around my ankles, prodding at my back. Still without speaking, she grunted and turned away into the dark. “Esperate ahi”, wait here, said the headman, so I did, more or less naked in front of an audience of thirty rowdy drunks. Eventually, she returned with a pot of sweet-smelling paste. After she has sat me on a coffee sack and put my head between my knees she kneaded this into my back. This seemed to signify acceptance – or anyway the end of the fun - and the crowd dispersed, drinks were thrust on us and by one means or another, the pain faded away as well.

The next day, watched by men cradling hangovers, we identified the problem as being a dead fuel pump. There was no prospect of replacing this. However, Land Rovers have their spare wheel mounted in front, and removing this gives access to the engine. A plastic pipe came off the air horn to give us a fuel feed line, and a funnel bought from the cooperative provided a way to drip fuel into it. My minder Archie was to drive, whilst I was to sit on the bonnet and drip petrol into the funnel.

Before we left, Esmeralda let it be known that she wanted to travel to Lima with us, and so it was that we set out on a journey of three patient days. I learned quickly how perform as a human carburettor, dripping the fuel and clearing dust out of the ball-of-wool filer, I froze at Ticlio, and was happy to get into the cabin as we freewheeled down the face of the Andes to the first workshop we found on the outskirts of Lima.

Esmeralda vanished in the crowd without adding to the few word that she has spoken throughout. She had my address, however, and she made contact through the medium of dolls made from tied scraps of cloth and left on the doorstep overnight.

One evening, just as I was planning to return and complete the business that had had been aborted by the death of the Land River, she turned up in person. This began a friendship that took me into the strange arenas that Dark Sun, Bright Moon explores: the parallel continua that create our little world, the role of the shaman, the yachaq', to belief in a propitiation of the apus that guard and manage individual communities, to the saqras who may manifest themselves to favoured individuals.

Later, I learned that hers was a thin, distorted version of the original rich worldview. Five hundred years of repression had all but extinguished anything but a folk version of what had been a high metaphysic. Despite this, the essence of this view – of the individual as an expression of a community, of the danger to the community from disharmony amongst individuals – remains a vital element in today’s Andean communities, wound into Catholicism through syncretic beliefs. The local apu is now called San Pedro (St Peter) but they still go up the mountain to dance for him and feed him beer, or sacrifice a guinea pig or, for serious matters, a llama. Dark Sun, Bright Moon is an attempt to reconstruct this very different way of seeing the world. I hope that readers think that it succeeds. You can see feedback of their views at www.DarkSunBrightMoon.com

About the book
Dark Sun, Bright Moon, by Oliver Sparrow, was published in July 2014 and is available for sale on Amazon in both paperback and ebook.

“Dark Sun, Bright Moon describes people isolated in the Andes, without the least notion of outsiders. They evolve an understanding of the universe that is complementary to our own but a great deal wider. The book explores events of a thousand years ago, events which fit with what we know of the region's history,” says Sparrow.

In the Andes of a thousand years ago, the Huari empire is sick. Its communities are being eaten from within by a plague, a contagion that is not of the body but of something far deeper, a plague that has taken their collective spirit. Rooting out this parasite is a task that is laid upon Q’ilyasisa, a young woman from an obscure little village on the forgotten borders of the Huari empire.

This impossible mission is imposed on her by a vast mind, a sentience that has ambitions to shape all human life. Her response to this entails confrontations on sacrificial pyramids, long journeys through the Amazonian jungle and the establishment of not just one but two new empires. Her legacy shapes future Andean civilization for the next four hundred years, until the arrival of the Spanish.

Dark Sun, Bright Moon takes the reader on a fascinating adventure that includes human sacrifice, communities eaten from within, a vast mind blazing under the mud of Lake Titicaca, and the rise and fall of empires cruel and kind. 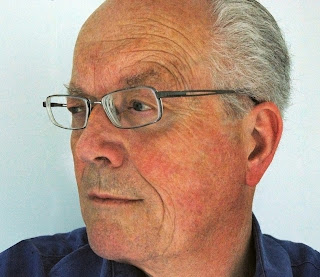 About the Author
Oliver Sparrow was born in the Bahamas, raised in Africa and educated at Oxford to post-doctorate level, as a biologist with a strong line in computer science. He spent the majority of his working life with Shell, the oil company, which took him into the Peruvian jungle for the first time. He was a director at the Royal Institute for International Affairs, Chatham House for five years. He has started numerous companies, one of them in Peru, which mines for gold. This organisation funded a program of photographing the more accessible parts of Peru, and the results can be seen at http://www.all-peru.info. Oliver knows modern Peru very well, and has visited all of the physical sites that are described in his book Dark Sun, Bright Moon.

To learn more, go to http://www.darksunbrightmoon.com/