The Tiger and the Dove Trilogy - Black Friday/Cyber Monday Sale! 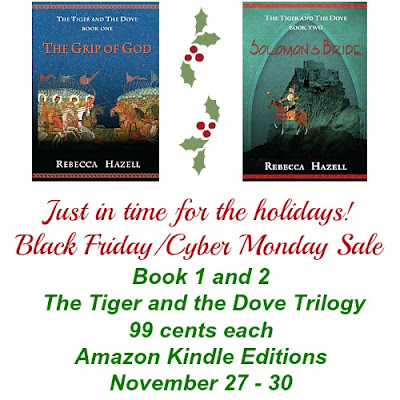 Books 1 and 2 of the Tiger and the Dove trilogy will be 99 cents (each) on Amazon for Kindle this Friday (tomorrow) through Monday! You don't want to miss this excellent historical fiction series. It would make a great gift for the Kindle book readers in your family, or among your friends. (And Book 3 will be on sale next week!)

Book 1 - The Grip of God  Buy the Book
The Grip of God is the first novel in an epic historical trilogy, The Tiger and the Dove. Set in the thirteenth century, its heroine, Sofia, is a young princess of Kievan Rus. She begins her story by recounting her capture in battle and life of slavery to a young army captain in the Mongol armies that are flooding Europe. Not only is her life shattered, it is threatened by the bitter rivalries in her new master’s powerful family, and shadowed by the leader of the Mongol invasion, Batu Khan, Genghis Khan’s grandson. How will she learn to survive in a world of total war, much less rediscover the love she once took for granted? Always seeking to escape and menaced by outer enemies and inner turmoil, where can she find safe haven even if she can break free? Clear eyed and intelligent, Sofia could be a character from The Game of Thrones, but she refuses to believe that life is solely about the strong dominating the weak or about taking endless revenge. Her story is based on actual historical events, which haunt her destiny. Like an intelligent Forrest Gump, she reflects her times. But as she matures, she learns to reflect on them as well, and to transcend their fetters. In doing so, she recreates a lost era for us, her readers.

Book 2 - Solomon's Bride  Buy the Book
Solomon’s Bride is the dramatic sequel to The Grip of God. Sofia, the heroine, a former princess from Kievan Rus’ was enslaved by a Mongol nobleman and then taken as a concubine by the leader of the Mongol invasions, Batu Khan, grandson of Genghis Khan. Now, having fled the Mongols with a price on her head, Sofia escapes into Persia and what she believes will be safety, only to fall into the clutches of the Assassins, who seek to disrupt the Mongol empire. In a world at war, both outer and inner, the second phase of her adventures unfolds. Can she ever find safe haven, much less the lost love and family that was almost destroyed by the Mongols?

Email ThisBlogThis!Share to TwitterShare to FacebookShare to Pinterest
Labels: historical fiction, Rebecca Hazell, The Tiger and the Dove trilogy