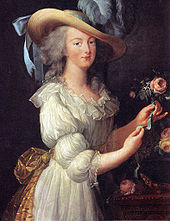 I recently chimed in on one of the history threads on Facebook that asked who was the most maligned historical figure.  There were a lot of votes for Richard III; and perhaps the recent discovery of the bones beneath a British car park will reveal (if they indeed belong to Richard), that he was never hunchbacked or had a withered arm. And we do know that Shakespeare, a Tudor-era scribe, derived the, well, bare bones, of his character from other men on the Tudor payroll who never knew Richard; those like Holinshed and Thomas More.

But Richard brought his destiny upon himself. He DID usurp the throne and he did murder any adults he believed were standing in his way, even if you set aside the possibility that he had something to do with the death of his nephews. 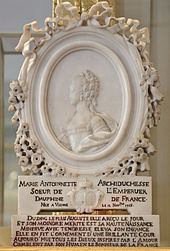 I made the case for Marie Antoinette as history’s most maligned personage. From the moment she crossed the imaginary threshold between Austria and France on the Ile des Epis, she was considered by those in her adopted country as an outsider: the other. In fact, some members of the French royal family, as well as many courtiers who would soon be assigned to serve her, were against her marriage from the start. Austria had been France’s enemy for 950 years or so before the treaty that cemented their alliance. Ancient grudges were not so easily patched up by a union between a pair of teenagers.

Marie Antoinette had been urged by her mother, the formidable empress of Austria Maria Theresa, to use (in the empress’s view) her only asset—charm—to win over her future subjects. But not everyone was delighted by the young girl’s winsomeness, especially when Marie Antoinette chafed at the rigid court etiquette of the Bourbons or when she alienated the king’s mistress, the luscious Madame du Barry, because she was raised to detest such immorality. Poor Marie Antoinette was far too young, having come to France at the age of 14 (I tried to imagine my niece at that age being ready to rule a kingdom in a few years’ time!) too naïve, and too politically inept to see the larger picture. In the case of the comtesse du Barry, she got caught up in seeing the individual trees and missed the forest. Months passed while she refused to countenance the royal favorite on moral grounds, angering the king, while her mother desperately needed her to obtain his acquiescence for a much larger political gain: the partition of Poland. In the grand scheme of things, this was far more significant than an adulterous affair, but Marie Antoinette had been raised properly and couldn’t understand why her mother suddenly expected her to accept this liaison when she had always schooled her to despise adulterers. 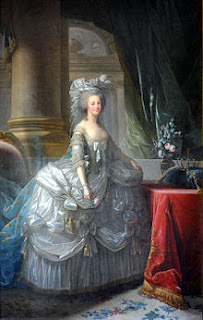 Marie Antoinette was damned if she did and damned if she didn’t in other areas as well. During the 1770s when she dressed opulently, as befitting a queen, with the wildly fashionably coiffures known as “poufs,” she was condemned for her extravagance.  Yet in the early 1780s when she began to wear the understated white muslin gowns with pastel-hued sashes known as gaulles or chemises à la reine, accessorized with simple straw hats, she was derided for looking like she was only wearing her undergarments and dressing like a peasant. In both instances, she was accused of bankrupting the country, by instigating the women of France to follow her expensive fashion trends.

Of course, Marie Antoinette’s passion for fashion did not bankrupt the country. France was in dire economic straits long before her husband acceded to the throne. His predecessor, his grandfather Louis XV, plunged France into the red fighting the Seven Years War when Marie Antoinette was still a child in Austria. And during the reign of Louis XVI and Marie Antoinette, they pledged a tremendous amount of money to help the American colonists fight their own revolution against the English crown. Although it seemed against their own interests to bring down a monarchy, the aim was to weaken Britain, France’s greatest enemy. Add to that a series of bad harvests and terrible winters that led to rampant starvation.  Never mind acts of Nature: the people blamed Marie Antoinette for all their ills, thanks to the demagoguery of men like the king’s own cousin, the deep pocketed, and ambitious, duc d’Orleans. The duc fancied himself a progressive, and would eventually vote to execute Louis XVI, yet he would ultimately be sent to the guillotine himself. 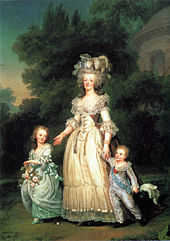 Marie Antoinette and Louis didn’t consummate their marriage for several years, for a number of reasons that scholars and historians have debated for centuries. Based on the historical record, I have my own theories, which I dramatize in DAYS OF SPLENDOR, DAYS OF SORROW, as well as in the first novel in the trilogy, BECOMING MARIE ANTOINETTE. But Marie Antoinette had come to France to bear an heir to the Bourbon throne, and without a son, she was useless to the French, rapidly becoming a waste of time and space. As the years flew by without the desired heir, rumors flew as well—that she was indulging in extramarital affairs with lovers of both sexes (the French couldn’t conceive of the possibility that she was unhappily celibate all that time). But the truth is that Marie Antoinette adored children and couldn’t wait to become a mother! Denied this for so long, with nowhere else to focus as she had no political clout, she poured her energy elsewhere: into the pursuit of pleasure—high stakes gambling, late night dances and masquerades, and a mania for fashion, interior design, and the outré three-foot-high hairstyles.  So she was blamed for not conceiving an heir, as though it was her “fault,” and becoming a queen of pleasure instead, as though she preferred these pursuits (and/or the extramarital lovers she never had at the time) to the joys of childbearing. 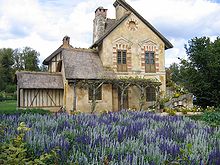 And when she sought refuge from her “toxic” detractors at le Petit Trianon, she was accused by the very same people of turning her rural idyll into an exclusive haven of rampant debauchery.

I wrote my Marie Antoinette trilogy to give her a voice, and to set the historical record straight, separating the truth from the centuries of  propaganda that have cast her as a tone-deaf, empty-headed spendthrift. While the books are historical fiction, they are heavily based on fact (there’s a bibliography at the back of each novel, in addition to an Author’s Note that explains where any liberties were taken with the historical record).

It’s high time that Marie Antoinette, miscast for more than two centuries as a villainess, steps into the sunlight as a heroine. 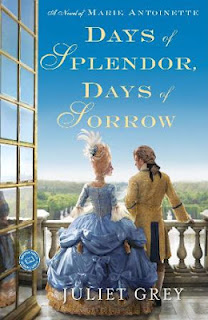 Juliet Grey is the author of Becoming Marie Antoinette. She has extensively researched European royalty and is a particular devotee of Marie Antoinette, as well as a classically trained professional actress with numerous portrayals of virgins, vixens, and villainesses to her credit. She and her husband divide their time between New York City and southern Vermont.

Her new novel, Days of Splendor, Days of Sorrow, was released in May 2012 from Ballantine Books.

Juliet is currently on tour with Historical Fiction Virtual Book Tours.  Visit Michelle's stop at The True Book Addict on November 1 for a review and giveaway.
Posted by Michelle Stockard Miller at Tuesday, October 09, 2012