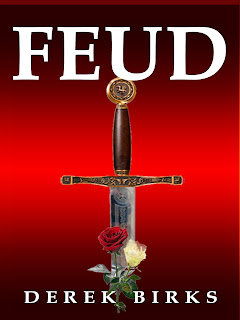 Feud is a tale of a bitter struggle against the odds, but it is also a love story.

Feud tells the story of a family caught up in the chaos of the Wars of the Roses. One sunny morning Ned Elder, a Yorkshire knight, finds his father has been executed, his brother killed, sisters abducted and his estates plundered by the neighbouring Radcliffe family. He flees with a few ill-assorted companions, but he resolves to regain what has been lost. To do so he seeks powerful help and to get it he must show his exceptional ability with a sword.

Meanwhile Ned’s sisters, the serious and conventional Emma and the tigerish, independent Eleanor, are fighting their own personal battles to free themselves from the Radcliffes.

The story – and the feud - reaches its climax in the aftermath of the bloody battle of Towton in 1461. Ned, his sisters, his companions in arms and the girl he loves find themselves fighting for their lives and right up to the last moment the outcome remains in doubt.

The Wannabe Usurper, a guest post by author Derek Birks:

I’ve always had a bit of a soft spot for Richard – you know, the infamous Yorkist usurper, the one who caused the deaths of thousands by his ruthless ambition and folly. No, not the one allegedly dug up in Leicester, Richard III, the other Yorkist called Richard - the Duke of York, not the Duke of Gloucester, that was his son. It was Richard, Duke of York who started all the carnage.


Richard, Duke of York has been consigned to history as a nearly man and there is some truth in that but it seems to me that Richard was a man who had destiny thrust upon him and then whipped away at the last moment. He stepped forward in response to the question: “Henry’s a real duffer, who wants to be king?” But then it was a case of: “Where do you think you’re going Richard?” He was given a taste of royal power and then it was snatched away. It would be a hard pill for anyone to swallow.

There he was, the leading nobleman in the land with a strong claim to the throne and he was saddled with a King, Henry VI, barely worthy of the title. He must have been mightily frustrated because as a man who was at least quite capable of organisation, administration and leadership, he must have resented the King who possessed no such capabilities.

Richard had also accumulated large debts fighting on Henry’s behalf during the French wars and what did he have to show for it? Alright, he had large landholdings and a family of dynastic proportions, but did he have the ear of the king? No. Was he a valued and trusted councillor? No, he wasn’t.

When Henry, the always impressive Queen Margaret, and their trusted adviser, Edmund Beaufort, Duke of Somerset sat down in the early 1450s for a cosy chat in the royal chamber, the Duke of York would have been a very large elephant in a very small room. Why? Because he was the heir presumptive and because the royal couple were still childless.


What must have been painfully obvious to York, as it was to Somerset, was that Henry was incapable of ruling without one of his noble councillors holding his hand. Would Richard have been content with such a position alone? I think his actions demonstrate that he probably would if the prospect had remained of receiving the crown at some point in the future, but the birth of an heir to Margaret rather stymied that possibility. Was that when Richard first considered seizing the throne? What I love about the Wars of the Roses is the endless uncertainties and this is a belter: at what point did York seriously contemplate taking the throne?

We don’t actually know and there are so many possibilities, not least when he was Protector on two occasions or when he removed his potential rival, Edmund Beaufort, at the first Battle of St Albans. Or when he was forced to abandon his army and family at Ludlow in 1459? Or after the Parliament of the Devils in November 1459 when he and the Nevilles were attainted? We’re not even really sure whether he planned to usurp the throne when he landed from Ireland in September 1460, but there seems little doubt that by his entry to London and the manner of it - sword carried before him, Duchess Cecily by his side and a large number of retainers behind him – the die was well and truly cast. And then…


And then – well, it’s an “oh, bugger!” moment because, when he lays his hand upon the throne and waits for the acclamation of the Parliamentary peers, the reaction is not so much ecstatic enthusiasm as embarrassed disbelief. Even his great ally, the irritating Richard, Neville, Earl of Warwick realises that there is little support for York.[Sorry about the word irritating but I’m afraid I really find Warwick a far less sympathetic character than York – but more of that another time.

I’m with York on this one: it surprises me too that the nobility were prepared to remain loyal to a King who had shown so little ability as a ruler – but they obviously were. Warwick understood this, but York was reluctant to accept it and who can blame him given the rollercoaster he had been on since 1450. It would not have been the first time English nobles had acquiesced in a realpolitik solution, so why did they not acclaim York?

As always they needed a powerful reason to overturn the status quo, however unsatisfactory it was – York did not give them such a reason. They acknowledged he had a strong claim but the throne had been settled upon the House of Lancaster for two generations and Henry now had a male heir, Prince Edward. Nor were the lords under pressure from below for though Richard had coveted popular support, it had never really materialised.


There is a great contrast here with his own son, Edward, Earl of March, a year or so later. Edward had the same claim as his father but he was also young and charismatic, he was a very effective battle commander and an inspirational warrior. Richard was none of these things and the Act of Accord in October 1460, whilst a political success, must have been a crushing personal defeat to him. His ultimate military failure at Wakefield at the end of 1460 brought his abortive royal campaign to an abrupt end.

Thus, though history regards his eldest son, Edward with some fondness: “bit of a lad, good company, shame about the wife” and his youngest son, Richard, as fertile ground for a raging controversy, the tendency with Richard of York is to treat him with mild disapproval, either because he sought the throne and destabilised the state in doing so or simply because he failed to get the throne.

The book FEUD is available on Kindle at http://www.amazon.com/dp/B008ZD9ABO
Derek’s website is www.derekbirks.com
Derek is on twitter at https://twitter.com/Feud_writer

Posted by BurtonReview at Monday, October 29, 2012

Email ThisBlogThis!Share to TwitterShare to FacebookShare to Pinterest
Labels: Wars of the Roses