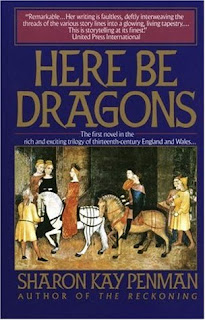 Thirteenth-century Wales is a divided country, ever at the mercy of England's ruthless, power-hungry King John. Then Llewelyn, Prince of North Wales, secures an uneasy truce with England by marrying the English king's beloved, illegitimate daughter, Joanna. Reluctant to wed her father's bitter enemy, Joanna slowly grows to love her charismatic and courageous husband who dreams of uniting Wales. But as John's attentions turn again and again to subduing Wales--and Llewelyn--Joanna must decide to which of these powerful men she owes her loyalty and love.

A sweeping novel of power and passion, loyalty and lives, this is the book that began the trilogy that includes FALLS THE SHADOW and THE RECKONING.

We discussed Chapter 1 through Chapter 16 here last week .. next week we will have our final discussion post where you can link your reviews, but now we are discussing anything including chapter 37.

Feel free to answer any and all discussion points below.. as well as asking your own questions in the comments, and anyone can jump in at any time.

Joanna matures and the marriage to Llewellyn becomes fruitful. What are your feelings of Llewelyn's eldest son, Gruffydd?

Joanna's brother Richard is a supporter of both Joanna and King John. Did you sense a divide inevitably occurring, and how did you judge Joanna's reaction?


The mystery of Arthur comes to a tense point with the de Braose family! What do you think of the actions of
King John against the family?

At the end of Chapter 25, King John states that the marriage he arranged for his daughter Joanna with Llewellyn was "a great mistake." What do you think he was fearing? Was he fearing for Joanna's well-being, or fearing a fight against her husband?

Davydd and Gruffydd's relationship has been strained from the start. Do you feel any empathy towards Gruffydd and his jealousy of his younger brother? Do you feel Joanna should have spoken with Llewellyn regarding Gruffydd's attitude towards the Norman English?

Posted by BurtonReview at Friday, October 26, 2012