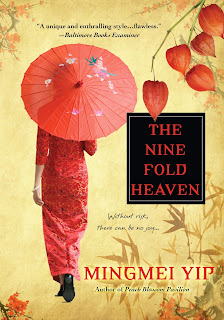 One day when Yuan was on his trip to take the imperial examination, he saw a hunter shooting at a pair of geese. One fell to the ground and died, the other one, instead of flying away, landed next to its partner, crying and hitting its head on the ground till it also bled to death. Deeply moved by the love suicide, Yuan wrote the above line which is known to many millions of Chinese. He also buried the two geese together and their grave became the famous “Geese Grave.”

Another line with a similar sentiment is from the three thousand year old Book of Poetry: “I’ll hold your hand and grow old with you.”

Yet another poem says, “In life, if our love is always like the first time we met, there will be no lover abandoned like an Autumn fan.” At the beginning love is sweet and passion deep. However, love that cannot stand the trial of time is only shallow infatuation. That is why the poem next says, “When in an instant love is gone, we just blame fickleness of the heart!”

In my new novel The Nine Fold Heaven, I tried to portray undying love, both between man and woman and between mother and child. Camilla, a spy assigned to assassinate a powerful gangster head – disastrously falls in love with her target’s son. Though she is told that their baby was stillborn, he appears in her dreams and she vows to find him, even though it means “going inside the tiger’s mouth.”

That night I flip-flopped in the hotel bed, thinking of the strange workings of fate. Then as if on cue, my little Jinjin came into my dream.

“Mama, I’ve been doing vey well, so don’t you worry about me.”

“Son, what have you been doing?”

“What have you learnt?’

“Can you tell me what they are?”

“Jinjin, karma is because we all do good and bad things.”

“But Mama, I hear you only do bad things.”

“Where do you hear this?”

“You know, what you read in the newspapers.”

“It’s not all true. Maybe before, but not anymore. I miss you and your father terribly. Recently I also saved your Uncle Gao’s life.... Jinjin, I hear you’re still alive so stop teasing your mother! I can’t take this anymore!”

My baby retorted. “Sometimes I can’t take you anymore!”

“Mama, you stop it! Or, I won’t come back to see you in your dreams anymore. And I’ll stay with Mama Lewinsky!” Then his voice softened. “Remember Mama, I’m your son, whether in hell, heaven, or the Red Dust.”

And with this, he vanished.

In this mesmerizing new novel, Mingmei Yip draw readers deeper into the exotic world of 1930s Shanghai first explored in Skeleton Women, and into the lives of the unforgettable Camilla, Shadow, and Rainbow Chang.

When Shadow, a gifted, ambitious magician, competed with the beautiful singer spy Camilla for the affections of organized crime leader Master Lung, she almost lost everything. Hiding out in Hong Kong, performing in a run-down circus, Shadow has no idea that Camilla, too, is on the run with her lover, Jinying – Lung’s son.

Yet while Camilla and Shadow were once enemies, now their only hope of freedom lies in joining forces to eliminate the ruthless gangster Big Brother Wang. Despite the danger, Shadow, Camilla, and Jinying return to Shanghai. Camilla also has her own secret agenda – she has heard a rumor that her baby son is alive. And in a city teeming with spies and rivals – including the vengeful gossip columnist Rainbow Chang – each battles for a future in a country on the verge of monumental change.

Praise for The Nine Fold Heaven

A guilty pleasure....enjoy the exotic location and characters.... This is a large, luscious box of chocolates. Go on. You know you want to." -RTBook 4 star Review, June 2012

Entertaining diversion is (a strength of this book) -Publisher's Weekly

What a phenomenal novel!! The characters are well-developed and the storyline is amazing and reads fast. So much is going on you won't be able to put the book down and you'll be turning the last page before you know it. I would highly recommend this novel to anyone. Great job Mingmei!!! -Bookbag Lady, June 13, 2012 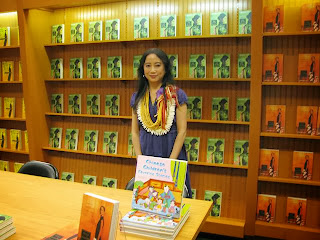 When she was a child, Mingmei Yip made up stories like “how the moon reached to slap the sun” and “how the dim sum on my plate suddenly got up to tango.” At fifteen, she was thrilled that not only her article got published but she was paid ten dollars for it. Now Mingmei is a best selling novelist and children’s book writer and illustrator.

Mingmei believes that one should, besides being entertained, also get something out of reading a novel. She has now twelve books to her credit, including five novels by Kensington Books: The Nine Fold Heaven, Skeleton Women, Song of the Silk Road, Petals from the Sky, and Peach Blossom Pavilion. Book Examiner praises her novels as “A unique and enthralling style…flawless.” Her two children’s books are Chinese Children’s Favorite Stories and Grandma Panda’s China Storybook, both by Tuttle Publishing.

Mingmei is accomplished in many other fields. A professional player of the Guqin, Chinese zither, for over thirty years, she was recently invited by Carnegie Hall to perform in “A Festival celebrating Chinese Culture” in the same program with cellist Yo Yo Ma and pianist Lang Lang. She had her solo Goddess exhibition at the New York Open Center Gallery to great acclaim, gave calligraphy workshop at New York’s Metropolitain Museum of Art, and Taichi at the International Women’s Writing Guild.