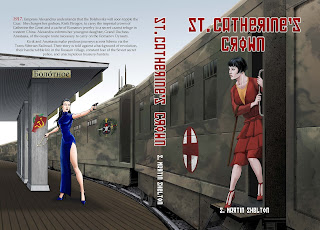 Please welcome Marty Shelton in celebration of the release of his novel St. Catherine's Crown.

Why I chose to write a historical novel about Anastasia Romanov

Since I was a nipper, the regicide of the Romanov royal family has held a singular fascination for me—especially the idea that Anastasia survived and was hiding in some exotic oriental location. Hawking this postulate were flimflam artists, magazine articles, newsreels of “new” discoveries, several books, motion-picture films (including the 1956 film staring Ingrid Bergman and Yul Brynner), female imposters, and charlatans of all stripes. The legend of her survival flourished. That is until in 1991 when DNA testing on a femur found in an unmarked grave proved conclusively that she died with her family at Ekaterinburg in July 1918.

Nonetheless, I could not let the legend die. Anastasia was an international icon of survival from the dreaded Soviet Union’s secret police, the Cheka. I would not let her fade into the dustbin of history. Shortly after I retired from the U. S. Navy, I began the research. After about a year, I’d developed a short story about Anastasia’s survival. It read Okay but it was lacking. I expanded it to a long short story. Still unsatisfied, I expanded my story of Anastasia to a novella. And there it sat for a year or so. I knew my novella raised more questions than it answered. Finally, I tackled the subject head on and several years later had a full-fledged manuscript. Notwithstanding with the keen help of several people: editors, artists, consultants, and pals that urged me to stick with it when I became frustrated at my dead ends.

About the book
Retired Naval Captain S. Martin Shelton’s 40+ years of military service, including active duty in the Korean and Vietnam wars, required that he travel throughout the world, with particular emphasis on the Far East. Shelton has an extensive background in Soviet and Chinese studies which fostered his interest in the 1917 Russian Revolution, the Bolshevik’s regicide of the Czar, Empress, and their five children, and the burgeoning Soviet Communist régime. Shelton’s particular interest in China focuses on the chaos during the 1930’s.

Shelton explores Russian History in his blog, and authored, St. Catherine’s Crown, an historical novel begging the question: What if Anastasia survived?

1917‐ Empress Alexandria understands that the Bolsheviks will soon topple the Czar. She charges her godson, Kirik Pirogov, to carry the imperial crown of Catherine the Great and a cache of Romanov jewelry to a secret czarist refuge in western China. Alexandra informs her youngest daughter, Grand Duchess Anastasia, of the escape route necessary to carry on the Romanov Dynasty.

Kirik and Anastasia make perilous journeys across Siberia via the Trans‐Siberian Railroad. Their story is told against a background of revolution, their hardscrabble life in the Russian village, constant fear of the Cheka (Soviet secret police), and unscrupulous treasure‐hunters.

St. Catherine’s Crown Excerpt:
The Romanov family rushes to dress and pack a few personal belongings. When the family arrives in the cellar, the Cheka sergeant tells them that their transportation will arrive shortly. A guard brings a chair for the Empress. For a moment, Alexandra’s heart fills with hope. If the Czech Legion and White Army are so near, rescue might be imminent. Soon they might all be free, on their way to England. She was right, she thinks, not to send Anastasia away on her own. Now the family will be together. She puts an arm around her youngest daughter’s waist. Thanks be to God.

Suddenly a squad of Cheka soldiers with their rifles at port arms marches single file and at double time into the cellar. After the last soldier is in position, the first sergeant commands, “Squad, halt! Right face.” The soldiers turn to face the Romanovs. After a moment, the sergeant shouts, “Squad, ah‐ten‐hut!” The sound of rifle butts hitting the concrete floor reverberates throughout the cellar.

Several minutes later, Major Vasili Yurovsky enters. He is the senior Cheka officer in the area. He wears the summer grey short‐sleeved tunic uniform with red piping and his major’s pips on the shoulder boards.

The soldiers bring their rifles to the present‐arms position to salute their commanding officer.

The Czarevich, Alexi, giggles in delight at the military prompt.

However, fear and concern race through the rest of the Romanov family. Alexandra knows exactly what is happening. The Czar, Anastasia, and her three sisters wonder what this military demonstration has to do with their rescue by the Whites or the Czech Legion.

“Order arms!” commands the sergeant. The soldiers return their rifles to their right side. The pounding of the rifle butts hitting the concrete floor sends chills through the Romanovs, causing them to wonder what is happening.

Yurovsky orders Alexandra to stand. She stares with smoldering hostility at Yurovsky. But, no longer enjoying the resources of royal status, she complies. After a moment or two she slowly moves a few paces to her left, next to Anastasia.

With his arms akimbo, Yurovsky walks down the line of the imperial family. He stops in front of each person and looks intently into their eyes. All but the Empress turn away from him. Summoning all her courage, she returns her most imperious glower of disdain. He smiles faintly at her feeble attempt at bravado.

The Czarevich is dressed in his sailor uniform. Maintaining proper military protocol, he salutes Yurovsky. The major stares at him contemptuously and does not return the salute.

Major Yurovsky turns to the first sergeant and snaps, “On my orders!”

Yurovsky moves to the cement steps and climbs three. “Port arms!” he shouts. He surveys the scene to ensure that the Romanovs are positioned correctly and that his soldiers are ready.

Satisfied that the staging is correct, Yurovsky commands, “Fix bayonets!”

There is a loud clanging of metal as the soldiers snap their bayonets onto their rifles.

Anastasia now understands with crystal clarity the task that her mother assigned to her so long ago. They are not going to be rescued, and she and her family are going to be murdered by the Bolsheviks. An overwhelming fear of death engulfs her. Her family is in this cellar for an execution. She fights to be brave and to hold back her tears. Her mother cannot help her.

“Load!” The soldiers pull back the bolts of their rifles, then jam the bolts forward, loading a round into the rifles’ chambers. The metal‐on‐metal clicking sends a vibration of horror through the cellar.

The other three daughters begin to sob and make the sign of the cross as they realize their fate is death. Alexandra commands, “Be brave. You are Romanovs. St. Nicholas will guide you.”

The Czar has been standing silently, as if he were in a dream. Aroused by the loud clicking of metal,
he exclaims, “What!”

The Romanovs see the loaded rifles with bayonets pointed at them. Their fate is all too clear. About the author
Captain Shelton earned his Bachelor of Science degree (Physics) from St. Mary’s University, San Antonio, and his Master of Arts in Cinema from the University of Southern California. For several years, he produced a host of information motion‐media shows, winning over forty awards in national and international film competitions and festivals. He was elected a fellow of the Society for Technical Communication and the Information Film Producers of America.


Shelton has published extensively in trade magazines, peer‐reviewed journals, and commercial publications. After retirement from the Naval Reserve, he completed his book Communicating Ideas with Film, Video, and Multimedia, which earned the Best of Show award in a major publication competition. He continued his writing completing his first novel St. Catherine’s Crown. He has authored a number of short stories and three novellas, all unpublished. Now he is working on his second novel, which he has titled Abyssinia. The narrative is set shortly after the conclusion of the Second Italian‐Abyssinian War in 1936.

Follow the instructions on the Rafflecopter form below to enter for a chance at one of five (5) digital copies of St. Catherine's Crown by Marty Shelton!