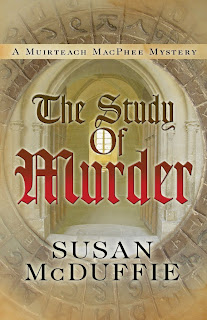 Please welcome Susan McDuffie as part of the virtual tour for her novel, The Study of Murder.

The Voynich Manuscript and the Study of Murder

In 1912 Wilfred Voynich purchased an unusual quarto, bringing an enigma to light that has confounded experts for the last 100 years, and inspired my latest mystery, THE STUDY OF MURDER.

The Voynich Manuscript, residing in Yale University’s Beinecke Library, consists of several sections; one a sort of herbal, another filled with strange cosmological drawings, a third, filled with strange drawings of nude nymphs frolicking in vaguely botanical vessels. The text, written in cypher, has baffled numerous cryptographers, including noted World War II code-breakers.

Theories about the strange manuscript range widely. Original speculation attributed it to Roger Bacon, the “Doctor Mirabilis” of 1200s Oxford. Others believe it an Elizabethan fake, perhaps the work of John Dee. The manuscript surfaced at the court of Emperor Rudolf II of Bohemia in the 1580s and was purchased by Voynich from a Jesuit college in Italy. A recent article in the New Yorker discussed new findings: the encrypted words vary section to section, as would be expected if the sections referred to different topics. But no one to date has cracked the code; the Voynich remains unread.

This tantalizing manuscript lies at the heart of THE STUDY OF MURDER, the third Muirteach MacPhee mystery. In 1374 Muirteach and his wife Mariota travel to Oxford, chaperoning the Lord of the Isles’ thirteen-year-old son Donald. Donald shows more interest in playing the lute and drinking than study, but some mysterious parchments intrigue him. An Oxford master is murdered, a beautiful tavern maid disappears, and Muirteach tracks an elusive and wily killer through a twisted labyrinth of deceit.

I hope you’ll enter Muirteach’s world and enjoy his adventures. You can find out more about all three Muirteach MacPhee mysteries on my website www.SusanMcDuffie.net or at www.facebook.com/SusanMcDuffieAuthor

The Study of Murder pits Scottish sleuth Muirteach MacPhee against a mysterious adversary in the medieval town of Oxford in 1374.At the command of the Lord of the Isles, Muirteach and his wife Mariota accompany Donald, the lord's surly thirteen-year-old son, to Oxford where Donald is to enroll in university. Shortly after their arrival a winsome tavern maid disappears. At his charge's insistence, Muirteach attempts to help Undersheriff Grymbaud with the investigation, as well as keep Donald at his studies and out of the taverns. He has little success with either venture, although the discovery of some bizarre and suggestive drawings on old parchments piques the curiosity of Donald and his peers. Meanwhile, Mariota thirsts to attend medical lectures at the schools, which are closed to women, and seeks a way to gain admittance to them. When an Oxford master is found brutally bludgeoned to death, Grymbaud asks Muirteach to investigate the slaying. The eventual arrest of an aged servant at the college stirs the ever-simmering discord between townsfolk and university students. The unrest culminates in riots and another senseless killing occurs, endangering Mariota. Gleaning clues from a cryptic manuscript and desperate to save his wife, a determined Muirteach tracks a wily killer through a dark and twisted labyrinth of deceit.

Praise for The Study of Murder

"THE STUDY OF MURDER is a worthy addition to Susan McDuffie's 14th century Hebridean mystery series. Muirteach and Mariota may be in an alien world, when they accompany the son of the Lord of the Isles to Oxford, but neither town nor gown can match their clever wits in solving crime. This book is a treat for those of us eager for a fresh era, well-integrated history, and a host of interesting characters." - Priscilla Royal, author of the Prioress Eleanor/Brother Thomas Mysteries 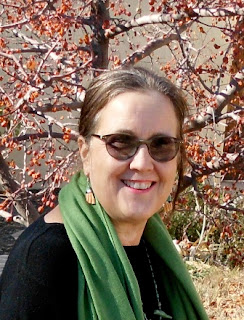 Susan McDuffie has been a fan of historical fiction since childhood. As a child, Susan spent such vast amounts of time reading historical fiction that she wondered if she was mistakenly born in the wrong century. As an adult her discovery that Clorox was not marketed prior to 1922 reconciled her to life in this era. Susan’s first published works were two Regency short stories in Regency Press anthologies.

Susan’s childhood interest in Scotland was fueled by stories of the McDuffie clan’s ancestral lands on Colonsay and their traditional role as “Keeper of the Records” for the Lord of the Isles. On her first visit to Scotland she hitchhiked her way through the Hebrides and the seeds for the medieval Muirteach MacPhee mysteries were planted.

The Muirteach mysteries include A MASS FOR THE DEAD (2006), THE FAERIE HILLS (2011), and THE STUDY OF MURDER (September 2013). The New Mexico Book Awards named THE FAERIE HILLS “Best Historical Novel” of 2011. Currently plotting Muirteach’s next adventure, Susan shares her life with a Native American artist and four unruly cats, and enjoys taking flamenco dance classes in her spare time. She loves to hear from readers and her website is www.SusanMcDuffie.net.

Visit the other tours for more guest posts, reviews and giveaways - HFVBT TOUR SCHEDULE
Follow the tour on Twitter - #StudyOfMurderTour