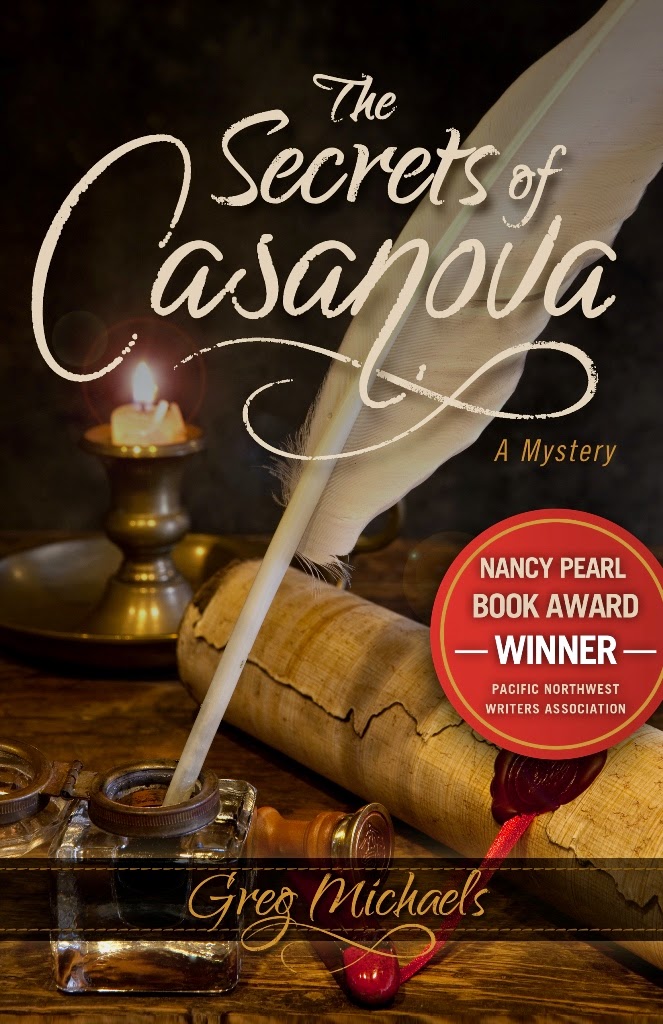 
(or “Channeling and Journaling”)


“THE SECRETS OF CASANOVA,” you say. “It must be one-hundred percent X-Rated. Casanova? Seductioneer! Fiendish heartbreaker. Why, even Merriam Webster uses ‘promiscuity’ and ‘unscrupulous lover’ to describe Casanova.”

“Well, I agree that seduction was often a preoccupation for Jacques Casanova but—“

“I’m not defending him but he did manage to do a few other things with his life. . .get a degree in law, study medicine, and early on—enter the priesthood. (Short-lived, as you might guess!) And yes, he was a charlatan, an author, a diplomat, duelist, spy, entrepreneur, a musician, gambler, librarian—and hold on, let me take a gander at my Casanova Action Figure—I actually own one (!)—he was also a soldier, alchemist, journalist, and cross-continent traveler (in a century when most people strayed less than ten miles from their home). In addition, the man achieved celebrity status throughout Europe when he escaped an inescapable prison in November, 1755.

“So you see, with my historical fiction I felt I had the luxury of being able to pick and choose from different parts of Casanova’s intriguing life. But back to the sexy, and to briefly digress, here’s a short example of how Casanova chose to write about his bedroom exploits: ‘Never have I undressed so quickly. Then it was her turn blindly to obey the promptings of instinct. She did not interrupt her transports and her ardors except to ask me if it was really true that I belonged to her. I spend two whole hours without ever separating from her. Her continual swoons made me immortal.’ If you ask me, a rather gentlemanly tone.

“Casanova writes about his romantic exploits in this way throughout his autobiography but, obviously, for my book, it had to be my voice. A voice that was authentic, one that would allow me to write vivid scenes, scenes that would keep the reader panting—and not laughing.

“It’s said that authors should write what they know. But what did I know about “...two whole hours...without ever separating”? About carnal gymnastics in a canopy bed? What first-hand experience did I have of
seducing a maid in a bathtub? How might I write a ménage a trois when I’d never done that, or even had that fantasy? (Yes, lots of guys do. I don’t.)

So, Dear Reader, here is the “Channeling and Journaling” Recipe that I ultimately adhered to when “writing the sexy.”

Step 1: Do thy homework. Tons of it. Read Casanova’s personal stories of romance and seduction. Flood your mind with his boudoir

Step 3: While you sleep, let the “channeling” begin; trust that Big Forces in your brain are at work. (I love Stephen Stills line from the song “Southern Cross:” “Spirits are using me, larger voices callin’.”)

Step 5: Trust that you’re the best author to REWRITE and REFINE.


Step 6: Show your written work to a reader and ask: “Whatdaya think?"

Do the sex scenes elicit a snicker? Or is her face flushed, her eyes passionately plumped, and her hair on fire? There’s your answer. You passed the audition! You’ve written the sexy.

Some people might say that the sensual scenarios I dreamed up are strictly wishful thinking. I don’t think so. It’s just good, ol’ Mother Nature helping out a desperate author.

So the Channeling and Journaling Recipe is pretty simple, isn’t it? Just wish that method would allow me to write a whole novel. Maybe some night it will.

And maybe that’s already happened for you. Please, let this author know.

Loosely based on the life of Jacques Casanova, The Secrets of Casanova is a rich, lush novel of love, sex, family, ambition, intrigue, and adventure. Set in Paris of 1755, Casanova's luck is fading and his past is shoving up against his present with potentially disastrous consequences. What price must he pay to uncover a treasure of inestimable value? What hearts must he break along the way? Casanova's will and destiny collide again and again in this riveting historical fiction that brings to light a man of great passion and not a few secrets.

Praise for The Secrets of CasanovaA Shakespearean actor with a flair for the dramatic and a superb ear for dialogue, Michaels's debut novel puts a brilliantly original spin on an historical figure whose very name is a clich. This Casanova must wrestle not only with falling hopelessly and passionately in love, but embarking on a mysterious quest that is as much a spiritual awakening as a swashbuckling adventure. The Secrets of Casanova is so erotic and so sensitively written, I found it difficult to believe its author was a man. -Robin Maxwell, national best-selling author of The Secret Diary of Anne Boleyn After receiving his B.A. in anthropology from the University of Texas at Austin, a chance experience thrust Greg into a career as a professional actor and fight director. To date he's acted in over fifty theater productions, more than forty television shows, and choreographed dozens of swordfights for stage and screen. In THE SECRETS OF CASANOVA, Greg again proves his skill at telling a theatrical story. He lives with his wife, two sons, and Andy the hamster.

Tuesday, October 14
Review at Flashlight Commentary
Review at With Her Nose Stick in a Book
Spotlight & Giveaway at Peeking Between the Pages

Friday, October 17
Review at A Chick Who Reads

Monday, October 20
Review at A Book Geek
Spotlight at CelticLady's Reviews
Spotlight & Giveaway at Passages to the Past

Wednesday, October 22
Review at WTF Are You Reading?
Review at Good Friends, Good Books and a Sleepy Conscience
Guest Post at Mina's Bookshelf

Thursday, October 23
Review at Beth's Book Reviews
Spotlight at What Is That Book About